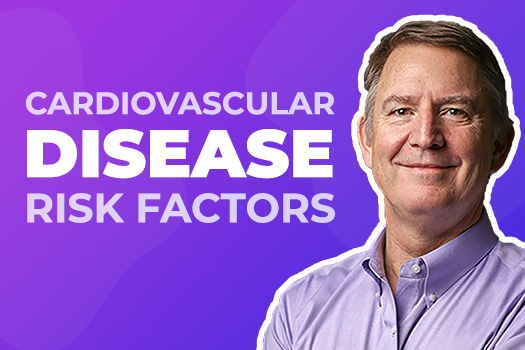 Atherosclerosis is damage of the arteries that leads to things like heart attacks, strokes, peripheral vascular disease, kidney failure and other conditions where the arteries get damaged and might become blocked or scarred internally. There’s a process that happens on the inside of the artery and your body tries to fix it; the fixing of it sometimes leaves scars. It’s not always a perfect fix. It’s a longstanding process of inflammation and repair that leads to narrowing and those problems we don’t want to have, like heart attacks and strokes. Still today, atherosclerosis is a major cause of mortality (death). You don’t want to have atherosclerosis if you can possibly avoid it.

Who is most at risk for atherosclerosis?

There’s a strong family history or genetic component. There’s an old saying that you can change a lot of things, but you can’t change who your parents were. You want to see if your family has a history of atherosclerosis – someone having a heart attack or a stroke, especially if they had those problems at an early age, meaning before the age of 55. The earlier the damage, the more genetic or hereditary it is. There’s also a very strong environmental component to the development of atherosclerosis, meaning where you live, what you do, what you eat. These are all important factors. I would say you’re dealt with the genetics that predispose you and your family to atherosclerosis. For example, in my family, there isn’t a strong history of atherosclerosis. When I look back at my parents’ grandparents, the one individual who did get atherosclerosis, had diabetes.

Diabetes is probably the strongest risk factor for developing atherosclerosis. We all know that diabetes is a bad thing, but you don’t want to just “manage” diabetes – you want to reverse it and fix it if at all possible. Then come the other metabolic problems like high blood pressure. Long-standing high blood pressure puts strain and stress on these pipes, the tubes of the arteries. In the bloodstream, metabolic syndrome—which is high triglycerides, low HDL—is also a predisposition for atherosclerosis. Obesity is a strong risk factor and smoking is in there as well. That’s a modifiable risk factor. If you can’t quit on your own, there are lots of drugs and nicotine products that can help you, and even specialists that help you quit smoking.

Way down at the bottom are the traditional things that doctors talk about today that really aren’t all that impactful. These include total cholesterol and LDL, which are really minor players, but they’re brought up as big issues because we have lots of medications that can treat them. It’s been such a focus of our internal medicine and cardiology field for so long, that most doctors don’t understand that there are these other modifiable risk factors as well – lifestyle change is probably the most important, and if you have diabetes or pre-diabetes, you want to turn those around. Don’t go down that pathway anymore.

I recall a relative of mine who didn’t have heart disease had an executive physical – some companies value their executives, so they do physical – and they recommended a treadmill test. This test showed there might be a heart problem. The next step test involved a heart catheterization, where you put a contrast material or a dye into the arteries and it turned out he didn’t have heart disease after all – the treadmill test was a false positive. Even though he didn’t have any symptoms, they taught him to eat a low-fat diet to prevent heart disease, which he didn’t have. Our system is set up to still think one size fits all, especially for atherosclerosis. The belief is that the only thing you can do is cut fat out of your food. To me, that’s like using a phone with a cord when we have smartphones today. We can do things a lot easier and we’re not tethered to a cord for the phone anymore. Lifestyle is really the key you want to consider if you have family history or any of these other risk factors for atherosclerosis or arteriosclerosis.

If hypertension, type 2 diabetes, and metabolic syndrome puts folks at a higher risk profile for atherosclerosis, is there a way to mitigate this risk profile?

Absolutely. In my clinic, I reverse and treat hypertension, diabetes, and metabolic syndrome by using a keto diet or low-carb keto diet. It’s a simple approach. I have a list of foods on one sheet of paper to follow and through that I can reverse and cure these problems – cure meaning you don’t have any residual problems. I use a potent lifestyle change, called “real food!” Other types of diets can do it as well and medications can be used to help people lose weight and to reverse all of these conditions, but my method doesn’t have that much risk and cost up front. Changing the food is so simple, yet so powerful.

That’s right. There’s a lot of confusion about this. Let’s use the metaphor of a car on a road with potholes. Say the road is your artery and you have a “pothole” – atherosclerotic damage. Knowing about the number of cars on the road – the lipoproteins and cholesterol going around this pothole – won’t tell you if there’s damage to the artery in the first place. Knowing your cholesterol level doesn’t tell you anything about the arterial wall and whether you have damage or not. The predictive models that doctors use today don’t drill down to the individual level.

How is atherosclerosis identified?

Atherosclerosis is damage to the arterial wall inside the artery. Taking a picture from the outside (or a test to measure the level of cholesterol in your blood) won’t tell you what’s going on. The only way to really know is to get a test that looks at the artery itself and is able to tell the difference between the inside and the outside of the artery. There are some tests that are non-invasive, meaning you don’t have to have a heart catheterization. A heart catheterization would be the gold standard of seeing whether you have narrowing in the artery. It is, however, costly, painful, and has a little bit of risk attached. Doctors only do it if they’re really thinking that you’re in a high risk category for atherosclerosis. It’s not typically done, unless you’re experiencing symptoms. You can also get an ultrasound test done, which is safe. You can get an ultrasound of the arteries in the neck and the aorta, but the technology is not good enough yet to investigate the arteries of the heart, although you can see how well the heart squeezes and whether it has a good pump function.

Another non-invasive test you can do is a coronary artery calcium score, which tells you if there’s any calcium, which is part of the healing process for these arteries. It’s like seeing if any potholes on the road have been filled. The calcium test, however, won’t tell you if you have the problem inside the artery or not, it just tells you that there is some calcium present. We’re really left in the dark in terms of figuring out that picture of the artery. Another very useful tool that doctors use is that treadmill test with a nuclear scan added onto it. They have you exercise on a treadmill while monitoring the heart rhythm and the heart EKG to see if there’s any possible lack of blood flow to the heart. That’s called a functional test, when you don’t know the exact artery composition or the blockage, but you’re doing a test to show that the function of the heart and the blood flow to the heart is enough to allow you to do whatever you want to do. These tests are the domain of family doctors, internal medicine doctors, and cardiologists – not all doctors can prescribe a treadmill test or a heart catheterization, but just about every doctor can prescribe the coronary artery calcium score. In our area, there are companies that come around and do ultrasound tests, because they’re non-invasive – there’s no radiation or x-rays involved; you can do it without a doctor’s order. A lot of people will get their own ultrasound tests to see if they have atherosclerosis or not.

Are there any symptoms one would have for atherosclerosis?

Yes. Symptoms usually occur at a late stage, though, not early on. A symptom from atherosclerosis comes from a lack of oxygen through the lack of blood flow. Our blood carries oxygen around the body and if there is a narrowing and there’s not enough to support that organ, that’s where you get the crushing chest pain of a heart attack. Most people say it’s a feeling of pressure or an elephant sitting on their stomach. Other common symptoms are jaw pain going down the left arm or a feeling of tightness in the chest. That’s if there’s not enough oxygen to the heart and the brain, which can cause a transient ischemic attack (TIA) or a stroke, which is just numbness and tingling in the arms or legs or difficulty talking. You might also be drooling. Those are pretty catastrophic events. It’s very frightening.

These are paths that you don’t want to go down. If the doctor is starting to talk about you having pre-diabetes, diabetes, high blood pressure, or metabolic syndrome, you want to get on top of it and make changes. Once you experience symptoms, doctors will do heroic things like putting in a stent like to open the artery or they might even do an artery bypass surgery, bringing veins to go around the arteries. These are very common to have done, but you want to avoid that if possible.

PrevPreviousThe problem with sugar alcohols
NextYour body can eat its own fat?!Next