Your body can eat its own fat?! – Adapt Your Life® Academy 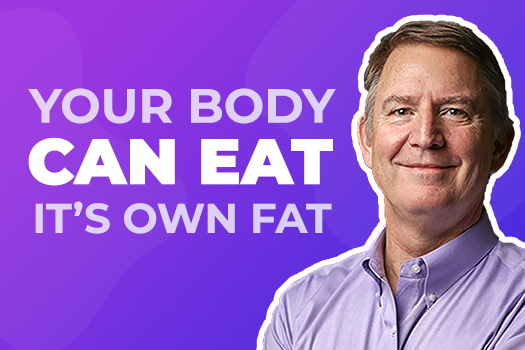 Your body can eat its own fat?!

Yes. It’s important to remember that our body fat really is just a storage place for our extra energy. You can tap into that and have lots of energy without eating anything. It’s not nutritionally complete to not eat anything, but if you have extra weight on your body – if you’re overweight or obese – then you have plenty of energy sitting there that you can tap into without actually eating foods or consuming drinks. It’s important to realize that. Just about everyone has extra fat. That’s how we’re built as humans. We store fat for energy.

I love watching reality TV shows like Naked and Afraid, where people survive with almost no food. The strategy that some people use is to come in with a lot of extra body fat and by the time the 60 days are up, you can see that they’ve lost a lot of that fat. Their bodies are actually living and feeding on their own fat.

If you’re not eating anything, you’re going to be burning your own fat. The interesting part is that they show the beginning and end pictures and weights over 20 days on those shows – most people lose 20 or 30 pounds! I’m not telling you to not eat anything, but what happens when you don’t eat anything is your body gets access to the fat stores you already have there. Doctors used to do that (tell people to fast), but they found that the body would start breaking down some of its own muscle to get some of the required nutrients it needs as well. When you look at the people on these shows, they’ve lost muscle; you can see the lack of strength. We don’t want to do that – it’s not the healthiest way to lose weight. What we do is provide protein. Eating protein while you’re not eating the carbohydrates on a keto diet is why you don’t lose the muscle mass or the muscle weight like on those TV shows. The main point is that, yes, you start burning body fat if you don’t eat anything. Our body’s default fuel to use is fat and ketones, not carbs. Ketones come from your body fat automatically when you start burning it – that’s why a keto diet is called a ketogenic diet; it’s because of the ketones generated by your own body fat.

The biggest myth surrounding the keto diet is that you need to eat copious amounts of fat in order to lose body fat.

Yes, that’s one of the most common mistakes. You don’t have to eat fats in order for your body to start using its own fat. That is one of the biggest distractions of “internet keto” that stops it from working for some people. A lot of people can follow the internet version and it works, but if the “over-the-counter” medicine is not working, consider a prescription-strength approach, like the kind of keto we teach. Oils, butters, and medium chain triglycerides (MCTs) are all fats that you don’t have to consume to do a keto diet. Your body will start burning its own fat and generating its own ketones just by eating proteins and the real foods that we recommend on a properly formulated ketogenic diet.

What does “fat adaptation” mean?

You burn what you eat or drink for fuel. If you eat and drink sugar and carbohydrates, you have to burn them. A carb eater is a carb burner, because you have to burn what you eat. If you stop eating carbohydrates, your body’s going to start looking around for energy and it’s going to shift to the fat you already have on your “on-board pantry” (your stored body fat). Changing from carb eating and carb burning to not eating carbs and burning fat instead is what fat adaptation or keto adaptation is about. On the internet it’s called “keto flu,” but it’s not really the flu. Very rarely does this adaptation give you bad symptoms. Most people don’t even get “keto flu.” When we went around the country with Adapt events on Saturdays, we would have three to four hundred people in a room and I would ask how many of them got the keto flu. I estimated about a third of the people said that they actually had some sort of side effects as they got started. It’s enough to know about it and realize it’s going to pass within a day. To summarize, keto adaptation or fat adaptation is changing from carb eating and carb burning to fat burning.

What happens to people who are not fat adapted and limit their fat, but remain on a high-carb diet?

A high-carb diet can work okay if you’re really careful about how much you have, but most people don’t limit the amount they have on a high-carb diet, which raises the blood glucose. Raising the blood glucose raises the insulin in the blood, and high insulin in the blood turns off the fat burning. It’s almost like you have a control switch: you’re going to either burn carbs or burn fat. If you eat carbs, it turns off the fat burning, so you’re not going to be doing well in terms of weight loss or getting into ketosis.

So, if you want to be a “fat burning machine,” the trick is to stop eating sugars and carbs?

Yes, that’s really the essence of it. When insulin is low, it unlocks your body fat store. Then of course, you want to have good nutrition, which on a well-formulated program means real foods that give you proteins, fats, minerals, and vitamins. It’s really not all that difficult once you get the bottom line, which is keeping the carbs low.