The problem with sugar alcohols – Adapt Your Life® Academy 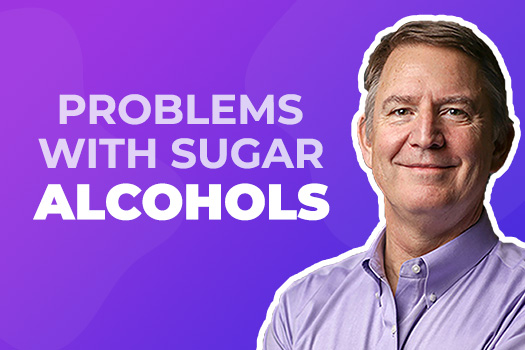 The problem with sugar alcohols

Many people are unaware that while sugar alcohols – like erythritol, sorbitol, maltitol, xylitol, and a few others – don’t count as sugar, they still do count in terms of carbs. Why do they count and how much do they count?

In the big picture, what these are used for is to get people away from sugar, itself. They give you the sweet taste without the metabolic effects of sugar (such as raising blood glucose and insulin). That’s what we’re trying to protect against, and so that’s why these have entered the market – people still want sweet things. We were raised with sweetness, but we’re trying to get people away from sugar. You’ll see these in products for diabetics like diabetic candy, which have sugar alcohols in them, but the problem when you’re trying to do a keto diet is that these sugar alcohols, and any artificial sweetener for that matter, can impact the metabolism. It’s not just the blood sugar or glucose rise that we think about; it’s also the effects on the ketones and on the fat burning itself.

Through the years, the amount of carbs for the sweetness you get is going down. There are new ones being made all the time. If you look at the products that have older sugar alcohols, they’re going to be higher in carbohydrates and if you look at the newer ones, they’re going to be lower in carbohydrates. That’s really what I focus on. I’m not so worried about the name and what it does. It’s more how many carbs are in there and how much of the product you are having. For example, if someone’s having one diabetic, sugar-free candy per day and they’re able to stick to that, that’s fine, because it might be 2 total carbs from the sugar alcohols. It’s not an all-or-nothing thing. It’s the amount of them that you have as well. Some people go to the extreme of fear-mongering, like, “Don’t have those, they’re going to kill you!” – but that’s not my experience. It’s trying to get you away from sugar, which is the bad guy raising the blood glucose and the insulin. I think there’s a role for sugar alcohols and you just want to be aware of the amount that you’re having.

To be clear, sugar alcohols still have some carbs in them and your experience is that it does affect some people.

Yes. It’s important to keep in mind that if I have a hundred people coming to me in the clinic, I need my method to work in ideally all one hundred people. So, I’m a little stricter when it comes to allowing for things or controlling things. If someone comes to me and they’re having small amounts of sugar alcohols and the program is working, that’s great! There’s a balance based on your individual metabolism for whether you can have those and still have it work for weight loss, diabetes control, or just general health.

That leads to the question that I get regarding the health benefits of these things. No one’s ever studied sugar alcohols to say, “Here are the health benefits.” What it does is just substitute for sugar. Ideally, over time, what happens is that you unwind out of the need for something sweet. This is pretty common, where people start at first wanting these other sweetened things, but then it fades away. That’s been interesting to see; I think people’s taste buds change. That brings me to the point that I don’t know that these things have any health benefits other than keeping you away from sugar. Whether it works for you or not depends on your metabolism and how much of them you’re having.

I recently learnt that sugar alcohols are all different on the glycemic index. Could you elaborate?

Yes, the newer ones are lower on the glycemic index. I think the food manufacturing companies are getting the idea that they want to make things lower in carbs so that there’s less metabolic impact. That’s a good thing. In general, the newer ones are going to look cleaner than the older ones.

So, your takeaway message for today is that it’s okay to have sugar alcohols, provided you count the total carbs … because they do contain carbs?

That’s it. And you want to find out if you can’t control them. If it’s a trigger for you, don’t have it! That’s a theme in any kind of lifestyle change: if there are foods you can’t control, then you want to limit them or eliminate them at first. It’s better to have something that doesn’t have sugar to sweeten it in the short run, but in the long run, I don’t know that you should have these. Again, they’re not studied for health benefits other than getting you off sugar.