Can I eat chocolate on keto? – Adapt Your Life® Academy 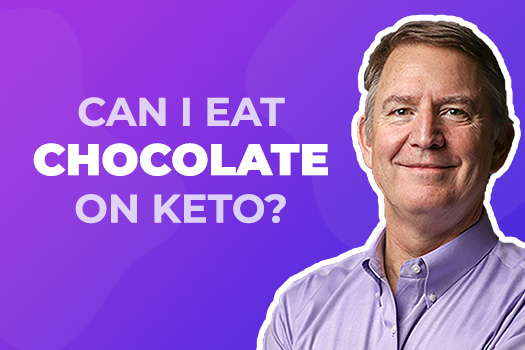 Can I eat chocolate on keto?

Most people think that if you’re on a keto diet, you’ve got to deprive yourself of everything you love. Can you help us understand the do’s and don’ts of having chocolate on a keto diet?

If you’re going to be having a chocolate that’s sweetened with sugar, you should have a lot less of that because of your daily total carb allowance. Perhaps you want to be smart about the chocolate you eat. These days many chocolates are sweetened with alternatives that don’t contain carbs.

If you want to do the “prescription-strength keto,” which is what we recommend, using total carbs (not net carbs), you’re still going to be aware of and counting those sugar alcohols and additives in the chocolate. So, yes, it’s best to choose a chocolate you like. I’ve had people come to me, proud that they’re using the internet keto version, which says that you need dark chocolate and I would ask, “Well, do you like it?” and they say, “No, it’s kind of bitter.” And I say, “Well, then don’t have that!” You don’t have to be limited to a certain type of chocolate. It’s all a matter of the number of grams of carbohydrates.

Practically speaking, in my area, I’m able to tell people about protein shakes that have a blend of chocolate with milk or cream to just get a taste of chocolate. You want to be careful of the new ‘Great for keto diet!’ ones that add in a whole bunch of oils and things. You want to keep the carbs low. If you look at the carbs in the little box (on a food label), a chocolate shake has about 7 carbs per shake – that’s total, not net. If you don’t drink the whole shake, it’s about 3.5 grams. People often drink the whole shake so that they feel like they’re having a meal, but that’s not the way I use it at all. I recommend people use the shakes just for the taste. If you have one little swig and put it back in the refrigerator, I calculated once that that’s about half a gram of carbohydrate. If you think of it this way, you can choose something you like.

Be careful at first, when you’re just getting started. If you can’t stop at just two squares of chocolate for the day and you eat the whole bar, then you’ll go way over your limit, which is why a lot of people will choose not to have it at all at first, or to get a more bitter chocolate, where you don’t feel compelled to have a whole bar of it every day. That’s the balance of using a program that really works: you have to be careful with trigger foods that you can’t control, and chocolate is one of them for a lot of people.

What I’ve been doing for 20 years now, and what I prefer, is little individually wrapped chocolate mints. I just have one or two. A lot of people can do that – they have a little chocolate every day and they have no feeling of deprivation on a keto diet. Other people have to be very careful about the chocolate, because they may eat the whole bar or the whole box. That’s where a one-size-fits-all approach doesn’t apply; some people can control chocolate intake on their own; others can’t. For any program that’s going to be sustainable and attractive though, you need to have a way to get chocolate!

You mentioned that when you’re using the total carb method, you can’t include polyols (sugar alcohols). There are lots of chocolates out there on the market, like our Adapt Keto Bar Minis, where we don’t use any polyols – only stevia. There are only 2 grams total carbs in the mini bar. What is your take on that?

Total carbs is what you want to follow. As you and I know, these mini bars have been tested in many people, including people who have type 1 diabetes. There really is no effect on raising the blood sugar, which is what you want. Counting total carbs will simplify things, because there are some polyols and sugar alcohols that aren’t quite as sweet, so you have a lot of grams of those. The newer ones, like erythritol, are stronger, so you need less of those. I think there are even going to be stronger sugar alcohols in the future, but you get the sweetness with fewer carbs.

Just look at the total carbs as the simplifying rule, and then you don’t have to worry about all the different brands out there. Make sure the total carbs are really low. With our keto mini bars, we’ve been fortunate to have groups of people try them and check their blood glucose afterwards. This is one reason why we’re so confident that this is a method that works, because we have people testing it over and over.

What is your take on artificial sweeteners in chocolates?

There’s an element that’s now come into the keto world where the food quality is not such a big issue if you’re trying to fix obesity or diabetes. You can have artificial sweeteners and still have this program work. If you’re more concerned about food quality and you want to have really “clean eating,” then I wouldn’t have that stuff. I would go to the bars that don’t use artificial sweeteners, but you don’t have to have those. I’ll have some people come to me and say, “It’s so expensive to buy all this special food,” and I’ll say, “Use a method that your financial means allow.” If you can’t afford those higher-priced, clean eating foods, this will still work for you. That’s again the balance: I need a program that works for everyone the first time, every time. If you want to do a more clean eating version of it, that’s fine.

It’s the same idea with grass-fed beef and things like that. You don’t have to have those things, but if you can afford it and you want to change the environment, it’s a fine thing to do. If I have someone coming to me who is only eating at fast food restaurants, this will still work, because we focus on the total carbs. This is just the flexibility you have when you use a method like this.

PrevPreviousWhat is your carb threshold?
NextWhat is keto cycling?Next