What is your carb threshold? – Adapt Your Life® Academy 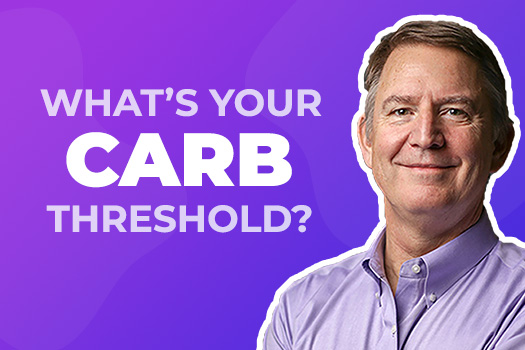 What is your carb threshold?

A carb threshold is such an interesting and contentious topic. So much so, that you’ve actually written and launched your new book dedicated to this very subject.

Yes, the confusion about carbs. The title we picked was End Your Carb Confusion, to help people understand what carbohydrates are and what they do in the body. It’s interesting to see – I’ve been in this keto, low-carb nutrition world for about 20 years now, which includes not keto and low-carb nutrition as well. As I’ve been seeing things progress, there seems to be a natural tendency to want to take a pendulum and go all the way to the other end, when in most things, the truth is somewhere in the middle. Not everyone can be at the wide extreme. We’ve gone from fat in the food being seen as bad for the last 50 years, since the 1970s, which is now fading away, and shifting to sugar and carbs in the food being seen as bad. Yet, you see people who eat carbohydrates and they’re healthy or at least they seem to be healthy. There are people all over the world who eat carbohydrates, so to think that you’re going to have a world where there’s no carbs and it’s just keto is almost magical thinking.

How do we put it all together, where some people can eat carbs and be healthy, and some people don’t eat carbs and they’re healthy? How do you figure out where you fit on this spectrum? It’s not an all-or-nothing. There’s actually a spectrum of carb intake, and in the big picture, we’ve shifted the discussion from how much fat you should have in the diet (which is fading in the research world) to how much sugar and starches you should have, or whether you should limit it at all. That’s really what we’re getting into – to try to help you figure out where you would be on this carbohydrate spectrum.

Can you outline the three different carb phases that you have defined in your book?

The lowest carb phase is the keto program that we’ve been using at Duke University now for over 20 years in research and in clinical care. We use the keto program, which is based on real food. Protein comes first and you run your body on fat. You’re not adding in oils like in the “internet keto” version you see everywhere. This is a therapeutic diet that we use to fix diabetes and fix obesity. If you have a severe metabolic problem like metabolic syndrome, high triglycerides, low HDL-cholesterol, we use that 20-gram keto phase. (20 total grams of carbohydrate per day.) It’s not 20 grams for everyone, but it’s around that. We’ve been using it in our clinic under medical supervision to help people to get off medications. If you don’t have any medical problems, it’s fine to do low-carb keto if you’re trying to just lose weight or fix heartburn, PCOS, or something like that. You might want to start at that keto level if you’re trying to fix one of these nagging problems that you’ve had that’s not dangerous in a medical sense, like heartburn (although doctors can prescribe medicines for that).

In End Your Carb Confusion, we have you take a survey to see if you fit into that first keto phase or the second or third one, which are higher in carbs. Not everyone needs to be on strict keto, which might be a surprise to those who are in the keto echo chamber. I’ve been one of the pioneers of the research on the keto diet for a long time, but I wanted to bring together the science that other people have done—David Luwig at Harvard, Christopher Gardner at Stanford—these are colleagues of mine in the medical nutrition research world. They’ve studied diets that are higher in carbs and will be healthy for people if you have the right metabolism. That’s the key – we help you figure out your phase of carbohydrate intake based on your metabolism and your lifestyle (metabolism and lifestyle generally go together). You might be at phase one (strict keto), or phase two or three— which are higher levels of carbohydrates—and be healthy, do what you want to do, and enjoy your life without worrying too much about food and nutrition.

You’ll notice that even in your own family there are different abilities to eat more carbs or eat differently. Part of it is genetics. Did you get the gene that makes you good at storing energy? There’s a classic joke where people say, “I look at food and I gain weight!” If you were dealt that gene, you can take in very small amounts and store that. You’ll know from when you’re very young if you have that. The story I’ll often hear is, “I was put on a diet by my mother and father when I was 10 years old.” If you had a weight problem and you were eating in a world that was filled with carbohydrates, you’ll declare yourself very quickly as one of the people who will store that energy really well.

If your own child is gaining weight at the age of eight or ten—more than would go away during the teenage growth spurt—your pediatrician can help you figure that out. You’ll notice that some children in your own family will gain weight naturally and some won’t. What tends to go together is the lifestyle side. If genetically you’re able to burn fat really easily, you tend to be more active, more energetic, and you can eat more carbs and burn fat really well. If you tend to store carbs really easily and you don’t burn fat well, you tend to not want to do exercise and you tend to plump up. I remember a classic line from Gary Taubes, a journalist who wrote a pioneering work called Good Calories, Bad Calories. He said there are different kinds of people, like there are different kinds of dogs. It’s not that extreme, but some dogs, like beagles, like to lie around and then go chase rabbits. If you put a basset hound on a treadmill, they don’t turn into natural runners, like greyhounds. There are different kinds of genetic tendencies that we have. Some people are natural exercisers. Just look at the people in the Olympics. They have a different body type and a different genetic predisposition. I could never be a gymnast, for example.

The environment goes hand-in-hand with this. If you were given the genetics of having the ability to store energy really well, but you weren’t in an environment full of sugar and starches, you wouldn’t gain the weight in the same way as if you were raised in an environment like in North Carolina, where they have these little cupcakes that children are given even every day now. There’s always a balance of genetics and environment; sometimes it’s all genetics, sometimes it’s all environment, or it’s a combination of the two. You really need to figure out what your genetic tendency is. The quiz we give helps figure that out. If you’ve developed obesity, for example, you’re 40 years old and you’ve lived in a carb-eating world (which is generally the case), you’re going to be put into a phase that’s lower in carbohydrates, because of your ability to store the carbohydrate as fat and not burn the fat so well.

How did you come up with the questions for the quiz?

From my clinical experience. The Duke Keto Medicine Clinic is very helpful for me, but it’s also from reading the literature and primary studies that other nutrition experts have done. Again, Harvard, Stanford, and Duke, where I am, we’re all pretty much on board with the idea that fat itself is not the bad guy in the diet.

The ability to talk about diet in terms of carbohydrates simplifies things so much, because there’s really only one factor. Simplicity is a theme that I’ve been trying to work on for 20 years now. I try to keep things simple, easy, and uncomplicated. Once you bring the discussion about nutrition around to carbohydrates, it makes things simple, because we can put you into a category and come up with a different phase based on the carbohydrates, based on my experience and the experience of other researchers. I wanted to come up with a book and a quiz for you to take to be able to make it simple. I wanted to make something that’s really effective and healthy for people and to get outside the keto echo chamber, because not everyone needs to do keto. I’m okay with that. I want you to be able to understand that the discussion should be about carbs today, not fat. That’s really what our focus is on.

Check out the full video about your carb threshold here.

PrevPreviousKeto and muscle cramps
NextCan I eat chocolate on keto?Next