What is keto cycling? – Adapt Your Life® Academy 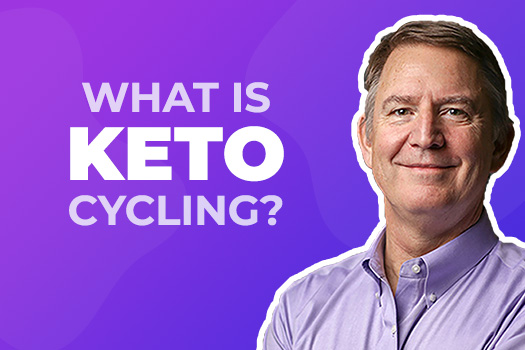 What is keto cycling?

What is keto cycling or cyclical keto?

The idea of cycling is to be burning fat and then burning sugar. It really hasn’t been studied as part of a treatment for diabetes or obesity, because it doesn’t make sense to do that. If you’re trying to really fix diabetes or lose a lot of weight, you want to stay fat burning. You don’t want to break the fat burning and go in and out of it. That’s something that’s changed over the years. 20 years ago when I started doing this, everyone thought fat burning was bad or something you’d only want to do for a few weeks and then go back to eating carbs. Now we know that fat burning is not bad. In fact, it’s healthy and healing for a lot of people. The idea of cycling in and out of fat burning is not really useful in a metabolic clinic like the one I have.

In many bodybuilding circles, people will go in and out of burning fat for fuel. For them, this may work, but as you’ve highlighted, for folks with metabolic-related illnesses, this might not be the best option for them.

That’s right. This is part of the internet confusion at the moment. If you search ‘keto,’ you’ll be bombarded with different approaches and different types of keto diets, including those diets that are used for children with epilepsy, called the ketogenic diet, and cyclic ketogenic diets for bodybuilders. Perhaps elite athletes might use this as an advanced technique for while they’re running or performing, but this confuses the issue of what do you do if you’re trying to fix a metabolic problem like diabetes, obesity, or hypertension.

We don’t really ask people to learn about ketogenic diets. We teach the keto diet where you eat real foods and you are consuming the fat on your body until it’s gone—not going in and out of the fat burning.

If somebody’s on a keto diet and they’ve restricted their carbohydrates to where their body is now producing ketones, the minute they eat glucose or sugar or carbs, their body immediately switches from burning fat for fuel to using glucose. The same cannot be said in reverse: if somebody wants to go back from burning sugar as their main fuel source to burning fat for fuel, it doesn’t happen as quickly. Can you comment on that?

Some people are very metabolically flexible. Children, for example, can go back and forth very easily. If a child is sick and hasn’t been eating for a day, they might even have ketones already, because they can burn fat so well. As we get older or have metabolic problems like diabetes, that ability to go back and forth takes much longer. A healthy person who doesn’t have diabetes might take three days to get back into full fat burning. We think that’s normal. I’ve been able to study some individuals for whom it took two weeks to get back into fat burning. These are people who in general have had a carb and weight problem all their life, who grow up heavy. People who have a long history of weight problems might take two weeks to get back into fat burning. I use that knowledge to explain that you have to be very strict. If you’re going to do a keto diet, you can’t do it one meal a day. You can’t do it six days a week. You have to do it every day, especially if you’ve had a long history of weight problems. I put that up front, because a lot of people don’t understand how strict you have to be and how difficult it can be to get into fat burning.

The good news is that after a day or two, once you start a keto diet, the hunger is gone and you’re basically in charge of what you eat, because you don’t have the hunger and the cravings anymore. That’s the secret of how a keto diet works for weight loss and fixing diabetes: you’re just not hungry.

Once you’re fat burning, we want you to stay there until your metabolic problem is gone. It’s an open question. It might even be healthier to maintain fat burning for the rest of your life. I know that sounds radical, but the new science over the last 10 years has become very positive. You want ketones around as anti-inflammatory molecules. The brain likes ketones and the heart likes ketones!

You’ve got a new book called End Your Carb Confusion, in which you describe three distinct phases of carbohydrate allowance. I want to make it very clear that this is not to be confused with cyclical keto. Could you speak into that?

Our research, going back 20 years now, has dealt with the keto diet where you go low enough on the carbs—under 20 grams total per day—so that just about everyone is in ketosis. Our research is in the book – phase 1 is 20 grams or fewer total carbs per day. If you want a therapeutic diet to get you into fat burning, phase 1 is the place to go. I’ve also studied other diets like low-glycemic diets and low-fat diets, so I’ve incorporated in the book the science from other people from Harvard, Stanford, and other places, which says that higher carbs can be healthy for some people. The low-glycemic diet roughly gets you into phase 2 in the book.

I wanted to explain the facts—that some people can eat lots of carbs and be healthy. This has to do with your metabolism that you were genetically given. For example, I know people who are very active and can eat more carbs and still be healthy. That’s where we have phase 3 (up to 150 grams of total carbs per day). Of course, we recommend healthy foods, not a lot of processed foods with sugar and processed flour and starches. We want the food to be as clean and as healthy as possible, so we don’t advocate going back and forth into different phases for cycling. We think that there are different types of metabolic flexibilities in different people and we give you a guide to figure out where you should start—whether you need to be at the very low level of carbs, or at the middle level or higher levels. That’s all in End Your Carb Confusion.