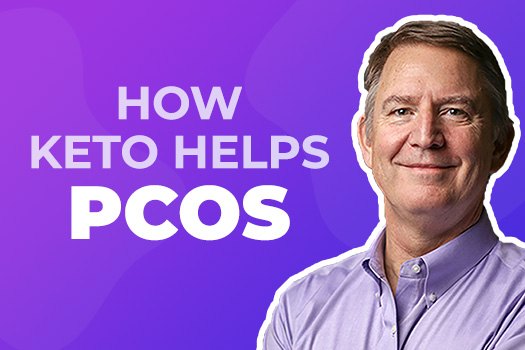 What is PCOS (polycystic ovarian syndrome)?

It’s a disease or condition that affects women, who will then often have trouble getting pregnant. It usually comes to medical attention when a couple is going to a fertility clinic to try and get help having a baby, although that’s at the late stage when someone finally figures it out.

There are other things that can make you think that you or your loved one might have it. PCOS (or polycystic ovarian syndrome) is usually accompanied by excessive hair growth for women on the face or other parts of the body. The reason for the extra hair growth is that more testosterone is produced in this condition.

It’s a problem with the ovaries. Most people with the condition will have cysts in the ovaries, which are actually the eggs that aren’t released. Polycystic means ‘many cysts’ and ovarian syndrome means ‘in the ovaries’ – so, many cysts in the ovaries. But that doesn’t happen for everyone, so the name doesn’t really correctly describe everyone who has it. If you have an ultrasound of the ovaries, which is non-invasive—ultrasounds are done all the time in obstetrics and gynecology—and it shows these ovaries that have a cyst in them—you can actually see them—but not everyone has the cysts. It’s a problem of the ovaries producing too much of the male hormone, testosterone. Thus, the menstrual cycles don’t work correctly and you get more of the male characteristics, like extra hair on the body.

I’ve heard that, if left untreated, PCOS can lead to type 2 diabetes, high blood pressure, and problems relating to the cardiovascular system. Is this true?

Accompanying PCOS usually is extra weight – not always, but usually these women are overweight or obese. Insulin resistance happens in the body, which is the precursor for pre-diabetes, diabetes, and heart disease. PCOS has a predisposition towards all of those problems too.

There’s no medication cure, but actually, you can reverse PCOS by means of a lifestyle change. The keto lifestyle is an especially good one, because excess carbohydrate intake (and the resulting chronically elevated insulin) is part of the problem for the ovaries to actually start producing more testosterone. When you reduce carbohydrates in the food (by whatever means, including the keto lifestyle), it actually can improve. So it’s true that there’s no medication that can cure it, but don’t be confused. There are a lot of lifestyle treatments that are very effective, even stronger than medications.

How many people with polycystic ovarian syndrome have you helped reverse the condition?

My clinic is an internal medicine and obesity medicine clinic. I focus on using lifestyle. The keto lifestyle is what I like to start with with just about everyone. To answer your question, I would say possibly two dozen over the years. My practice has a wide variety of people—the average age in my practice is about 60 years old—so because PCOS affects young women, that’s not the average kind of practice that I have. There are other doctors who are OB-GYN specialists who use keto and low-carb diets and they have probably seen many more people with the condition than I have. The whole idea of reducing carbohydrates, which reduces the insulin, which in turn reduces the effect on the ovary, is all on the same pathway of how you fix PCOS. It’s by reducing the insulin levels.

There are some medications that can be used for it, like metformin, but it’s not all that powerful. It’s more powerful to change the food and change the lifestyle and do a keto lifestyle if that’s what suits you.

If someone with PCOS followed your method, how long might it take to reverse the condition?

A lot of the symptoms will get better very quickly. The change in hair characteristics and hair growth happens pretty fast—in a matter of weeks. In fact, fertility can come back, too, so that if someone has had difficulty getting pregnant and they’ve gone to fertility specialists, when they come to see me, I have to warn them that they might get pregnant very quickly—possibly even within the first month or two. The menstrual cycles can come back that quickly and the ovaries can start releasing eggs again. If that was the cause of the fertility problem, that can happen very fast. Most young women who come to me do want to conceive, so it’s not a problem. But if you don’t want to get pregnant, then I warn couples that they have to start using contraception and be careful. Sometimes they’re not paying attention anymore, because they haven’t been able to get pregnant, so you have to be very careful again. If you don’t want to be pregnant, you have to start using contraception immediately when you change the diet, because the effects on the symptoms can be that fast. Weight loss occurs, too—one to two pounds per week, which is 4 to 8 pounds per month, or 50 to 100 per year, in someone who has that much to lose. Obesity may take longer to fix, but the symptoms of PCOS itself can get better almost overnight.

Are you allowed to share success stories of people conceiving naturally after coming to you with their PCOS?

It’s happened frequently. Usually people are very happy. I’ll get an email some weeks later saying, ‘Doc, I’m pregnant; thank you so much!’

We went around the country with Adapt keto events and I recall testing out the audience by saying, ‘I got one of my patients pregnant this week!’ and there was a hush in the audience and I said, ‘No, no, it’s not what you think! It’s because their PCOS got better and they were able to conceive!’ There’s usually some joking about it, because I don’t have an OB-GYN practice, so my patients don’t normally get pregnant, let alone me influencing that part of their life.

What other kind of test can someone do to determine if they actually have PCOS?

The first thing you want to do is to talk to a doctor about it, because it’s a syndrome, so there isn’t one specific test. There’s not a blood test that says you have PCOS. It’s the symptoms of hair growth, irregular menstrual cycles, and insulin resistance that will give you signs. (Many women with PCOS will also have oily skin and acne.) Perhaps you will find it with an ultrasound, but it doesn’t necessarily have to be through that. You could figure it out on your own and then just start the lifestyle change or consult your doctor for blood tests that look for insulin resistance. Either way is okay.