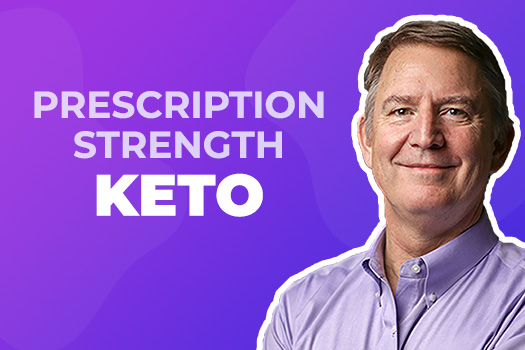 What is “prescription strength keto”?

Like any prescription strength thing, prescription strength keto is stronger than other versions of it – stronger than ‘over-the-counter’. Today, with the internet explosion of information about keto, I see people in my practice, as an obesity and an internal medicine doctor, and I use a keto diet. A lot of people learn keto in a way that doesn’t work. I want to use an approach that really does work, because people actually come to me and then they’re upset if it doesn’t work for them.

What chronic conditions can be treated using the Adapt brand of keto or the prescription strength keto?

Even before we get to the treatment that I can give people to reverse conditions, using the idea that sugar and carbs are the unhealthy foods, you can actually prevent most of these chronic medical conditions from occurring in the first place.

Let me let me get to the treatments we can fix. For the last five decades, the low-carb diet has been known as a treatment for obesity. Other doctors knew it was good for diabetes, too, but the studies we now have are convincing other people and getting more traction in the medical world that we can actually fix or reverse type 2 diabetes and obesity at the same time, which is something other programs generally can’t do. Obesity contributes to type 2 diabetes, so if you really want to reverse type 2 diabetes, you have to tackle both (obesity and type 2 diabetes). Those are the main ones that people have who are coming to my office.

Hypertension is very common, we can fix that as well. Less commonly, but quite problematic for a lot of people is fatty liver, which goes away. PCOS (polycystic ovarian syndrome)—a cause of infertility in women—goes away. Heartburn goes away, although most people don’t think of that as a medical issue, but doctors prescribe drugs for that all the time. We can reverse all these kinds of problems. Then, I need to take people off those medications. That’s another reason why we call it “prescription strength”—it’s as strong as these other prescription strength medications. (Except it’s just a diet!)

That’s right, taking people off medication. It’s a new term, de-prescribing, which is not just prescribing, but taking away medicine safely. It’s important to remember that if you’re on diabetes and high blood pressure medicine, to please do this with a practitioner who understands this to help you get off the medicine safely. Sometimes I need to reduce insulin on the first day when someone changes their diet. If you don’t reduce your medication, you can have unsafely low blood sugars and have hypoglycemic events. So, be sure you’re doing this with a doctor if you’re on diabetes or high blood pressure medicine.

What sort of success do you see in your clinic when you use your prescription strength keto?

Ever since I’ve been using prescription strength and explaining to people that if you do this it will work, it takes away the question in people’s minds regarding whether this works or not. The studies have been done over and over, so I have the confidence of prescribing this ‘drug’, a prescription strength diet.

But, if you don’t do it every day, it’s not going to work. If you do, what will happen is we can reverse your diabetes, high blood pressure, all these different things, so the success is almost 100% in the people who do it properly. I don’t have perfect success getting everyone to actually do it. That has to do with habit, sugar addiction, foods that people love and they think they can’t live without them. There’s an art of explaining that this will work. I will help you do it, but when you’re not doing this every day, it’s not going to work.

In studies where you put people in a hospital or a research ward and they’re following it, because they know you’re watching them, it works 100%. I’m aiming for that in my clinical practice but it’s not always possible, because not everyone can follow it every day. They need support – we have groups to help, both face-to-face and through Facebook and social media. At first a lot of people need that hand-holding and guidance to get over the sugar addiction and get introduced to new foods.

When you think about it, it’s an interesting concept that you can actually fix medical problems by just changing the food. We just don’t have that kind of understanding growing up in the U.S.. Maybe in other parts of the world it’s different, but here, doctors never really said, “We can fix these problems or give you medicine, but if you fix the diet we won’t have to give you medicine.” People aren’t typically given that option here. If you don’t want to go down that path of eating carbs and taking medicine, which doesn’t fix the diabetes or obesity, but rather just delays the problems, then come over and try some prescription strength lifestyle approaches, like prescription strength keto.

I use a method that uses lots of other people’s methods. I’ve learned through the years from lots of different doctors and dietitians who’ve used these approaches. The main message is that this will work. It’s as simple as following a list of foods.

The real food basis is very important. I don’t want people adding in oils and exogenous ketones and putting butter in coffee and things like that. When you’re trying to lose fat off your body, you don’t want to be adding copious amounts of fats and hitting “fat macros” and all that. That’s all just a big distraction. What we use has been studied. It actually came from clinical practice and then we studied it at Duke University starting 20 years ago, publishing the results of this method in peer-reviewed journals through time, and now those studies have been replicated all over the world.

Can you briefly touch on your online class – the ‘Keto Made Simple Masterclass’?

I’ve been able to break down the different stages of how you learn about a keto diet, how you implement it, in many different ways. Overcoming the fear or reluctance of doing it is really important. We’ve put together a masterclass that even addresses if you’re not sure if it’s right for you or whether it’s safe or not. (There’s a lot of unfounded fear about that.) We’ve really tried to break down the different barriers to people starting it and trying it.

For the education part, we just keep it really simple and then we anticipate the problems that people encounter over time. For example, we have to prepare you for when your family comes for the reunion and tells you that you’re harming yourself by not eating carbs. We have a class that teaches you how to do it, that prepares you to live in a world today where not everyone’s on board with it. Connecting to a community of people who are doing it with you is so important, which the class also offers. You’ll be connected to people who are down the road from where you are.

PrevPreviousAre you on medication for T2D?
NextHow Keto helps PCOSNext