What is NAFLD? – Adapt Your Life® Academy 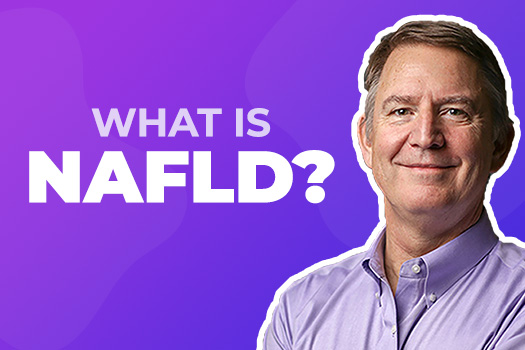 The underlying process that’s going on – meaning fat in the liver – used to only be seen in people who had chronic alcoholism. It still exists where someone is so addicted to alcohol that they don’t even eat food and they don’t have the wherewithal to get proper nutrition, so it’s more complicated than just drinking alcohol. There are other things going on. You would only ever see fatty liver in those who had chronic alcoholism up until recently. That’s why the term “non-alcoholic fatty liver disease” came in, to distinguish it from the alcoholic fatty liver. You don’t want to have a doctor or a health provider automatically assuming that there’s alcoholism going on; you don’t want to stereotype someone.

If you think about chronic alcoholism and what happens, fatty liver can turn to cirrhosis. Alcoholic fatty liver leading to cirrhosis used to only be seen in people who couldn’t control drinking and then didn’t eat as well. Alcoholism leading to cirrhosis means that your liver doesn’t function, so you can develop jaundice, which is a yellowing of the eyes. You can develop a belly that looks like you’re pregnant, but it’s not a baby, it’s fluid (called ascites). Then, bleeding problems happen with chronic alcoholism. I took care of many patients like this in training. That’s not a path you want to go down, one of fatty liver and cirrhosis and liver failure. Non-alcoholic means that it’s being seen now in people who don’t have alcoholism.

What is causing this?

It’s fat inside the liver. When you do an ultrasound or a CAT scan, the liver itself looks entirely different; there’s fat accumulation throughout the entire liver.

When I first got into this, I thought fatty liver sounded familiar. What I was thinking of was foie gras. Foie gras is a French delicacy, and it means fatty liver. (That’s the translation of foie gras – it means fatty liver.) The way you get fatty liver is by force-feeding geese carbs! Sugar and starch. I had this ‘aha!’ moment where I realized that it’s not the fat in food that causes fatty liver. (Remember, an alcoholic isn’t really eating anything other than drinking alcohol.) It turns out that it’s the carbohydrates! Geese that are overfed corn develop fatty liver. There are a lot of areas where fatty liver has been created on purpose like that, for food delicacies. I’m afraid it’s the same process that happens in humans. It’s the sugar and the starches and the food that create the fatty liver.

How would somebody know that they have non-alcoholic fatty liver disease?

It’s usually noticed in a routine blood test where a liver blood test is elevated. These are lab tests called the AST or the ALT. You might go to the doctor and they do an annual or periodic blood test and they’ll tell you if your liver test is high that you probably have fatty liver. That’s an assumption, but it’s a likely assumption if you’re overweight or obese or have diabetes – that’s the most common reason for it. A better way to verify that you have it is some sort of imaging test, like an ultrasound or a CAT scan. A CAT scan has radiation, so an ultrasound is probably the safest way to verify whether you have it or not.

Occasionally, that blood test elevation is not fatty liver. That’s an assumption that the doctor makes. I would recommend that especially if you’ve had that blood test abnormality for a while, that you get the ultrasound to make sure there isn’t something else going on. So, usually it’s a blood test that brings it to a doctor’s attention, because there are really no symptoms. There are no symptoms. It’s a silent process until very late in the disease.

The good news is that this condition can be reversed, correct?

Absolutely. I’ve known for a long time that it’s carbs—sugars, and starches—that cause it. The reason for that is pretty simple. If you over-consume sugar and starch, your body has to store it. (You either have to burn it or you store it.) But we don’t store sugar; we store fat, so extra sugar is turned into fat in the fat cells and in the liver. The liver can do it really well. It converts the excess sugar and starch into fat, and then sends it out to the fat cells for storage. The simple answer to reversing the condition is to cut the carbs or do a keto diet or some sort of other diet that cuts out simple sugars and refined flour. Our paper on this was published over 10 years ago, using liver biopsies (using a needle and taking a sample of the liver) to show that the fatty liver could be fixed by a low-carb keto diet. It’s not that other kinds of programs can’t do it too, but this one is particularly effective.

You don’t want fatty liver. I work at an academic institution where we can actually do liver transplants. I had to talk to someone who had already had a liver transplant, who was getting fatty liver again in the transplanted liver! The transplant was because of fatty liver (non-alcoholic) and I had to instruct this person that actually, it was the sugars and the starches causing the fatty liver in the first place. To save the transplanted liver, we have to do something for the lifestyle. Cutting the carbs down in order to save the transplanted liver… that’s kind of crazy—even doctors are not aware. Even gastroenterologists at academic institutions like mine don’t understand that it’s not the fat in the food that causes the fatty liver, it’s the carbs, the sugars, and starches. You have to know a little bit about metabolism, a little bit about nutrition, in order to make that connection. Then it’s obvious.

Is the condition partial to men or women or does it not distinguish between the two?

It doesn’t distinguish between them. It can affect both.

What success rate do you have in your clinic with this condition?

If you follow the program, it’s a hundred percent. No program has a hundred percent of people who can follow it, but we do everything we can to help people follow it. If you’re motivated to fix something like a fatty liver that you don’t want to get cirrhosis from, that’s a good motivator to be able to follow a program like this (a keto diet). The success rate is very high, because you’re actually treating the root cause of the fatty liver by lowering the carbs in the food.

Can someone have an absolutely normal liver if they go on your program?

Yes. What’s remarkable is that even early fibrosis—which is thought not to be reversible—can be reversed. We saw that in our liver study with liver biopsies. Fibrosis is thought generally not to be reversible, but the liver is a remarkable organ that can actually remodel and change itself, so there’s hope. Fatty liver is a cinch. If the fatty liver has progressed more towards cirrhosis and if it’s irreversible, then no, I couldn’t help fix the changes that are irreversible.

For a normal fatty liver, how long will this take to reverse if somebody goes on your program?

It’s actually very quick. The triglycerides in the blood are a reflection of the fat in the liver and the triglycerides can go down in a matter of a few weeks. The fatty liver can change remarkably in just six to eight weeks. My colleagues know this, but they want to know the mechanism of why it occurs. It’s sad. They’re more interested in figuring out why that happens rather than how to fix it. It makes sense when you think of it that way; they want to have a big research program to fix the mechanism when I can fix it by changing the lifestyle.