How Many Carbs Are Right For Me? | Adapt Your Life Academy 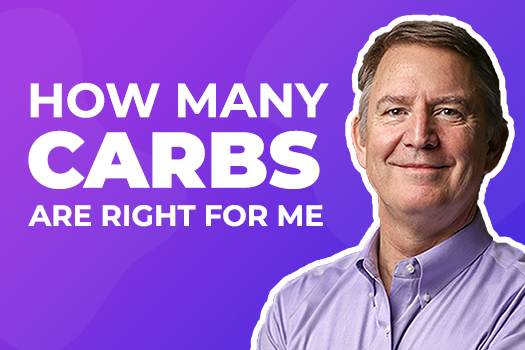 How Many Carbs Are Right For Me?

Eric, your new book is titled End Your Carb Confusion. I thought it would be great to chat about an important section within the book. That is, finding out how many carbs are right for a particular person. You typically prescribe your 20 grams of total carbs per day, but it is possible that someone could tolerate more than that, right?

Right. After 20 years of doing research in the low-carb and keto world, I’ve seen that people can be healthy without doing keto. I have a brother who’s healthy and never has done keto. He’s a big fruit eater. So, I wonder, how can I explain this well to myself, which I guess I’ve known for a while, but how do I explain this to other people? My strengths are in the clinic, with writing research papers. I brought on Amy Berger, who’s a professional writer and nutritionist who has the same kind of way of thinking that I do, so, it’s a readable book that explains why some people can eat more carbs than others. Yes, when you have diabetes and all these things, in the clinic I keep things really low, but now there are several studies where the carbs were 30 grams per day. This is the group out of Purdue University, Dr. Sarah Hallberg and the Virta company – they use 30. So, even the ‘written in stone’ 20 grams is not written in stone.

We want to write a book that gives our impression of what we’ve learned over the last 20 years to people who may not necessarily want to do keto or want to give up their fruit or bread (of course we’ll want to limit that – spoiler alert!). But not everyone has to be as strict as some people have to be.

In the book, there’s a section with a table that asks a series of questions to help you self-assess where you belong in terms of a daily carb count. You have broken this down into three distinct phases. How did you come up with this table and the questions to help determine the correct carb count for an individual person?

Well, for those of you who are scientific and know all about blood tests and all this, it has to do with insulin resistance and carbohydrate intolerance. Most people don’t know what that means and most doctors won’t test these things for you. So, we came up with the most common clinical manifestations of these problems – things like diabetes, PCOS, metabolic syndrome – these are all things you look at in the table, you count up the score of where you fit in and then it puts you into three rough categories based on the level of carbohydrate intolerance that you have, based on your symptoms – the way you feel, as opposed to some blood test measurement that is very difficult to get these days. And even then, these tests that are being done aren’t perfect in saying, “Oh you have this test, so you should have this many grams per day.” We’re not at that level of precision in our understanding.

We wanted to make this accessible to anyone, even those who think they can’t do a low-carb diet or keto because the range we have is quite big in terms of carbs. I think a lot of the people who’ve heard me speak about 20 grams, 30 grams a day will be surprised at how high the carbs go.

Let’s talk about those different phases. Phase one is your tried and tested method of 20 grams total carbs per day. This is the go-to method that you’ve been using to treat type 2 diabetes, metabolic syndrome, and obesity for over 20 years now. What is the range for phase two and who is this for?

After you take that quiz and look to see which category you’re in, we lay out the foods that you want to stick to. This is a very simple system where we tell you what you can have and how much of it you can have. It’s not like you have to go figure out things with an app or a computer. We wanted to make all of the information that you need available in the book. If you’re not fitting into the keto, having metabolic issues, things like that, you may be someone who only has maybe 30 pounds to lose, you didn’t grow up with a weight problem as a child, which means you didn’t have a carbohydrate problem as a child. There are a lot of people who are doing keto today who don’t really need it. They can do just fine with a range of, say, 50 carbs a day, making sure that it’s not sugar.

A big theme is that we’re advising people not to have a whole lot of refined sugar and starch, so that the carbs that you eat are the lower glycemic carbs. If you’re at 50 grams a day, you can have potatoes and sweet potatoes, just not a whole lot of them. So for the range in the first phase, keep it under 20 grams or so and then you can go up to 50 grams.

Now that I’ve helped people who are achieving their goals and they ask the question, “Can I add back carbs?”, and yeah, you might actually be up to 50 grams a day without the same metabolic consequences that you had before. So, we help people who are already into keto figure out where their ideal lifelong level should be.

So, to reiterate, once you have taken the quiz to see where you belong, if you have type 2 diabetes or metabolic syndrome, you would probably fit into phase 1 and then it wouldn’t be advisable to have more than 20 grams of total carbs per day. It’s important for folks to understand that you are sticking to your true, tried and tested method that you have honed over the last 20 years. Now that brings me to phase 3. I’m very active. I know that phase 3 is between 50 and 150 grams of carbs. That may seem like an enormous amount of carbs for most people, but for somebody like me, who doesn’t have metabolic syndrome or any other metabolic related illness, I train six to seven times a week, sometimes twice a day, we can have a range of between 50 and 150 grams of carbs per day.

Yes, and be healthy! And actually feel better by eating more carbs. So it depends on the metabolic flexibility. The insulin resistance side of things makes you less flexible. The younger you are, the more active you are, affects things. Even within a family or a spouse relationship, there can be big differences and we want you to understand why that is and that it’s not right or wrong. This is just the reality that some people have different metabolisms. Different lifestyle factors do matter in terms of how many carbs you can have and still be healthy. We approach this with an agnostic view on whether you should be meatatarian or vegetarian, it doesn’t matter, these are all just things that influence the blood glucose and insulin, which is really the bottom line. The consensus is shifting that fat is not the bad thing in the diet; it’s the sugar, the insulin, the downstream consequences of those things that are what lead to chronic medical problems.

It’s also important to note that while I might be at phase three now, it’s very possible that at some stage in my life I might not be able to be on phase three. I might have to go to phase two or even phase one. Things change and it’s important to understand that and to relook at that table and see where you are now.

Another thing is that within each phase, there’s a range. So, for example, phase two is 20 grams to 50 grams and phase three is 50 grams to 150 grams. It doesn’t mean that if I am in phase two I should be eating 50 grams of carbs per day, or if I am in phase three, eating 150 grams of carbs per day. There’s a sweet spot within that range. To find it, you start with your lowest amount and then you add back carbs very slowly to a point where you see that it’s affecting you. Once you see it’s affecting you, you understand that that is your carb count.

That comes from clinical reality. I’ve watched people do this in many different ways. Very few people in my world are watching and monitoring exactly every day. Can you imagine a hundred years ago someone knowing they’re having the exact same amount of calories or carbs every day? I think we have a system that’s flexible. The human body likes or has benefits from having a varied intake of food and energy. I guess this is a style point – that we want to keep things simple. You don’t have to be monitoring lots of things, unless there was a major study saying you had health benefits by sticking to, say, 31 grams per day. We just don’t have that kind of science available to say you have to be that strict or that accurate every day. The flexibility in the range comes from the clinical experience of lots of different doctors who’ve used this approach, not just me.

I just want to clarify that this is when you are talking about phase two and three. If somebody does have type 2 diabetes, metabolic syndrome, or obesity, you are pretty certain that 20 grams is the prescription strength recommended?

You have to think of this in terms of a dose of a drug. The lower you go on the carbs, the better the effect will be with diabetes. In a recent study using this approach in a medical setting, if you were at 100 grams of carbs a day it didn’t work that well. It worked for some, who came off medicines, but it didn’t work as well as going lower on the carbs. As you lower the carbs for diabetes, the stronger it becomes for the treatment of diabetes. For my patients, that’s what they want. They want to get rid of diabetes as fast as they can. “By the way, did you know you didn’t have to have diabetes?” is the first question I’ll ask. Most people have never been told that (this is type 2 diabetes of course). We can actually fix that type 2 diabetes.

One of the big reasons why you and Amy wrote this book was to ensure that there was an optimum diet or carb count that would ensure that everyone is able to live their healthiest life. There are many folks who don’t necessarily need to be on 20 grams per day. That’s the beauty of this book, that you’ve included everybody.

Right. The paradigm has shifted and there are several things you’ll notice if you do a critique of it. We don’t say fat is bad and we don’t say carbs are bad. We don’t have right and wrong based on shame and guilt. It’s all about explaining why you might have these problems and dealing with them and including the science behind it in a readable way. It’s actionable too, because at the end of reading this you’ll know where your carb level should be. We give you the foods that you need to stick to and you can create all the different types of recipes and dishes and cuisines, from inexpensive to very expensive, from going to high-end stores to the inexpensive stores – shopping on Amazon or Uber Eats, or even fast food places. That’s where the flexibility comes from. When you understand the most basic and fundamental principle, you have so much flexibility.

PrevPreviousWho Should Do Keto? Illnesses Keto May Help
NextKeto Made SimpleNext