Are you on medication for T2D? – Adapt Your Life® Academy 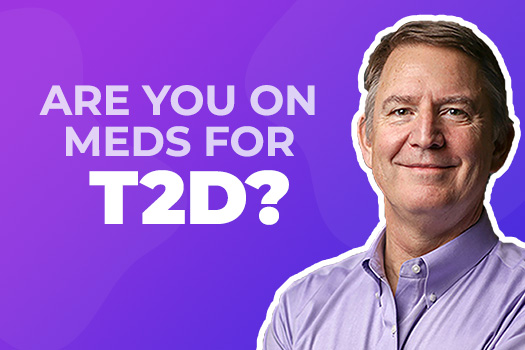 Are you on medication for T2D?

Once a doctor prescribes type 2 medications, will these fix the problem?

Actually, no! The language even in commercials for diabetes medicine tells you that this is the way to “manage” your type 2 diabetes, but it doesn’t fix it or reverse it. Most people with type 2 diabetes can actually reverse and fix it, they don’t have to be “managing it” with medications. But we teach our doctors, even at a place like a major university, how to manage diabetes with medications. If it was a great way to help someone live a long life and not have problems from diabetes, that’d be great, but the problem is that it doesn’t fix it; it manages it.

In general, you go from one pill to two pills, from pills to shots, and then from shots to higher dose insulin shots – it’s a never-ending pathway down the road of medication treatment of diabetes. You don’t have to go down that path. We’re trying to talk to people even before they’re getting medications for this. There’s another way to go about it, and that’s through lifestyle, including the keto lifestyle. Just consider that there are other ways to treat these conditions aside from medications. Most doctors have been taught the medication approach, not the lifestyle approach.

When these patients come and see you in your clinic, how many of them are already on medications for type 2 diabetes?

I was remarking on this last week, that there was someone who was 70 years old and was not on any medicine. That was so unusual, because in the U.S., if someone has been in medical care, by age 70 they’re typically on two to four medicines. This person had actually not eaten the typical American diet and was exercising and using lifestyle instead of medications. The tragedy is that once you start using pills and shots, most of these medicines actually compound the problem.

For most people with type 2 diabetes, obesity is one of the root causes and contributors. There is diet, but also there’s obesity. If you get put on a drug that makes you gain weight, this does not ever fix the diabetes. If you get put on a pill or a shot that—like insulin—causes weight gain, what the doctor is doing (and I don’t think they do this on purpose), is actually giving you diabetes forever, because they’re putting you on a medication that makes the obesity worse, and the obesity contributes to the diabetes. That’s the pathway once you get on a medicine. If the medicine causes weight gain and the doctor doesn’t address weight gain, you’re just going to be having diabetes forever.

When you talk to a doctor, they’ll tell you you’re going to have diabetes forever. But that’s partly because they’re putting you on pills and shots that do give you diabetes forever!

If I go see a doctor and the doctor recommends medications, what should I do about that?

With diabetes, it may start with pre-diabetes. Let’s say the doctor checks the blood sugar or the hemoglobin A1C (which is a marker of blood sugar over three months), and they say you’re going down the path of diabetes and they want to recommend a pill. The alternative is to ask the doctor if there’s something else you can change, like lifestyle. But be forewarned that most doctors are not trained in effective lifestyle treatments.

I’m wrestling with what’s happened to my profession. I went into this field to be a doctor, to help people cure things and prevent things, and now I just manage things. Not a lot of doctors come over to offering lifestyle treatment or obesity medicine treatment. As past president of the Obesity Medicine Association, there are a lot of doctors who wake up and learn a new method, including lifestyle. So, early on a doctor is saying you need a medicine, ask if there is something else you can do. If the doctor says no, just take a pause and do some research. There are effective things you can do besides taking medication.

I remember several of my patients finding me, personally, because they didn’t want to go on medication or insulin, so they were looking for doctors who thought there was another way. The keto approach has been validated now for 20 years. I’ve been using it for 15 years at Duke University in my clinic, so there are effective lifestyle treatments that can work, but the doctor may not be aware of them.

If someone comes to you and they’re on medications, what do you do or say to them?

I see people at all stages of this process, even people who are healthy and don’t have pre-diabetes. For prevention, this works great. If someone has pre-diabetes or is only on one medicine, that becomes pretty easy, because I just say, “Here’s the alternative approach and you can stop the medicine immediately.” Most people are shocked that I say you can stop that medicine immediately.

If you’re only on one pill for diabetes, it’s not a big deal. I would teach you how to cut out the sugars and starches and do what I like to call a “prescription-strength” keto diet, using real foods and not fake foods like keto products.

If someone is coming to me in a medical clinic, I’ll make sure they’ve had routine bloodwork done in the recent past and make sure that the thyroid level has been checked. I like to do three or four different thyroid tests, not just one. Then, I want to make sure that there’s no underlying complication before someone starts – again, this is the medical clinic view. For example, if someone has a heart failure, I need to be careful about certain things. If someone is on a blood thinner, that requires attention to leafy greens and vitamin K.

More and more people come to me when they’re already on pills and shots, and not just 100 units per milliliter strength, but 500 units per milliliter strength. Giving insulin to fix type 2 diabetes doesn’t work. It “manages it” and then the body just says, enough is enough, so you escalate the insulin. If someone comes to me and they’re on pills and insulin all at once, I want to make sure they understand what insulin does to the blood. It’s fascinating; some people don’t know, and then they’re given insulin to use and it’s like giving someone a motorcycle when you haven’t taught them how to ride it! I want to make sure they understand that insulin lowers blood sugar, and most of the dietary contribution to blood sugar comes from carbs. Your insulin is titrated to the carbs in the food, so when you cut the carbs out, which is what I teach people to do, you have to lower the insulin on the first day.

People come to me and they’re just shocked that I’ve taken people off insulin on the first day that they’ve changed their diet, because I don’t want them to have low blood sugar. Low blood sugar can make you pass out or faint or feel terrible, so you have to adjust the insulin on the first day when you use this keto program. This is one reason why dietitians shy away from it, because they’re not trained in it. I’m a physician, so I take charge of the diet and the medication all together.

It’s a process. If someone’s on diabetes medicine, they’re probably on high blood pressure medicine, too, so I monitor the blood pressure over time. It usually takes more than just a few days or weeks for the blood pressure to come down. It depends on how heavy the person is, how much insulin resistance there is. We call this process ‘de-prescribing.’ It is taking people off medications when they’ve changed their lifestyle and they no longer need the medicine.

I can understand that there are doctors who aren’t trained in this and they would think this is overwhelming to do, but it’s actually not that difficult. You just have to monitor these things and tell people, “Here’s the guardrails to stay within. Make sure you’re monitoring your blood sugar and blood pressure at home.” I’ve seen and helped people get off ten medications. Lifestyle is potent! The typical American diet is really harmful. It’s such a slow process of slowly increasing medicines, eating the same foods and being managed with medicine. The reward I get with de-prescribing is that people feel great. They come back and they thank me for helping them.

We’re training as many doctors as we can to do this, but many of them just don’t know how powerful it is. We have actually created a new organization called the Society of Metabolic Health Practitioners, with Doug Reynolds and his wife, Pam Devine, who started this organization to attract doctors (although every field is welcome to join this group), so that we can train as many people as we can and as fast as we can about the effect of lifestyle treatments, not medication management of these problems. You don’t have to “manage” types of diabetes, you can fix it.

If 100 people who have type 2 diabetes came to see you and they implemented the Adapt program (a keto diet), what sort of success rate could they expect?

The program is like a prescription. I’ve boiled it down to one sheet of paper (the Adapt food list). It will work like a prescription drug if you do it. It’s a hundred percent effective – if you do it. The problem is that people go home and their environment is not devoid of carbs. In the studies where people go into a hospital or metabolic research ward (and they’re monitored 24/7), it works a hundred percent, because they have total control of the food. In the residential treatment programs in Durham, North Carolina (Duke used to have one), it’s a hundred percent, because people are on the premises of the program and they’re following the food list, one hundred percent.

It’s not always one hundred percent effective for people who come to me, because people go home and they miss this and that kind of food. When a doctor like me tells you this will work, then that helps people know that they might have cravings for a couple days and they might miss certain things, but it’s like a prescription, and the doctor gives you the confidence that it’s going to work. That’s the confidence I have about this program, because we’ve studied it and put it to the test so many different times.

If a person currently has type 2 diabetes, they are on medication and you are not their doctor, what advice do you give them?

If someone comes to me, as a consulting physician, I take charge of the diabetes and high blood pressure medicine, because most doctors don’t know how fast these things can change. If someone’s on a chronic medicine for a psychiatric illness or a metabolic issue that I don’t see changing a whole lot, I let the other doctors take care of that. Sometimes I communicate with the other doctors directly. Most commonly, I just inform the patient, get them to understand what’s going on and they inform their doctors about it.

It’s really important not to change your medication yourself. Have a doctor who’s trained as a consulting doctor (like me), help you. Even the Virta Health Company will help you with doctors over the phone doing consulting at a distance. It’s not widespread around the U.S. yet or worldwide. I will take charge of the medicine in order to avoid it becoming too strong.

PrevPreviousWhat is visceral fat and why should you care?
NextPrescription strength ketoNext