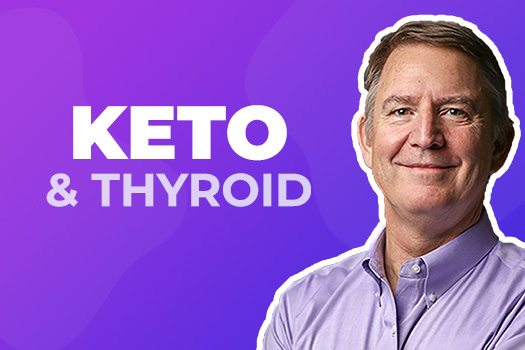 What is the primary function of the thyroid gland?

Of all of the different hormones that we have in our body, the one that’s most important for regulating metabolism (the metabolic rate or the “idle speed” of the body) is thyroid.

The thyroid, which is a gland that sits in the neck, actually secretes a hormone that will regulate pretty much all the cells in the body in terms of how much burning of energy there will be. So, you can imagine that if someone is low in thyroid hormone, like a low idle speed in a car, they’re not going to have much energy, not much get-up-and-go. On the other end of the spectrum, if you have a high thyroid, you might feel like your idle speed is really high, like you’re at a stop sign and your engine is still revving really high. That would be high thyroid hormone.

For weight loss, obesity, and diabetes, generally the more common problem that we see is a low thyroid. It means that you’re not burning much energy and so you might feel lethargic.

Does a keto or a low-carb diet affect the thyroid? What do you see in your clinic in terms of this?

When we evaluate someone at the beginning in a medical setting, your doctor may be checking these things. An obesity medicine doctor, like me, will always make sure that a thyroid level has been checked at the baseline. When people come to me, I have to say, it’s very rare for me to find a low thyroid level that another doctor hadn’t already found.

When you’re doing your checks in the clinic, do you check for T3, T4, and TSH?

Yes. Generally in the U.S., doctors have been taught that a thyroid stimulating hormone (TSH) test is enough. You have to understand the idea of screening in populations and that if you ask every doctor to do a test, sometimes you will miss cases. That’s what screening is for. You don’t necessarily have to have everyone to be caught in your net of screening; you want to just find as many people as you can. Most doctors don’t do a full thyroid panel.

The T4 and the T3 are two thyroid hormones which are just a little bit different based on the way the molecule is. The main thing to know is that it’s the T3 that’s the most active form of the thyroid hormone. I fall victim to this sometimes, where I quickly tick off the box of blood tests to check, the most common ones being the TSH and T4 now in our medical lab tests, without the T3. Doctors have been taught this idea that if T4 is okay (because we’re giving thyroid medicine in the form of T4) and the TSH is normal, then there’s not a problem, when really, the full panel is important. As a specialist, I don’t want to miss anyone, so I’m not screening anymore. I’m trying to make sure that you don’t have the problem. We’re not just trying to see if you’re at risk for it. So, if you go to an obesity medicine specialist, they’re going to check the TSH, the T4, and the T3.

It gets more complicated than that. If you’ve been on medication or you have symptoms and these levels are fine, then there are some antibodies that can be checked to see if your body has an autoimmune reaction against the thyroid hormone. This would explain why the thyroid hormone level is normal, but it doesn’t work properly. Your body is actually fighting it with antibodies. That’s a whole other level of testing that we can do.

In my understanding, it often takes a bit of time after starting thyroid treatment to normalize the ‘idle speed’ of the body. It requires constant checking and factors like exercise may play a role in how much medication to take.

The first step is the proper evaluation for thyroid and getting that right. Then, if you’re introducing a treatment, there are complicating factors. The traditional endocrinologists in the U.S. (the thyroid experts), almost insist upon using just one way of going about things. It’s a common thing where doctors and dietitians get into one issue and they just have that as the way to do it. If you’re on a medicine called Synthroid, a synthetic T4 (and remember, T4 is not the active T3, so it relies on your body to convert the T4 to T3), you want to make sure whether other medicines which have T3 and T4, might actually help better. If you have symptoms when you’re on just a synthetic T4, you might get better relief of symptoms on a what’s called desiccated or dried thyroid, a combination of T4 and T3.

The change after taking medication—if we use that metaphor of idle speed—is not like putting your accelerator down and then your idle speed goes up quickly. It’s more like turning an ocean liner on the ocean. It’s very slow—meaning a period of weeks—where you see the adjustment to the medication for thyroid. There is a slow response to a therapeutic change when you’re treating someone with thyroid.

It’s a complicated area that most doctors don’t deep-dive into. They look at a test on the lab panel and then they use one pill to treat you. If you still have a problem, they tell you they don’t know, it might be in your head or some other terrible thing like that to say.

If someone has low-T3 syndrome and their T3 level drops, what should they do?

You get primary, secondary, and tertiary problems. There are different hormonal levels involved, and so you’ll want to have a proper evaluation to make sure there isn’t some sort of brain abnormality that is the root cause of a low thyroid level. If that is all normal and you just have low T3, then that merits replacement, if you have symptoms. Depending on whether you convert T4 to T3 adequately in your body, you may respond to the Synthroid (synthetic T4) or you might do better with synthetic T3, or a combination of T4 and T3.

Part of the issue is that most doctors get trained in just one way and don’t know the nuances. There are some thyroid medications that are measured in milligrams, some in micrograms, and some according to the old “grain” measurement. You have to have conversion formulas. At first I didn’t want to take the time to learn all that, but of course I did, because thyroid is so important when you’re trying to help someone lose weight or fix diabetes. These endocrine problems tend to run together, so if you have diabetes, you’re more likely to have some other endocrine problem like low thyroid.

What role does thyroid play when it comes to body heat?

Metabolic rate, like the idle speed of a car, is what generates heat for your body. If your thyroid is low, you may be cold all the time. One of the major symptoms of low thyroid is what’s known as “cold intolerance.” This means you’re colder when other people are warmer. The classic sign is when you’re in bed at night, you think it’s cold and you have more blankets than your spouse does. Or, you go outside and you’re bundled up when everyone else is not. That’s one way you can gauge it. Then, of course, energy level being a metabolic and heat-related thing, you would have low energy, too.

Is keto safe for somebody without a thyroid?

Yes. You want to be sure that you’re optimizing the thyroid hormones with medication, if you’re taking medication for it. A lot of people with autoimmune types of thyroid problems, like Hashimoto’s disease, will respond favorably to removing carbohydrates from their diet. If you look at a standard thyroid diet for Hashimoto’s, there is a reduction of carbs. Maybe not to the level of keto, but they understand that carbs lead to inflammation, which can enhance autoimmune problems like that.

PrevPreviousWhy you should get an HbA1c test
NextApple cider vinegar and keto?Next