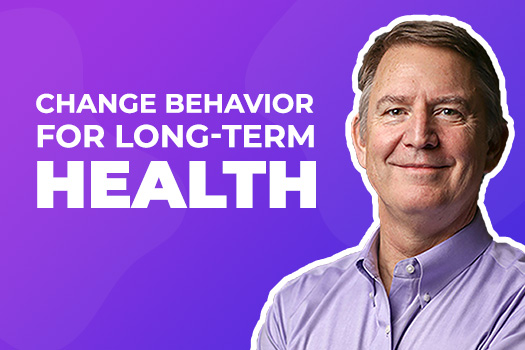 Can you tell us a little bit about the mental changes that need to be adopted ahead of time to set yourself up for success regarding long-term health?

When you’re starting a lifestyle change, especially one including food, there are a lot of things that come into play. There’s almost too much to talk about, because they’re all very personal, very individual. What we try to do is target the biggest factors for people. When you’re starting a simple and relatively uncomplicated keto diet like we teach, we start with a certain set of foods. The roadmap or the instruction for the behavioral change of what foods to eat is rather simple. That’s part of the strength of the program we use – the food I want you to stick to is all on one sheet of paper. There was that old saying that if you want to make something simple, boil it down to one side of an 8.5×11 inch sheet of paper. That’s basically what we have. You can see the whole plan and be sure about what foods to eat.

It’s “simple,” but it’s not always easy, because it’s usually the foods that you’re not eating – the behaviors you’ve had in place, often for many years or decades – that may thwart you from sticking to that food list. I understand that, but there’s a percentage of folks who just sail right through. All they need is the knowledge. They’ve been taught the low-fat diet and that behaviors like cutting the fat off would be the answer, but it wasn’t the answer for them. They think that it has to be difficult or hard or that they have to have hunger and so we make sure that people understand that. Maybe half of those who start and get the right information just sail right through. The biggest information and behavioral change has to do with the food that you purchase, the food you have in the house, and the food that you eat even in restaurants.

What role does psychology play in weight management?

It’s huge, no question. I would say just about everyone who comes to my office for weight or diabetes management or reversal say they emotionally eat. Then, there’s this curious phenomena where they think they’re the only ones who emotionally eat, when most of us do. Just about everyone eats to avoid feelings or to enhance feelings. Some cultures have perfected it to an art, like having an aperitif. In the French cuisine, there are very small portion sizes, but you have a first course and a second course and you have this and that, and then if you bring in alcohol, you heighten the mood and feelings and you manipulate it all by food and beverage.

We know that food is really important to manage or modulate emotions. Fortunately, for that percentage of people whom this just clicks with, it doesn’t really become an issue anymore. For some people, they still have that lingering need to emotionally eat, if the go-to coping tool has always been some sort of food or beverage. The good thing about a keto diet is that you can still eat food; you just can’t eat food with sugar in it. You can still emotionally eat other types of foods, which is kind of unique in terms of programs that help you lose weight. You can always eat something on a low-carb keto diet, although it can’t have carbs in it. The type of food again changes, but the urge to eat to cope will fade away for just about everyone, because it doesn’t provide that underlying sugar, which influences the dopamine in the brain and the serotonin for relaxation. Changing the behavior happens automatically over time, because you don’t get the same reward from the behavior. For example, when a child keeps saying, “Daddy, daddy, daddy!” and the dad doesn’t respond to the behavior, it is ‘extinguished’ or the behavior fades away, because the child isn’t getting the attention that they wanted. Back to food, if you eat to cope or to handle the emotions, but the food isn’t giving you that same reward, the behavior itself will fade away or “extinguish,” as it’s called in psychological terms.

What do you think about a sense of community? Is this vital for accountability purposes?

I think it’s really important. Again, there’s that percentage of folks who just sail right through after getting the information, but then there are those who really need the community for support, or they need the ability to talk to other people about what they’re going through. What’s amazing is the internet groups that we’ve created. There’s a self-supporting style of people who want to pay it forward and help other people. There’s a mentality of, “It took me so long to figure this out; I want to share what I know so other people don’t have to go through what I went through.” So, yes, community support is really helpful.

Most people come to my office thinking they’re the only ones that have this problem, that it’s not something you can publicly talk about without getting ashamed or embarrassed. We say that obesity or being heavy is the last place where people discriminate freely and bully, so we really are creating supportive environments in my office or on the social media sites. We carefully select people who are moderators and admins, so that they are totally on the supportive side. The main point is that you’re not alone. We all go through emotional eating or hunger at night, which is a big deal. I get lots of questions about still being hungry in the evening. That’s okay! Just stick to our plan and that will fade away, over time. The community and behavioral support is huge.

Many people find it difficult to deal with their friends and family when it comes to this new way of eating, because there is a lack of understanding about the diet. How should they communicate their needs during this time?

There are so many different situations and how you handle it, the style, the personality, the kind of person that you are. I’ll try to help someone come to grips with what’s going on. You can say “Thank you,” and accept the food someone is offering, but not eat much of it or any at all. That’s when you really don’t want to ruffle anyone’s feathers. What people often say is, “I was at the party and the host would be offended if I didn’t eat the food.” In that case, you might tank up on some food and eat ahead of time so you’re not that hungry and you come in and then you just eat a little bit of it and say, “Oh, it’s wonderful!” All people want is that if they put time and effort into preparing the meal that you do enjoy it. Tactfully say, “I’m just so full, it’s so wonderful,” and then change the subject.

I remember Dana Carpenter, who’s in the low-carb world and had some great cookbooks early on (this is going back fifteen, twenty years, like me, being in this that long) and she would come up with essays where she would tell you to just change the subject and if they keep perseverating about the food, they’re going to be the one who looks weird and the one who is being unreasonable. There’s a way to tactfully change the discussion. Other people go on the other far end of just saying, “No, I’m out; no thank you.” That’s a little more brash in a social setting, but at the end of the day nobody really cares if you eat all of their mashed potatoes when you just distract them onto something else. We help people deal with the idea that you don’t have to let others manipulate your feelings so that you feel bad that there’s food on the plate left over. All of these things that might seem small, can loom large, especially around the holidays. I’ll joke that it’s a good thing we have 11 months before the next holiday where we have to deal with this again.

This time of year, at the beginning of the new year after the holidays in the U.S., there are a lot of people who come back to the obesity medicine doctor’s office, the keto medicine office, who have gone through the carbs during the holidays and many of them were doing really well, they were really encouraged, and then they noticed that if they have a little taste of something it wasn’t as good as they thought it was going to be. There are a lot of changes that occur in their taste buds and things that are really sweet don’t really taste that good anymore. You can see that there are a lot of different ways to approach it. Avoidance – staying away, not having the food in the house, not having it in the places where you go for fast food, you just don’t have carbs around – no question, that can help. If you’re forced to have a family who does eat carbs, they haven’t bought into it yet, the best thing is to lead by example, but don’t force anyone to do it.

If you follow this, after a day the hunger and cravings are gone and you can actually live in a house full of carbs. That’s one of the things that is most amazing to people – that they can be around food that used to draw them in and after just a day or two, there’s this barrier that comes between you and the donut or the bread, for example. So, lead by example in a family that still eats carbs. With time, the family will start saying, “Wow, what you’re doing is working! How come you have so much willpower? You didn’t have any of that cake!” You can see there’s a whole range of approaches that can be used to handle that situation of being with friends or family and it really depends on your style, your comfort level, with these different approaches.

Absolutely. Goals help you realize that things are happening. It’s important though, to not just have weight loss being a goal, the end result. There are so many things that can change along the way, like hunger going away, feeling more energy, less heartburn, less joint pain and these are all small goals. Even then, it’s individualized, so we help you with personal challenges so that you can pick a goal that you want to achieve for this week. Then we support you in every way we can to achieve that goal. That might be a short-term goal of giving up artificial sweeteners for a week or giving up some other product you think might be giving you difficulty or a side-effect.

So, goal setting is really important but the type of goal really should be a close one that you can tick off. You have to find ways to satisfy yourself on the way and the end goal of weight loss or diabetes reversal will eventually happen. It’s important to feel good, that you’re achieving these things upfront and early on to keep you in it. Keto and low-carb eating is so effective that you get early results. That really helps you to sustain your behavioral change, because you see that things are changing.

PrevPreviousKeto and hormones
NextHow to get rid of skin tagsNext