Why you should get an HbA1c test – Adapt Your Life® Academy 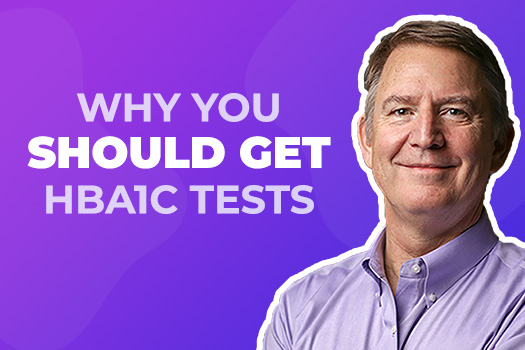 Why you should get an HbA1c test

What exactly is an HbA1c test?

HbA1c is the same thing as hemoglobin A1c, it’s the same term. It’s a test that your doctor can draw from the blood that represents the blood sugar level on average over the last three months or so. The important thing to know is that A1c is a marker of elevated blood glucose or pre-diabetes. Diabetes is a problem of elevated blood glucose and A1c could be a marker to say that you have diabetes. It’s often used by a doctor to screen for or even to monitor the treatment of diabetes in an individual. It’s a simple blood test to do.

A lot of people measure their blood glucose every time they eat something, but really, that doesn’t tell the whole story and it won’t indicate whether you have pre-diabetes or not. The HbA1c will be able to tell you if you have type 2 diabetes – is that right?

It depends on which guideline you look at in terms of how to define diabetes. They usually use a combination of the elevated blood sugar, but the simpler way—which doesn’t require someone at home to measure blood sugars or doing a clinic test—is to check hemoglobin A1c. The A1c will give you the marker of that blood sugar over the last 90 days or however long the red blood cells have lasted. The A1c itself will incorporate or include those blood sugars that go up after meals, so it’s an easier test to do. I don’t know if you remember from high school math that if you have a curve, you can analyze the area under the curve (called an integral). The A1c basically takes that area under the blood glucose curve without having to test it all those times during the day. It’s a summary measure that will tell you whether your blood sugars have been normal or a little high or very high over the prior three months.

I always thought that testing your blood sugar at home would just tell you which foods affect it the most. I didn’t know that you could actually tell if someone has pre-diabetes or type 2 diabetes by doing a number of instant blood glucose readings.

The reason for that is that the blood glucose is carefully regulated. The body doesn’t like it when the blood glucose is elevated. It’s designed to not let the blood glucose go very high. By the morning, after not eating overnight, it’s almost always going to be under 100 milligrams per deciliter. If it doesn’t return to that and it’s elevated in the morning once or twice, it’s a pretty reliable indicator that over the course of the day it has gone up higher and the regulatory system is starting to break down. That’s called insulin resistance, when insulin doesn’t work like it used to. Insulin is what lowers the blood glucose and keeps it down.

After a meal, the blood glucose can go up if you’re eating carbs, but then it should come back down into that normal zone. When that normal zone starts drifting up, that represents an underlying metabolic problem. It is a range that really should be tightly controlled. As it gets “out of whack,” so to speak, that represents an underlying pre-diabetes insulin resistance and you really don’t want to go down that path. So, the blood glucose is meaningful, but you need several tests to be sure that it’s mostly in the normal range, which is why most doctors just go to the A1c, because it’s a one-time test and it’s really reliable, too.

Could you speak to elevated blood sugar in the morning, or the “dawn phenomenon?”

The dawn phenomenon is an elevated blood glucose in the morning when you haven’t eaten anything. People will ask me why it happens, and it’s because your cortisol goes up in the early morning to get you prepared for the day. It’s that circadian rhythm or daily variation. Even on a keto diet, the blood glucose is a bit elevated – 110, or 120, not 160 or 180 milligrams per deciliter. That little bit of elevation is not anything to worry about if the rest of the day the blood glucose levels are lower.

That again brings us to the importance of the A1c, which shows that integral under the curve. If you’re just a little elevated in the morning, but the rest of the day you’re down in the normal range, your A1c is going to be normal. Don’t get too worried or nervous about something that really doesn’t matter that much (if your blood glucose is elevated only in the morning). Some of my patients are coming in with these continuous glucose monitors. They’re checking the blood glucose multiple times a day, so we have a lot of information without really knowing what to do with it.

If you come to this thinking your blood glucose needs to be normal all day long, that’s a tough bar to achieve. Even exercise can raise blood glucose, because you need it when you exercise. I reassure a lot of people who come to me concerned about that morning elevation of blood glucose from the dawn phenomenon that it’s okay.

Back to HbA1c, what is the number people should be looking out for when determining if they have pre-dibetes or type 2 diabetes?

The problem with a number and a cut point is that these are just arbitrary points that are made. What you want is the lower the better with A1c. We could say 6 means pre-diabetes, 6.5 is diabetes, but even the experts change the numbers over time, so they can “cure” a whole bunch of people by just changing the definition of diabetes by 0.5!

In general, the lower the better. You want to be in the 5% range if at all possible. If you’re in the 7-12% range, this is diabetes (severe diabetes if you’re over 10%). This may be what motivates you to take action to change your lifestyle. I’ve been working using low-carb keto diets for 20 years in research and in the clinic, and people come back to me saying, “Gosh, this is so easy. I wish I had known about it before!” If you’re thinking that this may be your call to action, try something that’s relatively simple and easy and effective, like the kind of program that we’ve been using at Duke University for 20 years in research and in the clinic.

The other message is that if the A1c is a little bit elevated, you don’t need to go on medication at first. Doctors are taught to just use medication, but an elevated A1c is just a wake-up call that you need to do something about your metabolism. Diet is a very potent part of lifestyle. We can do so much by changing that; we don’t need medications. In fact, I take medications away from people, because they don’t need them anymore after just changing their diet.

How do folks get their HbA1c tested? Are they able to just go and take the test or do they have to be referred by a doctor?

Most doctors, in the U.S. anyway, will order an A1c if you ask them. One of the issues with asking a doctor to do a test is if it’s not covered by insurance, you might get a bill for it and then the patient gets upset that the doctor ordered a test and they got charged for it. It depends on if you think insurance should cover all the test costs, then the doctor wants to be sure your insurance will cover it. A1c is generally covered as a screening tool for the general public. But if you don’t see a doctor regularly, in some states in the U.S., you can order it at a retail place on your own and get it. You have to pay for it on your own though.