What Illnesses can a Keto diet help? – Adapt Your Life Academy 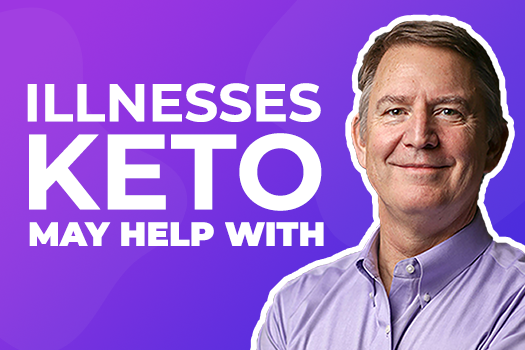 Who Should Do Keto? Illnesses Keto May Help

The aim of the ketogenic diet is for the body to turn to its own fat stores for energy, rather than burning excess carbohydrates. This is done by significantly lowering the consumption of carbohydrates and instead, focusing on healthy fats and proteins as the main sources of fuel for the body.

While the diet has gained massive popularity because of its incredible treatment of excess weight and obesity, keto has also shown potential in improving and even treating a host of other common health conditions. Let’s take a look at some of these.

Type 2 diabetes currently affects 34.2 million Americans (just over 1 in 10!) with 88 million American adults in the prediabetes phase, making it one of the most common diseases treated in the U.S.

Type 2 diabetes leaves the body unable to properly regulate and use glucose as fuel. This has ripple effects on the nervous, circulatory, and immune systems, causing early symptoms like fatigue, constant hunger, a dry mouth, itchy skin, unhealthy weight loss or gain, and frequent urination.

Because keto is so low in carbs, the diet helps to lower blood sugar levels and keep these more stable within a healthy range. Large spikes in blood sugar are minimized, reducing the overall need for insulin.

As mentioned above, keto has become largely popular for treating people who are obese or who carry a bit more weight than is optimal for a healthy body.

When following a keto diet, the body relies on its ‘on-board pantry’ for fuel – ultimately burning fat already in the body, rather than burning what is being added in the form of dietary carbohydrate.

Following a well-formulated keto diet can show weight loss results within just a few weeks! While further research is needed, keto has in many cases been shown to reduce hunger and sugar cravings, making the diet easier to follow compared to those focused on deliberately cutting calories.

Cardiovascular diseases, like high blood pressure and heart failure, may be improved with a keto diet.

The healthy fats in the diet have been shown to improve indicators of cardiovascular health, such as raising HDL-cholesterol, lowering triglycerides, decreasing the number of small, dense LDL particles, and reducing inflammation.

It is important, however, to base your diet on wholesome, nutrient-rich foods that are low in total carbs, rather than focusing on heavily processed, keto-branded junk food products.

Acne often has direct links to higher blood sugar levels, which can affect the levels of various hormones that play a role in skin health. By significantly lowering the intake of sugar and foods that get converted to sugar in the body (like starches and other complex carbohydrates), hormone balance may be restored. For this reason, keto shows promising possibilities of being used as a supplementary treatment for acne and other skin conditions affected by blood sugar.

Keto originated in the 1920s as a dietary therapy for epilepsy, in children who did not respond well to conventional treatment. It is still used today, a century later, to reduce seizures and other epileptic symptoms, especially in those battling to find medication that works for them. Keto is not effective for everyone with epilepsy, but many people do find that it can completely eliminate seizures or at least reduce the frequency and severity of them.

If you suffer from acid reflux (a.k.a. heartburn), you probably don’t have to give up your favorite spicy or acidic foods in order to feel better. Despite “conventional wisdom” putting the blame on things like coffee, chili peppers, and tomato sauce, the truth is, most people who adopt a keto diet find their heartburn totally disappears – sometimes within just a few days! So before you go cutting out some of your daily staples, consider cutting the carbs first.

Keto offers hope for those who suffer from many of the illnesses that plague millions of people worldwide. At Adapt Your Life, our mission is to help as many people as we can to take steps toward a healthy future.

Remember: please work with a healthcare professional before embarking on a major lifestyle change. If you are taking medication, be sure to get guidance from a medical professional before adjusting any of your medicines. If you are taking medication for diabetes (either type 2 or type 1) or high blood pressure, inform your doctor before you start a keto diet so that you will know how to proceed safely.

PrevPreviousProtein Intake on a Low-Carb Keto Diet
NextHow Many Carbs Are Right For Me?Next