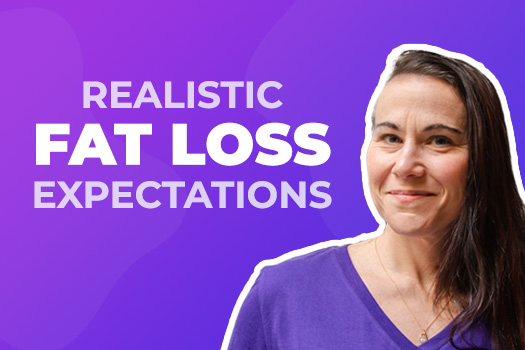 There are so many factors that come into play when it comes to fat loss, including hormones, age, gender, medications and more. How should people be setting realistic expectations for fat loss?

You could write an entire book about this topic! The first thing that people really need to understand is that fat loss is a long-term process. It’s not a one-and-done; it’s not like you do keto for one day and you lose 50 pounds. Think of it like an investment – if you have a retirement account or a savings account, you put in a little bit of money every month and while it’s only a little bit, over time, it compounds and adds and builds, so that after a few years, you have lots and lots of savings, hopefully! It’s the same thing with weight loss. It shouldn’t take years, but little actions every day and the weight comes off a little bit, a little bit – when you step back and look at the big picture, the weight is generally down. People have to understand that even on keto – so many people see these seemingly miraculous transformations – it takes time. If you go into the process understanding that it’s going to take time, you’ll be much less frustrated when you don’t lose 20 pounds in the first two weeks.

The difficulty comes in when learning to understand that we are all different. Typically you’ll find, let’s say a husband and wife, embarking on this journey together and one person loses that 20 pounds very quickly and the other person takes time. It’s so hard for the other person, but the fact is we are all different, yet we have these unrealistic expectations that everything needs to happen now.

I’ll share a joke with you – I wish I had created this, but it’s not mine: ‘Did you hear about the woman who went on a keto diet? Her husband lost 20 pounds!’

Men and women definitely lose weight at different rates. Men tend to lose much quicker and easier than women. Even when a man is not being as strict with his diet, he can still lose weight, whereas the woman has to pull out all the stops and press all the levers and even then, it can be slow. It’s human nature to want to compare ourselves, but we really are different; everyone has a different medical history or a dieting history. You have to keep your eyes on your own journey, on your own road. You can look to other people hopefully for motivation and inspiration, rather than comparing and getting discouraged and feeling jealous and frustrated.

With regards to setting realistic expectations for fat loss, what is the ideal timeframe that someone should expect?

There are a couple of points to be made here. I think Dr. Westman usually says that a pretty good rate of weight loss is one to two pounds per week, but here’s the thing people need to understand: the heavier you are and the larger you are when you start, the more weight you’re going to lose and the quicker you’ll lose it at first. In the first few weeks and months, it’s going to melt off of you. The closer you are to your goal, the more difficult and the slower those few pounds are going to come off, compared to someone who’s starting off much heavier. For somebody starting off much heavier, it is possible to lose 10 pounds in a week and 20 to 30 pounds in a month, if you are very, very large. It’s entirely possible to lose that much. You’re not going to lose that much if you’re only looking to lose 10 or 20 pounds, though.

The other factor that people have to be aware of is that scale weight doesn’t tell the full tale all the time. If you’re looking at the scale every day, it is absolutely critical that you get comfortable with the fact that your scale weight fluctuates from day to day by one or two or three pounds. Over the long term, your weight will be down, even if from day to day there’s been little blips where it was up or staying the same. Even if a good rate is one to two pounds per week (again, that depends on your starting size), that one to two pounds every week might not be steady every single week. It’ll be the average over three or four or six months. When you look back and see that you lost ‘x’ pounds over six months, that averages out to about one or two pounds a week, versus losing one or two pounds every single week – it doesn’t work that way.

Do you have advice for people trying to set realistic expectations? For example, not getting on the scale, especially at the beginning?

I think it’s okay to weigh yourself. It is okay to weigh yourself every day if you want – some people find that that helps keep them honest, so to speak. But, if you’re going to weigh yourself every day, it is imperative that you understand that those fluctuations are normal and it doesn’t mean you’re doing something wrong. It doesn’t even mean you’ve gained body fat. Your scale weight is made up of body fat, water, bone, muscle, which is why it fluctuates. If you’re up a pound or two, it’s probably not body fat. Women, for example, retain water in all kinds of different ways.

People have to remember, too, that even if your scale weight is not changing at all or changing much slower than you want it to, your size and shape can still be changing. We see this all the time in the courses that Adapt Your Life runs – people whose scale weight is not changing, yet they’re in smaller pants or they’re on a new notch on their belt – they’re getting smaller. Pay attention to other things that are happening in your body besides your scale weight.

We want to obviously give as much hope as we possibly can to folks who are currently battling to lose weight or are in a stall. Is there light at the end of the tunnel?

Yes! There’s always hope! Everybody can lose fat. You just might have to tinker a little. If what you’re doing now isn’t working, step back and assess what you can change, what you think might be getting in the way. It’s not always the food – check the medications you’re taking. Some medications either cause weight gain or make it more difficult to lose. Thyroid problems can definitely be an issue, too. Everything is fixable, but first you have to identify what needs to be fixed.

PrevPreviousWhat is a stall?
NextLow-fat vs Low-carb. And the winner is…Next