Low-fat vs Low-carb. The winner is... – Adapt Your Life® Academy 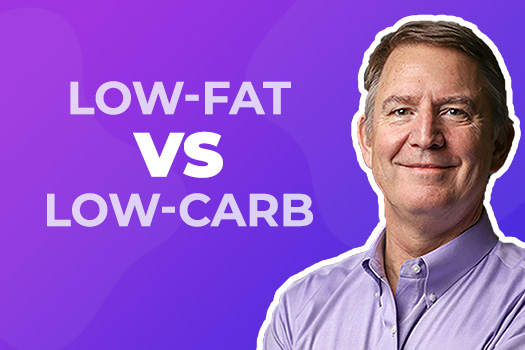 Low-fat vs Low-carb. And the winner is…

Low-fat diets were the go-to for folks with cardiovascular risk in the 1960s, but became the overarching ideology from the 1980s. Low-fat diets were promoted by governments, the food industry, and by health professionals. Do you remember this craze and were you an advocate of low-fat diets back then?

For the last five decades, everyone knew a low-fat diet was the ‘best diet’ or really the only diet. I went through medical school in the 1980s and came out of a U.S. internal medicine residency and I really didn’t get any training in nutrition. The only training I got was in what’s called ‘total parenteral nutrition’, where you take over nutrition for someone who’s seriously ill; you would often give it in the vein, sometimes using the GI tract.

Not knowing much about nutrition, I watched pop culture change and saw all of the low-fat foods that were talked about as being ‘heart healthy’ and I really didn’t know much. I was then introduced to the low-carb diet by two of my patients who lost weight in front of my eyes. This was a rare event at that time. I was an ambulatory care internal medicine doctor at the Veterans Affairs hospital in Durham, North Carolina. It was really when I saw these individuals have great success that I woke up to what’s going on. I asked myself, what is this low-fat thing? That’s where I started trying to find science. There wasn’t much, so we developed our own research around low-carb diets – this was all at the same time when low-fat was ruling; guidelines started saying low-fat will fix everything. I took training in evidence-based medicine or clinical research, that most doctors don’t get, so I had an ability to start reading papers. It wasn’t until the USDA food pyramid showed up in my children’s school books – this was the mid-2000s – where I started to say, wait a second, something’s wrong. By then I knew the low-fat diet that everyone had preached was not supported by solid science. I was in training and just not aware of all of the low-fat stuff going on at the time. Now, looking back, it’s shocking that so much was done with so little research or scientific evidence behind it.

When did you start advocating for a low-carb diet?

I was coming to this with a healthy skepticism. I was trained in clinical trials for drug development and was working in the field of smoking cessation, addiction. I applied the tool or process of drug development to this idea of a diet change. I have to say, with the first study I did, I was naively interested and didn’t know the hornet’s nest I was getting into. Looking back, there were some hints that my colleagues thought I was going off the deep end studying something like this, because they thought that eating fat was bad. Now I know that eating fat is not bad.

When I went up to meet Dr. Atkins, that’s how I got into it. I wrote him a letter and he called back saying I should visit his office. When people heard the name “Dr. Atkins,” they had this uneasiness about it. I still went to visit him and asked him what he does. I suggested that he pay us to do some research at Duke and he did. We did several studies funded by their foundation. The low-fat, meaning high-carb diet, was in full swing at the time. You had Snackwells and popcorn and the American Heart Association was putting ‘heart healthy’ labels on things like Fruit Loops, which is just bizarre to think about, because they were low-fat.

My colleagues here at first had some skepticism, like me. When I was doing the studies, they changed to saying that I sort of “cheated,” because I went to visit someone who had already done it for me. I said, well, you didn’t know it was healthy either! I didn’t come up with this. What I teach has been around historically since 1863, the whole idea of lowering carbohydrates. High-fat diets have been around much longer than the low-fat diet, which really was a construct of this governmental lobbying and industry food development, which led to the vilification of fat in the diet. There was a distraction going on in the research world; nobody was focused on sugar as the bad guy. I can’t point to studies that say sugar is what causes diabetes, but I know that if I take sugar and starch out of the diet, diabetes goes away. You see that the industry was pointing researchers to the exercise domain or to the ‘fat is bad’ domain. It’s only now that we’re starting to get some science wrapped around this, although we’ve been publishing since 2002. To get the large-scale trials to change the health system and other doctors, larger studies need to be done. That, however, requires a huge amount of federal funding, because these studies are large and the only organizations that can afford them are either companies or the federal government.

The idea now of fat being bad is bizarre. I should say that I was conditioned for this. I spent three months in France when I was an undergraduate at Stanford University and I learned how the French look at food. In France, they had no fear of fat, like having butter. They had some carbs in the diet, but they had no fat phobia like what we had in the U.S. There were a lot of things that just didn’t compute to me, scientifically. Now with the lens of all the clinical science that’s been done, the low-carb, high-fat diet is the one that’s been studied the most now – and it’s good!

I’ve often heard you present a tally of the low-carb versus the low-fat diet. What does that look like?

If you go back to the year 2000, 22 years ago, all of these research groups started studying low-carb diets. Ours is one. Dr. Will Yancy is the first author on our papers. When I look back, from 2000 to 2008, everyone chose a low-carb diet versus a low-fat diet in a head-to-head trial. What was lacking in the whole field of nutrition was head-to-head clinical trials saying one’s better than another. Even today, there are very few studies that look at a pure vegetarian or vegan diet head-to-head with other diets.

We’ve been indoctrinated for so long that the public still believes that a low-fat diet is the best option.

Human nature is quirky and irrational. Someone might even know the science, but say, “But, I like donuts.’ I used to help people quit smoking and a lot of people finally knew that it was harmful and then they went out to get help from a doctor to quit smoking. We’re at that stage where most people don’t understand how addictive sugar and starches are, so they don’t realize that they may need help to stop consuming it. It’s really just a drug.

I work now, collegially, with computer scientists and engineers who have come to this keto world and they explained to me that the paradigms shift in computer science and in technology electronics every few years, whereas the medical world and the human belief hasn’t changed from fat being bad to sugar being bad.

One of the reasons it’s slow to change is due to a tragic thing that happened where the U.S. government started to get involved. I’m sure there was a lot of lobbying to say that if you have a certain type of organization that gets money from the government, you have to follow the guidelines about food from the government. The U.S. governmental guidelines are pretty clear now that it was the lobbying of the wheat, corn, and sugar producers that got so many carbs into that USDA food pyramid initially. It takes time to undo all of that. I wish the U.S. government had no guidelines and a nursing home would be free to give bacon and eggs like they used to do for years and years before 1970. It’s complicated and it’s slow for a paradigm in the medical world and the governmental oversight of it to change.

In technology, things change all the time. I’ll use a crazy metaphor and say that if you’re talking about the low-fat diet, you’re basically using a phone with a cord. That’s when it was developed! I’m using a smartphone. You can use your cord phone, which still works, but I can do so much more with my smartphone (the low-carb diet).

Do you think we’re going to reach a time when the low-fat diet is going to be put to rest and people will not feel about fat as they currently do?

It’s slow to change, because we live a long time – if you have a fixed belief that’s not scientific, you have to wait for people to come and go and new people to grow up with a new belief. I think the smoking and nicotine example is a useful one: there are still people who smoke now, even though we know how damaging it is. There are many who are just super-addicted. I think sugar and carbohydrates will always be around, because of the addictive nature of them. The tobacco companies made a lot of money on taxation for the government – the “sin tax” on alcohol and tobacco. The government likes that, because they’re able to make money from it. The low-fat diet as a recommended diet is fading away from the medical world. It’s dying a political death, meaning nobody really says much about it anymore. There are always going to be a few organizations that push low-fat diets, because they were created to push low-fat diets. The American Heart Association wasn’t created to help hearts; it was created to push a low-fat diet. They’re always going to say saturated fat is bad. We have to cut carbs in the medical world or diabetes is going to just take over everything. We’ll have no money to pay for anything else!

Looking forward, we need prevention-minded people. We need people to get in there early, before diabetes has started. The prevention has to start with children. I can help with heroic measures, just by changing carbs. I can take people off 10 medicines, but it’s a lot of work. Most doctors aren’t going to do that. If we go and stop the young people from starting down this pathway, that’s where the biggest bang will be in the long run. Give fat to kids. Don’t worry about butter and steaks, rather be careful about the sugary junk foods, the highly processed sugar foods. That’s where the damage is in the long run.

I’m optimistic, but then, I’m an optimistic guy! It’s amazing how fast 20 years went by since my first introduction to the low-carb diet and we’ve been working as hard as we can to spread the word on it. Change is happening, it’s just slow.