Keto and kidneys: fact vs fiction – Adapt Your Life® Academy 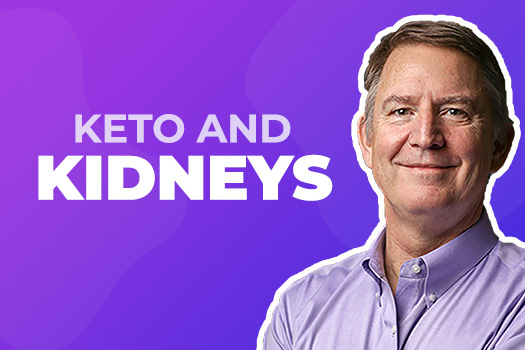 Keto and kidneys: fact vs fiction

Where does the idea come from that keto is harmful for your kidneys?

I get questions about this all the time. Doctors were taught, when I was in training—even up until today—that protein in the food is bad for kidney function. We’re just taught that. There’s no evidence for it. It’s one of those things that you get taught and then when you start asking for the evidence, the teachers just say, “Well, we don’t know.”

It comes from the idea that one of the functions of the kidney is to filter some protein out (of the blood) and keep some protein in. So, if you have protein in the urine, it’s a sign of a malfunctioning kidney or a kidney problem. Sometimes there is this illogic that because there’s protein in the urine, it must have been caused by protein in the food, which means that protein in the food is bad for the kidneys. Actually, when you try to find evidence for this in the medical literature, it doesn’t exist! It’s a preconception or prejudice against the low-carb diet. Keto, if you do it right, is not a high-protein diet anyway, so even if protein was a problem with the kidneys, if you do keto right, it wouldn’t be an issue. That’s just another misunderstanding about what keto really means, which is to get adequate protein when you’re running your body on fat and ketones instead of sugar and carbs.

I understand that there are five stages of chronic kidney disease – 1 being mild and 5 meaning that you may require a kidney transplant. Is there any reason that keto might worsen any of these stages?

No, there’s no evidence for that, even though there’s a lot of pre-judging. One of my colleagues at Duke University is looking at our clinical data. We now have thousands of people who’ve been doing keto diets or low-carb, high-fat keto, which is what we teach. It’s a ‘real food’-based program. You don’t add in oils and butters and things other than in the cooking. We’re looking at all the people who had different kidney diseases. The results aren’t out yet, but the preliminary looks fine. We’re in the process of getting that information published.

I think one of the things that has to be done now is that we need to provide evidence in terms of publications to show that this just isn’t the case. There are some things in medicine—or in any part of life or in the world—where even though there isn’t any evidence for something, people believe it anyway. If you want to try to dispel that prejudice, it helps to show evidence for it.

I was talking to one of my fellow keto-friendly doctors recently. A local doctor friend of hers—a nephrologist—was against keto. Three years later, the kidney specialist is all for it, because they shared enough patients. Changing the food leads to the reversal of diabetes, obesity, and all of these other non-scale things, like heartburn and PCOS. It’s really so powerful. Keto is data and evidence-based, unlike a worry about kidney function. It’s sad that that is the case.

I’ve even had people who are on dialysis,—meaning they have no kidney function—come to me. We can use a keto diet. Of course, they have to be monitored very carefully, because if someone’s on dialysis, they have their weight measured with every visit (usually that’s three times a week) and they go hemodialysis, so you have to watch the sodium and phosphate – things that a typical dietitian working with a dialysis center would know. You can do keto with people who don’t have functioning kidneys anymore.

There’s a lot of mistaken fear about it, when really, if you do it correctly it’s just real food and it’s healthy food.

In your clinical experience, have you ever seen the opposite—meaning that someone with kidney disease has fared better while they’re on a structured keto program such as yours?

Yes. This is one of those things where I want publications behind what I say, because it gets into the medical wrangling, but there’s a lot of clinical evidence for this. We observe in the clinic that protein in the urine will go away. If diabetes is the cause of the kidney problem and there’s a change in the kidney, that’s reversible, meaning that it can be changed, because diabetes is causing it and you can fix diabetes. Some people with diabetes can actually reverse their kidney problem by doing keto.

Right now, the patients that I see with diabetes come back to me, because they no longer have diabetes. Other doctors just “managed” the diabetes without giving them an option to fix it. If a doctor has a knee-jerk reaction like, “You can’t do that, because it’s bad for the kidneys,” think twice. It’s more nuanced than that. It’s that reaction that really has no evidence behind it.

You mentioned folks that are on dialysis machines needing to watch their intake of certain minerals. How does that work on a keto diet?

Keto doesn’t need medical monitoring if you don’t have medical problems. I think a properly formulated keto diet is healthy for anyone. Children are born in ketosis, which is a remarkable thing. Once you get into the medical realm, if the body has a disease like a liver, kidney, or heart problem, the body can’t handle salt and sodium in the same way. If you have these conditions, it’s important for you to do this with someone who understands it.

For most people, it’s a wash—meaning a neutral effect. If you have more sodium you’re getting rid of sodium easier, because insulin makes you hold onto sodium. (And if keto lowers your insulin, the body releases excess sodium more easily.) If you have a sodium-retaining problem, like liver, kidney, or heart disease, then you want to be mindful of the sodium. You may have been recommended to do a low-sodium diet. At first I carry over that recommendation into the keto diet – again, with medical monitoring. That’s what I do in the clinic. Sometimes, we adjust the fluid pills, the diuretics. It gets a little complicated for someone who doesn’t understand how the human body works regarding salt. In general, if you have no medical problems, you don’t have to worry about the salt anymore. You might even have to add salt, because your body is getting rid of the salt better than when you were eating carbohydrates before.

Can keto cause or aggravate kidney stones?

What’s interesting is there are certain medical conditions that can happen on any kind of diet. If someone has had kidney stones and the issue was related to diet, the diet they were on at that time (not keto!) was causing the kidney stones, so changing to a keto diet might be preferred. There is a worry about kidney stones, because sometimes after a change in your diet, a kidney stone happens within a few weeks. Sometimes that’s because the kidney stone was already there and the diet has a “flushing effect” on the kidneys, like getting rid of extra water, so you might pass a kidney stone early on when you do any sort of diet. Even if you just drank a couple gallons of water for a week, you might flush that kidney stone out.

Another thing that I see is gout. Patients might have a flare early on, but then they won’t have gout again, because it’s the underlying problem (off chronically high insulin) that is causing the gout. So, not to worry. Kidney stones are a bit complicated. If you have a couple, like two kidney stones, you should probably see a kidney stone specialist to see if you need treatment to reverse the metabolic issues that are going on. You can send away your urine and have it analyzed and make changes in your diet or with supplementation to prevent the recurrence of a kidney stone.