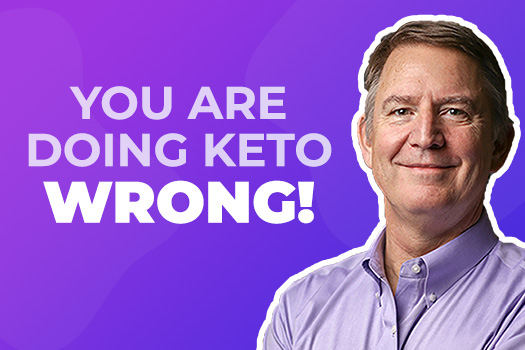 It’s no secret that keto or low-carb is very popular right now. There’s also never been a time where so much information is so freely available. Unfortunately, this has also led to massive confusion.

I’ve been in this world in research and in the clinic at Duke University now for over 20 years and it’s more popular now than it’s ever been. It’s a double-edged sword, as you say, because a lot of the information is not quite as well-validated and supported and it’s hard to tell the difference.

Your method hasn’t changed much in nearly 20 years. The reason for this is, it works! What have you learned over the years?

It was never as popular as it is now, because you didn’t have products and pills and gadgets and gizmos, and everyone likes those! It makes it seem new and gives you something to do. But I stand behind what I’ve done, because we’ve published the research studies. We’ve seen other people borrow it and use it in their own clinical practices, so I’m quite confident that what we teach is safe and effective. I’m not so sure about what other people teach.

Can you give us five examples of where you believe keto is being implemented incorrectly or being ‘done wrong’?

If you have medical problems and you’re on medications, keto can be unsafe if you’re not using a medically supervised approach. If you don’t know what insulin does and you don’t know how to use blood sugar monitors or you don’t monitor your blood pressure, keto can be done wrong and it’s not safe if you do it that way. Unfortunately, I’ve seen people blame the diet for things when it really was the medication that was the problem. They didn’t know that they had to reduce or change or even eliminate the medication that quickly. (Because keto can start to improve your blood sugar and blood pressure very shortly after starting.)

Then, if you’re not taught by someone who teaches you to use real food first, that’s a problem. I’ve seen people go down strange directions of buying products and thinking, “Well, I wasn’t hungry, my hunger was gone, isn’t that what keto is?” I run into people who do things like just drink apple cider vinegar and they’re not hungry, but then they’re not eating any food! That’s doing keto wrong. That’s not dangerous like being on medicine, but it’s unsafe and unhealthy in the long run.

There are a lot of ways to lose weight. We know that you can starve yourself and do prolonged fasting, but we don’t want to do that if there are other ways to do it that are healthier. I want to help someone.

The Obesity Medicine Association that I’m involved with wants to help people lose weight in the healthiest possible way. Don’t get trapped by drinking your apple cider vinegar or eating “keto cookies” without eating real food first. Getting the fundamental teaching will help you avoid the unsafe medication errors that I’ve seen and the unsafe use of these products where you’re not eating food.

Some people really believe that a keto diet is just about consuming copious amounts of fat.

This is in the category where it won’t harm you or be dangerous, but it’s not going to be very effective for you for weight loss. I see a lot of people learning from companies that are selling you products that tell you, “This is what keto means,” but I don’t use any of these products in the program that I teach. I teach using real food.

But there’s a false belief that because oils and butter and cream have no carbs in them, you can have as much as you want. We say that you can have as much as you want of some foods, because these are the nutritious foods—generally the meats, the poultry, the eggs, those sorts of things. You don’t have to worry about how much. But with high-calorie items, I’ve seen a lot of people think that that’s what keto means—that you have to put oil in your coffee or butter on your steak. That’s not what keto means. If you’re trying to lose weight or fix diabetes, you don’t want to be adding in oils and fats and things, because you have to burn through those calories that you’re consuming there first, before you’re going to start burning your own body fat.

What about total versus net carbs?

The time-honored way to count carbs is using total carbs, not net. For the last 100 years, when doctors were using a clinical therapeutic keto diet, they always counted total, not net carbs.

Around the year 2000, the idea of “net carbs” came about. The idea was that we’re understanding metabolism more, fiber doesn’t get absorbed, sugar alcohols don’t raise the blood sugar, so therefore, you could have those. In theory, it shouldn’t affect how the program would be. The problem is in the practical reality, it does affect how things can work. Some people do absorb even fiber that’s called non-absorbable fiber. The only way you know is by checking your blood sugar after eating it.

From my perspective, when people come to me, they want things to work the first time, every time, like a prescription drug. So I’m not going to use the variability and the uncertainty of net carbs when someone’s asking me for the confidence that this will work.

I have to take some credit for causing the confusion, because I’m an author on The New Atkins for a New You book, and the Atkins company has been pushing net carbs now for 15 years or so on their website. The distinction I want to make is that it’s not wrong; it’s just not quite as effective. Kind of like an over-the-counter drug. It’s not wrong that there’s Tylenol or ibuprofen over the counter, it will help a lot of people. The net carb idea can help a lot of people, but if you want the stronger prescription strength or the effect that will really help your diabetes and weight loss, then you want to use total carbs, not net carbs.

To put it in another way, I’ve seen people get stalled or start out and it doesn’t work using net carbs. All I do is help them understand that change—from net carbs to total carbs—and it starts working; they start having results. Then I’m happy and my patients are happy.

There are now so many different keto cookbooks, which are wonderful, but many people are tending to over-consume calories. At the end of the day, calories do count.

The keto diet works for weight loss and for diabetes reversal by having you eat less. You eat fewer calories, but you don’t have to count calories. That’s the beauty of it. It becomes a low-calorie diet compared to what you were eating before, almost effortlessly, probably for about 98% of people. In the clinic it might be a little lower than that, because you may be on medications, or you’re unable to be physically active, you may have arthritis. So it becomes a low-calorie diet even though you don’t count the calories.

I also want to emphasize the overuse of almond flour, because I’ve had people just cut out almond flour and then the program starts working again. It might seem like it’s a very small thing, but small things make a big difference, because we’re talking about very small amounts of sugar in the blood. It’s the sugar in the blood that drives the insulin and it’s the insulin in the blood that drives the fat storage and the fat creation.

We’ve used something now for 20 years, based on other people who used it for 30 years, and other people using it for 50, so, it’s going to work.

Let me recap the five mistakes you have spoken about:

That’s right. The reason we care is that we want people to do keto right. We don’t want bad ways to give keto a bad name.

How do folks get back to the basics and follow the program with certainty that it’s going to work the first time, every time?

Get a reputable source of information that starts with real food. If the program starts by teaching you to have protein first, that’s going to be a good program. You don’t want a program that tells you that in order to do a keto diet you need exogenous ketone products and supplements, or to do a keto diet you need to eat a lot of fat. That’s not the sound nutritional foundation that you want. You want a program that’s going to teach you to use real foods, and protein comes first.