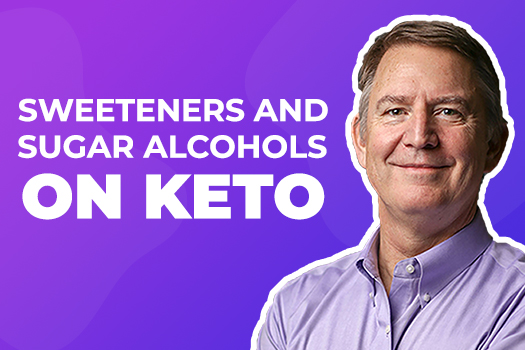 This blog is an adaptation of Dr Westman’s video on ‘Sweeteners and sugar alcohols on keto’, which we have included at the bottom of this article.

Can you help us understand the difference between sugar alcohols and non-nutritive sweeteners?

Let’s just step back a minute and think of why we want sweet things and why this is such a controversial topic. My view is that we’re trying to substitute for sugar, because we’ve all been eating sugar or drinking sugar for so long. If you raise a child without sweetness at all, they tend not to go for lots and lots of sugar. You have to keep that in mind, that we don’t really need sweet things. We don’t really need to have sugar to survive. Of course, most of us have been raised with it and think it’s fine, and have even been taught that fat is bad and sugar is good and has a free pass, when the effect of sugar on the body is what’s bad. It raises the blood sugar and raises insulin – those are the things we think are unhealthy. So, these other sweeteners were developed to try to mimic the flavor, the sweetness, to develop products that are like sugar, have the sweet taste, including candies or sodas.

When you get down to the different types of sweeteners, there’s a lot of controversy. Sugar alcohols were the first ones on the scene. In the mid-1900’s, products like cyclamate fell out of favor because they were accused of having cancer-causing properties. Now, not all sugar alcohols are like that. Some sugar alcohols are sweeter than others, so you need less sweetener to get the same sweet taste, and what that means is that they have less of a metabolic effect. So, for me, it’s what happens when you consume these things and if it’s possible to lose weight or be healthy while consuming those things. The sugar alcohols are a little different in that some of them are not so sweet and you need a lot of them (meaning in milligrams) to get the flavor of the sweetness. Among all of them, you want the ones that have the lowest carbs to give you the sweetness.

This leads me to my simple view of all these things – how many grams of carbs are in it? Even if it’s not sugar, to me it still counts. A trivial amount of something is not going to metabolically make a big difference.

It’s interesting, because most people think that sugar alcohols are the same. Besides person-to-person variability, there is a glycemic rating on different sugar alcohols. For example, maltitol has a GI (glycemic index) rating of 50-52, and erythritol has the lowest, with a GI rating of zero.

Remember, until there’s a study that says for example, ‘We randomized people to have erythritol or no erythritol and they lived longer’ – there’s no health benefit of having these things other than it keeps you away from sugar, which gives you the bad metabolic effects. So, I suppose there is a health benefit of using these things if the reason you’re doing it is to keep you away from sugar.

Typically folks that follow the ‘net carb’ method will say that sugar alcohols are okay and you don’t have to count them in the total carb count, but I have often heard you say that there is person-to-person variability and it still does affect some folks. What are your thoughts on that?

My perspective is one of being in a clinic with lots of different people, lots of different types of metabolisms. Most people come to me for weight loss or fixing diabetes, but not everyone. So, you have to be careful who you listen to on the internet – if it’s someone who is otherwise healthy and lean, never had a metabolic problem at all, then of course that person is going to be able to have a more flexible diet than you might if you’re trying to lose weight or fix diabetes. So, that’s the first step – what are you trying to accomplish? Are you trying to make this a metabolic, therapeutic approach or are you just doing this because it’s a fashionable thing to do and you like to eat meat?

The net carbs is sort of the ‘over-the-counter’ type of approach, meaning it’s not prescription strength. It’s not as strong. If you don’t count the sugar alcohols or even fiber grams, it might not work for you if you’re trying to lose weight, fix obesity, fix diabetes and those metabolic effects. I know that’s quite confusing, that the internet is giving all sorts of information and people spend hours trying to find an answer and they are left with even more confusion.

From my vantage point of treating people in a clinic, I give advice, they come back, some things work, some things don’t – the net carbs approach works for some people, but not everyone. Total carbs, where you do include sugar alcohols and fiber grams, will pretty much work for everyone. So, the total carb method is what I teach. Again, from my perspective, people come to me, all shapes and sizes and metabolic differences, and what I do has to work or they won’t come back! So, I prefer total carbs, not net carbs.

On the other hand, we have non-nutritive sweeteners which typically don’t have any carbs whatsoever…

In my experience, within the general range of human consumption, you can go overboard on anything – even someone on a relatively benign non-sugar sweetener might have diarrhea if they’re having 20 or 30 servings a day. So, within the typical use, I look at the total carb content in the product and sometimes it will say zero, but it’s really not zero, because from 0.5 grams and below per serving, it’s rounded down to zero (on food labels in the US). Again, in the typical use – 5 to 10 of the little packets of something a day – most people have no problem with pretty much any of these sweeteners, as long as you look at the total carb content, because that will immediately erase the natural sugars that some people are promoting as being keto-friendly. It’s sugar, but under a different name. ‘It’s natural sugar’ – well, no, that’s still sugar. ‘It’s agave sugar’ – no, that’s still sugar. ‘It’s a blend of sucralose and sugar’ – no, that’s still sugar.

Some websites and programs recommend that everyone measure their blood sugar to look for that individual variability that you were talking about, but most people aren’t going to do that. You can get these meters to check the blood sugar and check the ketones and most of my patients won’t do that – they say it’s too much, too complicated, So, the total gram method, and even looking at sweeteners through the lens of total carbs, is useful and also effective.

You want to limit the extent to which some of the sugar alcohols have carbs in them. Some of the old fake candy or sugar-free candies will actually have a lot of sugar alcohols in them. So, you have to be aware of those. The newer ones are using these newer products that have less carbohydrate in them. Again, the whole point here is to not eat or drink something that impacts your metabolism, meaning the blood sugar or ketones, if you’re on a keto diet.

In the past we have had a lot of people who are quite shocked to hear you say that you are pretty okay with non-nutritive sweeteners – most think that they link to cancers and health issues, but this simply isn’t true according to the science. You certainly taught me a lot.

I see why it hits the common sense button – we call it ‘face validity’ in the research world. ‘Of course you wouldn’t want to have those things, because they’re not natural…’ But there are a lot of not-natural things we do or have. Again from my perspective – what does the science say and what does the practice of using these things tell me through the clinical practice and experience that I’ve had?

We’ve estimated that I’ve seen 8,000, maybe 10,000 people over certain periods of time, and the people who come to me are not metabolically healthy. So even for these folks the non-nutritive sweeteners really don’t give you any nutrition. They are just to mimic that sweet taste. I say the best one is the one that tastes best to you. If I say the best one is stevia, because it’s natural, and you try stevia and you don’t like the flavor or the aftertaste, then I’ve lost a moment of teaching. So, use the one that you like best, but make sure the total carbs are low.

You want to stay away from ‘products’ in general, unless they’re really clean, like the Adapt products, just because there are generally more additives. On a lot of those bars, even if it says ‘keto,’ a lot of them really aren’t truly low in total carbs – they use the ‘net carbs’ as a marketing tool to get you to think that they’re going to be fine. But again, for some people, they will be fine. My perspective is that I want to meet people where they are and get it to work across a range of different metabolisms.