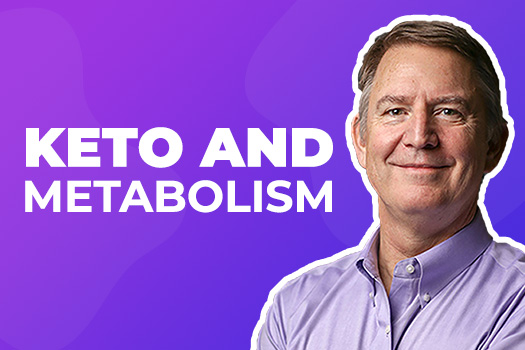 How does metabolism work in our bodies?

It’s a big term! It encompasses lots of different things, but the definition of metabolism is basically how your body runs. Like a car running – what machinery it uses, what fuel it uses. It’s actually very complicated because it encompasses so much.

As an internal medicine specialist and now an obesity medicine specialist, when I hear someone talk about metabolism or when I’m talking about it in the clinic, it really means your metabolic rate. If you have a slow metabolism, that means the idle speed on your car is very low, so to speak. Metabolic rate is how fast your metabolism is going, which means how much energy it’s consuming. You may be surprised to know that just by sitting here, we’re burning as much energy as a 100 watt light bulb. You imagine, if you’re around a light bulb, it heats the air, right? That’s why when you’re in a room with 500 people, it warms up over time, because we’re all just sitting there burning fuel and generating heat. That’s part of the metabolism – the fuel you use, the heat you generate.

It’s more complicated than just genes, although genetics do play a big factor. You may know someone in your family who might not be able to go around running everywhere and have a ‘high metabolism’. I have a brother – we’re three boys – and my one brother is a natural exerciser. It’s not fully worked out, but what it looks like is that if you’re naturally able to burn sugar and burn fat off your body really well, you’re going to have access to that energy. You’re going to be the genetic type who has a high metabolism, meaning that you’re able to access the fat and sugar stores even in times when you’re not eating much or eating sugar. You can actually burn fat at the same time. So, there are different metabolic types. You want to match the food, the diet and the lifestyle, to the person. There are some folks who naturally just never have the urge to go out and exercise. That’s the genetic basis of it.

There’s also an environmental basis, which is quite easy to explain. Once you start developing extra fat weight on your body, the fat cells send out all these signals for you. These are the signals that make you hungry and make you want to exercise less. Once you get into the vicious cycle, the spiral of gaining weight, all the fat cells want is more weight. The way they get more weight is by telling you to exercise less and to eat more. When I look at a “lazy” person, just watching TV, it’s the extra weight and the signals that come from the fat cells that say, “Slow the metabolism, just lie on the couch; you have no energy.” You then eat more so you can feed the fat even more. So, there’s the genetic tendency toward this but there’s also the environment. Once you start gaining weight, the weight tells you to exercise less and to eat more – and, of course, eat more carbs! The fat cell is almost like a cancer that wants to keep growing, and it sends out signals for you to be sedentary and eat more.

This gets wrapped up in all sorts of emotional and judgmental things. You might get mad at your family member for just lying around and eating and watching TV or playing video games, when actually it’s the food that leads to the weight gain and the behavior of just sitting around and eating more. It’s not the individual – not a personality or character flaw. It’s the food that generates the fat, which generates the behavior. It’s the people who don’t have this metabolic issue of gaining weight who are the ones that usually preach that you just need to exercise more and eat less. It doesn’t work for these other folks! It’s a different type of metabolism.

Absolutely. Your metabolism is controlled by different hormones. The most common one we think of is a thyroid problem. The thyroid is a major regulator of metabolic rate. It’s not all that common, but it’s common enough that we check for it in a weight loss program like mine. We don’t want to miss a thyroid level being off. Even then, the blood levels aren’t perfect. There’s a transition from some years ago where doctors would ask how people feel as a guide for treatment, to now measuring a blood test instead. So, if the blood test is normal but you feel like your thyroid is low, doctors don’t do anything! That’s a matter for a whole other class, but I would have to say, it’s uncommon in my office to pick up a low thyroid that another doctor hadn’t already picked up.

Most doctors in internal medicine and family medicine will check the thyroid level, but they won’t do further testing of how you are feeling. That’s an important part. Many doctors also don’t tell you to cut the carbs out, which is a very effective way to fix the metabolism. So, I don’t typically check for anything beyond the thyroid levels. I found that even though the adrenals, the liver, the pituitary and hypothalamus are all involved, the diagnostic testing that we have available in the clinic is not perfect and in fact it can be misleading. In my experience, just measuring the hormones – thyroid, and insulin – sometimes will tell me enough. If I’m going to be teaching you to do a low-carb or a keto diet anyway, I don’t need to measure these things, because the metabolic change that happens when you do a low-carb diet generally fixes all of these other things. The hormonal situation that keeps the metabolism low is a result of what you’re eating. You can measure these things and give supplements, or you can just change what you’re eating in a rational way. The (low-carb) method that we’ve used has been around for 150 years. You just need to get the toxic food out of the mix.

The thyroid itself is quite complicated, because there are different metrics that would need to be monitored.

The medical world over the last 10 to 20 years since my training, has made these shortcuts. “Shortcuts” meaning, let’s just do one test and that should work almost as well as checking three tests. It’s called a screening type of testing.

Doctors who don’t do this as a specialty will be taught to just check one thyroid test, the TSH, and say that it’s good enough. When you come to a specialist like me, I can’t miss one in a hundred abnormalities, so I will test more. It’s a normal process. In the first tier, you do a screening level, but if you’re going to see a specialist they do tests in greater detail. You might get false reassurance from your primary care doctor because they’re only checking one test, when checking all three or even five can help make sure, 100%, that you don’t have a thyroid issue. If you start a keto, low-carb diet and it’s working, you’re losing weight, the hunger is going down, your body inches are going down, then you really don’t need to worry about the thyroid level, because what you’re trying to achieve is getting better.

Darren asks: “If I have metabolic syndrome, does this have anything to do with my metabolism?”

Marianne asks: “I’ve been on keto for six months and I eat far less than I usually did before I was on keto. Will this make my metabolism slow down?”

I hear that a lot. No. In fact, the suspicion has been that when you eat a keto diet, your metabolic rate goes up a little bit. There are two major studies that are looking at two points of view. As you’re losing weight, the metabolic rate is going to go down; that’s a normal compensation. It goes down less when you eat a keto diet. There’s a common urban myth out there that you have to eat to speed up your metabolism. This is not true in the keto context. I’ve seen research for those who do eat carbs and push carbs as a way of improving health and it may be true there, but it’s not true on a keto diet.

We’ve measured not only blood sugars, but also blood ketone levels. We found that if you have a history of being heavy all your life, which means you’ve had a carb problem all your life, then you’re going to be in this situation where if you have a little bit of carbs it will affect your ketone metabolism. It can shut down ketosis for a week, maybe even more. We’re just scratching the surface and studying these folks. We typically teach that if you eat some sugar or too many vegetables, you might stop ketosis for three days. That’s if you’re otherwise healthy. What we’re finding is that if you do have that slower metabolism genetically, you might be knocked out of ketosis for a week or more.

But don’t despair – what all that means is you just have to be really strict. I’ve been pretty clear in my teaching that you have to follow this every day, 24 hours a day. It’s not a pill you can just take here and there. It’s a “prescription” way of eating for every day. We’re finding that there are metabolic differences even in terms of the keto metabolism, not just the metabolic rate. The idea of just cutting carbs out will work across all these different metabolic types.

Simon asks: “I don’t have a thyroid gland. Will this affect me going on keto?”

The thyroid problems can lead to either ablation, meaning you’re killing the thyroid cells, or removal of the thyroid itself. In these cases you’re given a supplement, generally a prescription-strength thyroid hormone replacement. There’s a whole art to the use of these different medications. Some are just T4, some are T3, some are combinations, some are dried animal thyroid. If you have no thyroid gland, the doctor should measure the thyroid level and then replace the hormones if they’re low. The interesting thing is that if you’ve had an operation, you might have some thyroid tissue remaining, still making thyroid hormone in your body. The measurement in the blood tests will tell you if you need thyroid replacement.

Is it okay to do a keto diet without a thyroid, even if you are on those supplements?

Absolutely yes, it’s okay to do a keto diet if you’re on thyroid hormone replacement.