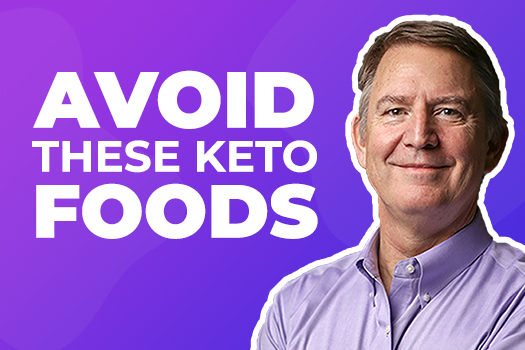 This blog is an adaptation of Dr Westman’s video on ‘Avoid these Keto Foods’ which we have included at the bottom of this article.

Why do we need a topic like this? Isn’t keto simple and easy? Aren’t there ‘keto foods’ and ‘non-keto foods’?

A lot of people are learning about the keto diet on the internet. The internet has a lot of confusing information. In fact, if you learn from the internet, you might think there are specific keto foods and non-keto foods and if you look at the store, there are products now that say ‘keto’ on them. The first thing you need to know is there’s no such thing as a ‘keto food’. Keto is a metabolic state. Keto means you’re burning fat. I’d like to go over some differences between what we teach – we have a method that’s simple to follow – compared to what a lot of patients are telling me they have learned about keto from the internet.

Products marketed as suitable for everyone following a keto diet

There is no such thing as a keto product. If it says keto on it, it doesn’t mean it’s necessarily good for you to eat when you’re trying to be a fat burner or to be in the keto metabolism or to be, I’ll say, on a keto diet. I’ve seen now, over and over again, the mistaken notion that everyone can do keto in the same way. Be careful if you’re learning from someone who has no weight to lose and you’re trying to lose weight…If you’re learning from someone who exercises all the time and you don’t exercise. That type of keto diet that they’re teaching might not be appropriate for you. So, my approach is to teach something that’s flexible and easy, and works for people with pretty serious metabolic problems like obesity, diabetes, and polycystic ovary syndrome. All of these problems require a stricter version of the keto diet than what you’re typically taught on the internet.

Avoid keto drinks. You don’t need drinks that say ‘keto’ on them to be in a ketogenic metabolic state. In fact, the ketones come from your body fat when you’re burning fat really well on the keto diet. Drinking ketones is not necessary. It has never been studied in high quality research for clinical use for obesity or diabetes treatment. These keto drinks need to be avoided. I’ve saved a lot of money for people by allowing them to realize they didn’t need to drink ketones to be in a ketogenic state.

Along with these other drinks comes the “Bulletproof coffee” idea – that you have to drink oils and medium chain triglycerides. You might have seen these advertised, called MCTs – you don’t need these to be in a keto state. Again, beware of people selling products who didn’t have your same journey to follow. There are a lot of people I see pushing these concepts, who have never had to lose weight themselves or fix their own diabetes.

You don’t have to drink apple cider vinegar. I have met several people who did not enjoy that and I’m not a big fan of having you eat or drink anything you don’t enjoy, because you’re not going to be able to sustain that over a long period of time. You don’t need to have apple cider vinegar, or ACV. In fact, it’s never been studied in the context of a keto diet to see if there’s additional benefit from it.

If you’re starting out and you want the keto diet to work the first time, every time, avoid eating nuts. No cashews, no almonds, no peanuts. That means no peanut butter, no almond butter. That means no almond flour and no coconut flour. If you want to get this started right the first time, every time, on “prescription-strength keto”, you want to avoid nuts and all the products that are made from nuts. The response I typically get is, “But, so-and-so says it’s okay!” Well, if so-and-so was doing prescription strength keto to fix obesity and diabetes and they have that kind of metabolism, they can eat it. That’s the other thing to realize: there is individual variation. If you’re eating nuts or nut butters or nut flours and it’s not working for you, then try it without the nuts. This is the number one thing that I see as an inappropriate assumption – that everyone can eat nuts on a keto diet.

There are all sorts of keto junk foods now. In fact, if it says, “Great for a keto diet”, and it’s on a shelf at the store, I advise my patients to avoid these things, because “keto” is not a carefully monitored term. Any company can now put keto on the product. I’m seeing, basically, keto junk foods being made out there now. So, stay away from fake foods. I want your nutrition to come from real food, not these fake foods. There are other ways to get sweet things than to have the fake keto candy bars that are out there. They will stall you or make it so it doesn’t work. Again, if what you’re doing is working and you’re having those things, great! Although, my preference is for you to get the great nutrition that’s in real foods, not these processed foods that are out there.

Overconsumption of foods high in calories

Probably the next most common mistake I see is over consumption of foods that are high in calories. You have to be careful to not have too much cheese, be careful to not have too much cream, be careful to not have too much oils and butters, those sorts of things, because they do have a lot of calories in them. At the end of the day, if you’re trying to fix obesity, or fix type 2 diabetes, you’d want to have a diet that’s limited in calories compared to before. That happens pretty much automatically for everyone if you’re following a well-formulated keto program. It’s very surprising to some people to realize that they have to limit the vegetables as well – the non-starchy vegetables. You know the ABCs are asparagus, broccoli, brussels sprouts, cauliflower, celery, which are the main things consumed in my area by my patients. These are all fine, but there’s still a limit to non-starchy vegetables. Things that have zero carbs generally are okay, but you still have to limit the high-calorie items like cheese, creams, and oils. And vegetables have carbohydrates, so you have to limit the vegetables as well.

I hope that’s helpful. These are keto foods that are out there in keto teaching that you might think everyone is able to eat. When I help people understand that their metabolism might not respond the way the teacher or the influencer out there on the internet taught it, they learn to cut out nuts, limit cheese and oils, limit vegetables, and then it works like a charm.

What’s great about a keto diet is that hunger goes away within a day or two, and I typically see one or two pounds per week of weight loss when it’s done right. If you’re not getting those kinds of results, you might try switching to a different type of teaching about the keto diet.