What is visceral fat? – Adapt Your Life® Academy 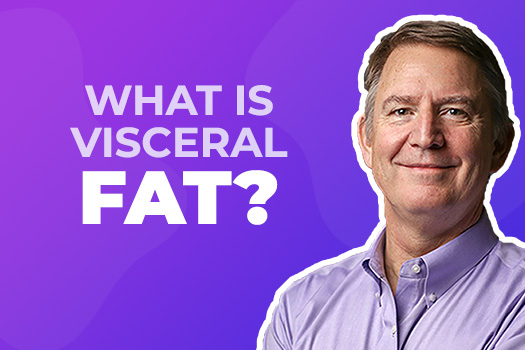 What is visceral fat and why should you care?

What is visceral fat and how is it different from subcutaneous fat?

I don’t have a whole lot of people coming to me asking what visceral fat is, but it’s important to understand the difference between visceral fat and other kinds of fat, especially as these more unusual sorts of fat syndromes are being talked about more, like lymphedema and lipedema. ‘Viscera’ means organs (meaning internal organs) and you might know the term ‘eviscerate’, which means to take out the organs of, for example, a wild animal. So, visceral fat means the fat that’s around those visceral organs. The easiest way to think about visceral fat is belly fat.

Is visceral fat more of a risk factor than subcutaneous fat?

Visceral fat is really what’s inside when someone says you have an increased waist circumference. Studies are pretty clear that an increased waist circumference is linked and maybe even causal to atherosclerosis, which is the root cause of heart disease and stroke. That’s why visceral fat is so important and something that we want, as physicians, to fix or to help people fix. So, losing weight internally is not just cosmetic; it actually reduces your heart disease and stroke risk if you address that visceral fat.

What is the difference between visceral and subcutaneous fat?

Subcutaneous means under the skin. It’s a different type of fat, and as you see in most people walking around, it doesn’t always get larger when you see the belly of other people bigger. There are conditions called lipedema and lymphedema, where fat accumulation is not in the belly; it’s in the legs or lower body. It’s not just under the skin, but it’s actually in the tissue around the muscles and outside the muscle. So, subcutaneous fat (lymphedema and lipedema) is not associated with the same risk as visceral fat.

In my office, the BMI (body mass index), which is a ratio between a person’s height and weight, isn’t always perfect. It works pretty well in my office, but you don’t want to just assume somebody has visceral fat if their weight is up. Often I can just see that by looking at somebody. If the legs are large and the belly’s small and there’s a stovepipe appearance, meaning that the legs are cylindrical and then they taper at the foot, that’s lipedema, not visceral fat. A keto diet is good for that, but most doctors won’t recognize lipedema. They’re just in tune with the waist circumference and visceral fat. There’s a big difference between visceral fat and other types of fat metabolically, meaning the correlating and causing all of the things we want to stop, like heart disease, stroke, vascular disease (which is really the disease process that we’re trying to fix when we help someone lose weight and fix their metabolism).

Can you explain the risk factors for people who are thin on the outside and fat on the inside (TOFI fat)?

Most of the time these folks have elevated visceral fat. It’s interesting, because I remember someone in my clinic who had a liposuction maneuver (where the doctor went in and removed the fat around the viscera), so that when he regained the weight, it was very tight. The number of cells was reduced so the fat that came back caused a tighter picture or manifestation on the outside. Internally, you may have fat; it just doesn’t show up on the outside as much. This may be because you’re not able to store fat in that way. TOFI really means that you don’t have the outside look of obesity, but you still have the internal manifestation of the metabolic problem with the visceral fat being the probable cause of it.

Carbohydrates play a big role in this, in that someone who has TOFI or has that metabolic problem can fix that by changing the food, not necessarily by losing weight. You might have a metabolic problem, but look lean, not obese or overweight on the outside. To really know you have to have some blood tests done.

Are there any warning signs that there is fat around the organs?

Blood tests will make you more certain of what’s going on. All the other signs of insulin resistance might be present, so you might have skin tags, acanthosis nigricans (a darkening of the skin, a velvety, gray or black appearance in skin folds, like your neck, knuckles, knees), you may have irregular periods or polycystic ovary syndrome (PCOS). These are all insulin resistance manifestations that may not have obesity related to them. They commonly do, but they don’t always.

What is the easiest way to get rid of visceral fat? Is it to go on a keto diet and restrict carbohydrates?

Most people think that exercise will fix everything. I have to put that out there, because exercise really doesn’t lead to weight loss unless you restrict the diet (calories) at the same time. There’s a saying that “you can’t outrun a bad diet” (a bad diet being defined as either high calorie or high carb). There are a lot of ways to fix visceral fat, and really, the weight loss that people are trying to achieve is fat loss.

In the comparative trials looking at low-carb keto diets versus low-fat diets, the low-carb diets were as good or better, in fact. When you look at them, the score is something like 30 to nothing – low-carb wins. I don’t want to oversell things, or say that other things can’t work. I’m careful to say there are a lot of ways to do it, but keto and low-carb is a great way to do it. It’s what I’ve used in my clinic for the last 15 years. It’s relatively simple to teach.

The hallmark of a keto diet is that hunger goes away after a day or two. Most other diets leave you hungry and you want to keep eating. On keto, the desire to eat goes down so much that you don’t really have to restrict calories. You do it automatically, without even trying, because hunger reduces naturally. For just about everyone, that’s what it does. Low-fat can help people to lose weight, but my preference is to use a low-carb keto approach, because it’s easy to teach my patients.

PrevPreviousThe many benefits of keto
NextAre you on medication for T2D?Next