Why Dr. Westman's Method of Keto HAS to Work - Adapt Your Life Academy
Skip to content 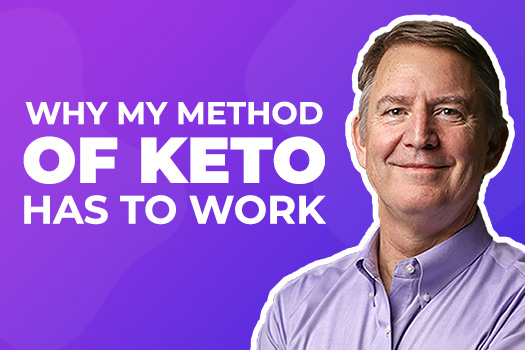 Why My Method Of Keto Has To Work

This blog is an adaptation of Dr Westman’s video on ‘Why My Method Of Keto Has To Work’ which we have included at the bottom of this article.

When we speak of your brand of keto, what exactly do you mean?

We’ve been in this business, this keto diet world, for over 20 years at Duke University where I am an Associate Professor of Medicine and director of the Keto Medicine Clinic. We’ve seen an explosion of information and people being leaders and having followers on Instagram and Facebook – it’s been really amazing, and there are a lot of great places where you can get information. But, since I have now been involved with this for 15 years in a clinical setting, where people come to me as a doctor, I’ve had to learn the ins and outs of how to do this with many different types of people – different backgrounds, different socioeconomic levels, different personalities. And so, in a clinic, if I don’t have it work, people don’t come back. So, the short answer is: if my brand didn’t work, I wouldn’t have a job.

To help our audience, give us a snapshot of the types of conditions your patients come to you with.

This is one of the reasons why keto, low-carb, high-fat, LCHF – different names for a similar thing – can be so easy and effective. If you don’t have these other medical problems, you might not even have to do keto perfectly. You can do it every now and then. So, you want to be careful what you’re trying to accomplish with a keto diet. If you have medical problems like diabetes, pre-diabetes, PCOS, fatty liver, or say 50, 100, 200 pounds to lose, it’s a journey that you’re going to have to do for a while, where you’re going to want to do an effective “prescription-strength keto,” because any other version that’s not quite as low on carbohydrates might not work for you. You might learn from an internet source, or someone who is young and otherwise healthy, who didn’t really need to do keto in the first place. So, you want to find a teacher who actually has experience with people who have your issues.

At my medical clinic at Duke, I’ve been treating people with all sorts of medical problems with this type of keto diet, so I know it will work, even if you do have complicating factors like being on medications. It’s a common source of confusion for people when they follow someone who’s young and otherwise healthy, and that style of keto didn’t work for them. So you need to be careful of where your information is coming from – even though a guru or doctor or influencer did it themselves a certain way, that doesn’t necessarily mean that it’s going to work for you. You want to try and find a teacher who has that experience with a wide array of people and problems. Again, my work that I do for a living at a university-based private practice relies on people coming back to me for the return visits, so that I can bill within the insurance, Medicare, and the Medicaid system. I’ve learned to focus on the most important things. I don’t get distracted by things that won’t work, products that might or might not work and cost money, that complicate things. You don’t have to do any of that, because most of my patients aren’t going to do that. So, I have had to learn a system that’s pretty flexible to help a lot of different types of people and medical conditions.

You have been doing this for nearly 20 years – have you seen that your diet has changed or evolved over those 20 years?

When you really step back, I learned from Dr. Atkins, husband and wife doctors – the Eades – who wrote Protein Power and had a clinical practice, using what they taught. So I sought out doctors who were using this, not only writing books but actually using it in their clinical practices. A common theme that really has maintained until today is that I keep the carbs very very low until you are near your goal. That’s a common source of confusion, because the diet books, the Atkins books, say, “Do two weeks of the strict diet and then add back carbs.” We don’t do that in the clinic now. In our latest book, End Your Carb Confusion, we explain that if you need to be on that lowest level of carbs and these different phases, it’s okay to stay there for a long time.

Looking back, I was careful to learn from doctors — I’m a doctor, an internist and an obesity medicine specialist — doctors who had their own practices. They had developed approaches that had to work. I’m finding that a lot of people today might not have learned at that level of detail.

That’s been an interesting thing to watch. Being blissfully happy within a clinical practice at Duke, we haven’t really been on the internet in a big way until recently. We were known as the clinical center that did the research to back up all of these other people who are out there on YouTube and Instagram and Facebook.

The approach that we use has always focused on proper nutrition, which means protein coming first, not fat. The old game we played as children where you whisper into someone’s ear and they go around the room and it comes out the other end totally different – that’s what has happened to the keto message. The keto message became this “Eat fat, drink ketones,” where you have to have ketones and oils and MCT… No, we’ve always taught that protein comes first and if you’re trying to lose body fat, you don’t want to eat or drink fat. You want the ketones to come from your body fat. So, that’s probably one of the most common misconceptions today, is that the keto teaching says you need to eat fat to get ketones or you need to drink oils and drink ketones to get ketones – no. Your body generates its own ketones from its body fat. That was known, now for the last 50 years, by these doctors who developed these methods.

Dr. Yancy and I at Duke University are the team who really formalized what had been done for a while, into the medical research setting. Our papers go back to the year 2002. We’ve been studying and publishing about this for a couple of decades now.

About a year ago, you changed the name of your clinic – could you tell us a little bit more about that?

We started with the Duke Lifestyle Medicine Clinic and there’s a popular textbook called Lifestyle Medicine. I’m in an academic setting, where I have to hold up the standards of whatever the peers in my university would want me to do, so I’m not off on my own. I’m within a community of doctors. Duke is a great place, because they are very evidence-based. If you generate your own research, like we did, they’re going to respect that, even if other people don’t.

So, “Lifestyle Medicine” is what we chose. There’s a textbook on ketogenic diets and keto treatments. So, being more honest about what I ask people to do, I really just use a keto diet. I don’t use other aspects of lifestyle medicine, which include exercise, activity, and stress management. And that’s largely because the people coming to me today are unable to exercise, or they’re unable to afford complicated psychological stress management programs, so really, just using the keto diet can be very, very effective. So I changed the name of the clinic to reflect what we really do, the power of it, and the idea that there are textbooks now that support the use of a keto diet at this kind of level.

What is the name of the clinic now?

How would someone learn your prescription method? You are the co-founder of the Adapt Your Life Academy, which has been extremely successful – we only launched that in November 2020 and have already had over 2000 people going through the Academy and learning this method. Can you speak a bit more about that?

I’ve been using a keto diet for a long time. I think it’s healthy eating. If you don’t have medical problems or are on medication, you can do this on your own, with the proper teaching. Again, it’s not about oils and purchasing things – it’s about real food. I think it’s fine for anyone to do, even children. As long as you are not on a medicine that might become too strong. The doctor’s role is to help you get off medication safely. It’s called “de-prescribing” or “un-prescribing.”

We have a lot of ways for people to learn – we’re trying to find multiple teaching methods to meet the needs of different learners. These are as simple as following a list of foods, which can be obtained at drwestmanonline.com – it’s known as “Page 4” on the internet. That’s not enough for a lot of people who want more information. We now have our End Your Carb Confusion book, which is available at any major bookseller, if you like to read it, and we don’t make things complicated. Our job is to simplify things, keep it as simple as possible. We also have the masterclasses at the Adapt Your Life Academy if you like to learn by video and print-outs and want to be in a group of people who are doing this. So, at Adapt Your Life Academy, we really have several different methods to teach people, which I think is fantastic. We hope to even develop more as time goes on.