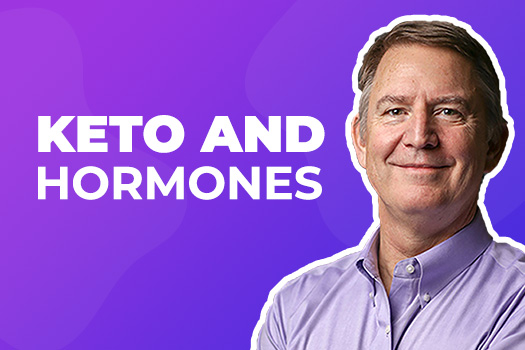 It has been put out there that a strict keto diet can affect cortisol levels, which in turn could affect weight loss. What are your thoughts on this?

What you eat and how you live affects hormone levels, no question. In fact, when I think of food and hormone levels, regardless of what diet you do, the most important hormone that gets changed by different types of food in my mind is insulin. Insulin is affected differently based on the carbohydrates that you eat. Sugars and starches raise the blood sugar, the blood sugar going up raises the insulin, and then insulin elevation has many different downstream effects, including affecting the other types of hormones, like reproductive hormones, causing insulin resistance, and the adrenals, where the cortisol comes from.

For the 20 years now that I’ve been studying and using low-carb and keto diets, I’ve heard lots of unfounded things that are said about it. It’s almost like there’s a prejudice that “everyone knows” it’s bad. They’re prejudging the diet. In my experience, the stress levels and cortisol levels actually get better on a low-carb keto diet as someone’s losing weight. The context is important here. If someone’s using a keto diet for losing weight, I don’t worry about anything other than lowering the insulin level, the weight loss, and diabetes. Cortisol is a secondary issue. If you are doing a keto diet and you’re not losing weight, stress levels from other parts of your life can affect cortisol. I don’t think diet is the biggest factor there. In general, 99 percent of the time, keto and low-carb fixes these other things over time.

Do you find that the women who visit your clinic seem to be more affected by hormonal changes due to the diet than men?

Sure. There’s the hormone cycling that women have, unless they have a condition like polycystic ovary syndrome (PCOS). In general on a keto low-carb diet you’re taking away the carbohydrates. Carbohydrates cause the insulin to go up, which leads to insulin resistance over time, because there’s too much insulin around. This can affect the reproductive hormones and may in some people cause the menstrual cycles to go away (or become irregular). So, a common cause of infertility is PCOS, which normalizes quite quickly on a low-carb diet, even without weight loss. The carbohydrates signal the blood sugar, the blood sugar signals the insulin, insulin causes insulin resistance, and that is the root cause for many of these cortisol, estrogen, and menstrual cycle fertility issues. I really like looking at root causes, not giving pills and products and vitamin supplements to make you think you’re fixing something when you’re really just managing it.

Have you noticed any changes in estrogen or thyroid hormones in patients following the keto diet?

The big picture view is that the levels of hormones and even ketone and glucose levels (which aren’t hormones, but they’re influenced by hormones) may actually be different from the normal range. You might measure a thyroid level, for example, and it might be outside of the ‘normal range’. The ‘normal range’ is determined by those who eat carbohydrates, so all of our Western medicine ‘normal ranges’ are determined by the people who get checked, most of whom eat carbohydrates. I’ve seen this written about extensively by folks who don’t take care of patients. They’re just talking about the biochemistry. You might have an “abnormal “thyroid level, but your thyroid function is normal (meaning that you feel fine). We don’t treat a number – a thyroid number or an estrogen number. It’s the function of that hormone that you want to be sure is either abnormal or not. Checking a level can clue you in, but it’s really about whether the hormone is working adequately or not – how someone feels.

In my world I do the measurement of thyroid all the time. You want to make sure you’re looking at not only the TSH, which is the stimulating hormone, but also the actual hormones themselves – the T3 and T4. It’s important to do that, because if someone comes to me and they’re 100 pounds too heavy, they may feel tired and have no energy, which could be a symptom of low thyroid levels. I have to admit that just about all the time the thyroid level is normal and I don’t use thyroid replacement. All I do is change the food and everything gets better.

So, the actual number that you see might not fall into the normal range of the test that you’ve received, because that “normal range” is from people who eat carbohydrates. An example of that is on a keto diet, where your ketone level is a little higher, beta hydroxybutyrate. If you checked it and it falls outside the normal range, that would be because those who eat carbohydrates don’t have ketones or beta-hydroxybutyrate in their blood. That causes confusion for someone who has type 1 diabetes, because in the past if you were to eat carbohydrates and you had ketones, then you would worry about ketoacidosis. If someone feels well while they’re doing a keto diet, even with type 1 diabetes and taking insulin, you don’t worry about that (a low level of nutritional ketosis with normal blood pH). It’s a very charged subject, because for type 1s you fear ketoacidosis (very high ketone levels with the blood becoming acidic), which can be life-threatening. People come to me with reams and reams of data and numbers and tests and you can send away for hundreds of tests, but I don’t really put a whole lot of value on treating those individual things, because treating the root cause has all of these downstream effects and improvements in those things.

Natalie asks: “If I am menopausal, should I be doing strict keto? I’m overweight and have type 2 diabetes.”

I think keto is good for anyone as long as you’re not consuming products and oils and things like that. My version of keto – that I’ve studied and used clinically for 20 years now – does not include these new products and pills. I prefer and recommend teaching using real foods. Eating real foods is a healthy thing to do. We don’t need to eat carbohydrates. It’s actually not an essential nutrient, which is the term for something you must eat because your body can’t produce it. Just eating proteins and fats is a healthy thing to do even if you’re menopausal or perimenopausal. Insulin resistance makes things harder for weight loss. To make something like this work you need to keep the calories or the carbs really low. You may find, if you’re perimenopausal or postmenopausal, that you have to keep the carbs really low. We use a 20 gram per day threshold, because it will work for just about everyone. (20 grams total carbs, not net carbs).

I’ve seen some people get distracted by all the keto products out there, but I prefer real foods. I’ve seen this work in women who are menopausal where other things didn’t work. Again, my clinic is full of people who’ve tried just about every other sort of method and it just defies sensibility. I’ve had people go for weight loss surgery twice and I asked them, “Have you ever tried a low-carb keto diet?” and they say no. We’ve come through a time when keto was thought to be something bad to do. The mindset of many doctors was that it’s safer to do weight loss surgery than to do a low-carb diet, which is crazy! It’s much safer to do a low-carb keto diet than to have bariatric surgery. That should be obvious.

A lot of people will come to this for the first time when they’re post-menopausal, which is fine, it’ll still work. In my clinic I use the low-carb keto diet as the first line treatment by default. I’ll use it alongside other approaches if necessary, but just about everyone in my clinic does really well on a low-carb keto diet, because I keep the carb grams really low at first.

Ben asks: “I want to start keto but I am worried about my testosterone levels. Will they be affected again?

The keto diet, low-carb, or carb-cycling has been used in the body-building world for a long time. These folks are very concerned about testosterone. In my experience, testosterone gets better just by changing the food, cutting the carbs out. If you have weight to lose, however you do it improves the testosterone level. It turns out that our fat cells are metabolically active. They don’t just store fat; they actually secrete hormones and chemicals. There’s a saying in the obesity world that the extra fat makes men more like women and women more like men, because the enzyme in the fat changes the testosterone to estrogen and estrogen to testosterone. All of these things normalize when you lose the weight itself. Doing a keto diet is fine. I never prescribe testosterone shots. I know a lot of doctors will do that before you lose weight. I just reassure you that I’ll help you lose the weight first and then we’ll see after that if you need to have testosterone replacement.

Betsy asks: “I am estrogen dominant. I’ve heard that eating a high-fat diet or eating higher fat affects estrogen. Is this true, and should I be worried?”

I don’t worry about that when you’re eating high fat and low-carb. That’s an important distinction. A lot of the research you’re going to hear is based on higher fat diets when people are eating carbohydrates at the same time. The reason this is important is that the metabolism totally changes when you’re eating high-fat and low-carb or keto. When your body starts burning its own fat, hormonal changes are favorable. While I haven’t seen a study specifically about estrogen dominance, I don’t worry about that. A lot of cancer patients are taught by default that you should do a low-fat diet, but there’s no evidence for that. One of the biggest studies ever, The Women’s Health Initiative, used a low-fat diet for cancer prevention and it didn’t work. This was published over 10 years ago. What you want to do with cancer, is you want to keep the insulin level down. You can do it in lots of ways. Using a low-carb keto diet does that as well.

Tara asks: “I’m on medication for thyroid. Would these need to be monitored? Do you think this would be a problem?”

As a clinical physician, obesity medicine, keto specialist, I have the luxury of checking these values, checking lab blood tests when people come to me. I do it as a safety precaution, because I’m using this in lots of different types of people with a host of medical issues. I’ll monitor what would typically be monitored. Thyroid is not a major issue if you’re on a dose that’s stable (i.e. you don’t have to have it adjusted frequently). If you’re getting it monitored every year or six months, that’s probably sufficient. If you felt like it was getting abnormal, you would contact your physician about it.

To be safe, I would say have your physician monitor that. Having seen so many people do this without me, without physician monitoring, or anyone monitoring it, there is a safety tolerability threshold that’s pretty big. You could be on medication like thyroid and change the diet and probably be just fine, but because I’m taking responsibility for someone’s health, I will monitor those things. I have to admit, I don’t really change the thyroid much. I wouldn’t worry about starting a keto diet if you’re on thyroid medicine, but I would have it monitored. That’s the best thing.