How to test cholesterol – Adapt Your Life® Academy 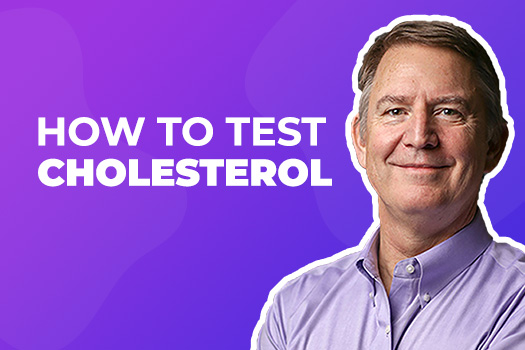 How to test cholesterol

What is the correct term for a cholesterol test?

There are many different terms and names, which is why it’s so confusing to people. When you go to your doctor and they check a cholesterol level, really what they do is they order a test called a lipid profile. Lipid means a fatty substance; cholesterol is a type of lipid.

When you look at the laboratory test that’s on your panel, it brings in the language of total cholesterol, LDL, HDL, triglyceride, and non-HDL – these are all terms that describe the particles in the blood and the amount of cholesterol on these different particles in the blood. Suffice to say that the way to measure cholesterol level, knowing that it’s more complicated than just the cholesterol, is to get a fasting blood sample at a doctor’s office (or now, in some areas you can get a blood test done at a lab company at a retail mall). It should be done after fasting overnight when you haven’t eaten over a 12-hour period, so that the meal doesn’t interfere with the components of the bloodstream.

Why are there different tests within this lipid panel?

The LDL particles carry around a lot of cholesterol. It was figured out that the HDL and LDL do different things in the blood. The higher the LDL was, the more likely you were to have a stroke or a heart attack. The higher the HDL was, you were less likely to have a heart attack and a stroke. That’s where the terms ‘good cholesterol’ and ‘bad cholesterol’ came about. Even then, that’s not enough to explain everything, because there will be people with high LDL who don’t get heart attacks or strokes and there are people with low HDL who do. As you get ever more into it, it gets ever more complicated.

Total cholesterol isn’t enough to explain what happens with people over time in terms of heart disease. You have other contributing sub-components.

What is the total cholesterol?

Do you get different types of LDLs and HDLs?

The whole cholesterol story got even more complicated, because when people were looking at LDL and heart disease, some people with high LDLs didn’t have heart disease. It turned out they had a certain type of LDL, which is a larger particle. The people who had mostly the small LDL particles had greater risk for heart disease.

There’s a good LDL and a bad LDL. The same goes for HDL; there’s a good HDL and a bad HDL. You can get these measured. It’s a simple test, but most doctors don’t do it automatically. This test is called advanced lipid testing or lipoprotein testing. Again, it’s a fasting blood test. The doctor has to specially order it to look at the LDL particle number and particle size. The actual term is an NMR lipoprofile (nuclear magnetic resonance) or a VAP (Vertical Auto Profile). Just asking for the LDL particle and size will help the doctor clue in to what test to order.

Can you tell us about the carotid artery test?

The blood tests themselves are what we call “predictors.” They don’t tell you whether you have a disease or not. This is often confusing, because a doctor might assume that you have a disease when we’re just looking at the blood test. If the arteries are the road and the cars are the lipoproteins, measuring the cars on the road doesn’t tell you how many potholes there are in the road—the potholes on the road being the actual disease of atherosclerosis, itself.

You can measure the arteries directly. We’re trying to prevent the disease on the arteries with these blood tests and one way to do that is with an ultrasound, which is non-invasive. The ultrasound can check the neck artery, called the carotid artery, and the major artery of the belly, called the aorta. These tests are done all over and sometimes outside the medical system. You can know whether you actually have atherosclerosis or not by getting these tests. The blood measurement of the lipids won’t tell you whether you have the disease or not; it’s just a predictor. I highly recommend people who are at high risk or worried about whether they have the atherosclerotic disease or not to get these ultrasound measurements. It’s simple, easy, and it’s risk-free. While it’s not perfect, it’s better than just measuring the blood.

Some doctors call for an ultrasensitive CRP, which is different from a regular CRP and is specific to cardiovascular disease, is that correct?

Yes. Thinking about what causes atherosclerotic disease, which is the arterial disease that leads to heart attacks and strokes, we consider that it’s not just cholesterol and it’s not just diet that causes this. It’s inflammation that sets the stage for the body to have damage on the arteries. The body comes in and tries to clean it up with inflammatory cells, so the CRP test (C-reactive protein) is a way to look for inflammation in the body. It’s a related thing, but it’s not checking cholesterol at all; it’s checking for inflammation.

What’s fascinating is that chronic infections (even including oral disease, like periodontal disease) can cause increased inflammation which can cause heart disease and arterial disease in different places. Anything that leads to inflammation can lead to atherosclerotic disease. There’s more than just cholesterol when it comes to heart disease and stroke prevention and it’s important to know that, because the doctors often obsessively focus on the cholesterol.