How to decipher cholesterol tests – Adapt Your Life® Academy 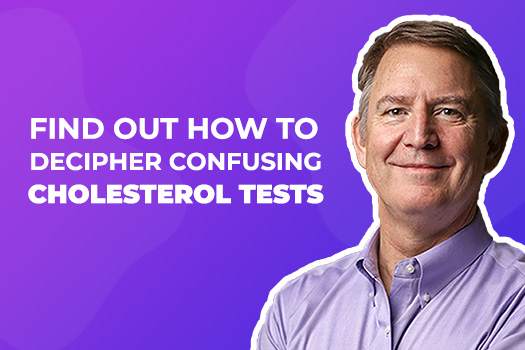 How to decipher cholesterol tests

Total cholesterol is checked by testing LDL, HDL, and triglyceride levels. Can you unpack for us the facts of why we test these and how to interpret the results?

Sure. It’s important to test a fasting sample, meaning one that’s checked after not eating for 12 hours or so (and not drinking anything but water), because the food that you eat can change these values and the prediction of heart disease and stroke outcomes. When you take a fasting level like a total cholesterol – LDL and HDL, and triglyceride – you can think of them in terms of being on the good side and the bad side, “bad” being a higher number, which means a higher risk. LDL cholesterol (the cholesterol in the LDL particle) and the triglyceride level would be the ones that present risk. Total cholesterol, LDL, and triglyceride are the ones where the higher they are in the blood, the more risk you’ll have down the road for having a problem.

HDL cholesterol is on the other side of the balance sheet. It’s a good, protective factor. You would never want to just look at a total cholesterol level without knowing the HDL cholesterol. It has always been more convincing to me to look at ratios – taking the total cholesterol divided by the HDL for example. You’re balancing one of the things that confers risk with one of the things that protects you – the HDL. Looking at a total cholesterol-to-HDL, or an LDL-to-HDL ratio, gives you a balance between the total cholesterol (the bad one) and the HDL (the good one), LDL being the bad one, HDL being the good one. Even the triglyceride divided by the HDL or the triglyceride-to-HDL ratio gives you a balance between the factor that confers risk and the factor that’s protective (the HDL).

The factors that confer risk are the total cholesterol, LDL, and the triglyceride, and the factor in the blood that protects you is the HDL cholesterol.

To reiterate, it is important to not just do one test, but look at the entire lipid profile to better understand your risk?

Yes, and I have to be honest, a lot of doctors don’t take HDL into consideration. I’ll see many of my patients being fear-mongered and even bullied into taking medicine or making a change based on just one number, without addressing the other numbers. It’s common for me to say, “Well, yes, that LDL or total cholesterol is a little high, but look at how high your HDL cholesterol is.” In lifestyle approaches that include more fat, HDL goes up, which is protective.

The old way is to look at the total cholesterol and LDL alone. In the history of checking cholesterol, there’s always been that ratio or the total cholesterol divided by the HDL, the LDL divided by the HDL, but it was just harder to roll that out into guidelines and simplify it. A lot of doctors just look at that LDL number. They’ll say, ”Look, that LDL is up a little bit, but your HDL is 90!” And in fact, on the lipid panel it’ll say that an HDL over 50 is protective. Half of the whole cholesterol story has been ignored.

Is it preferable to have your HDL as high as possible and your triglyceride as low as possible?

There’s been an evolution, a paradigm shift of understanding cholesterol in the blood. The old way was just looking at total cholesterol and LDL. It’s like using an old-fashioned flip phone where looking at the triglyceride and HDL ratio is like using a smartphone – it’s more advanced and can do much more. Even today when you go to one of these calculators online to assess your risk, LDL isn’t even one of the things that’s asked for; it’s the total cholesterol and the HDL. A lot of doctors, sadly, are still focusing on the old way.

Can you suggest a tool that people can use to see their risk profile?

One of them is CV Risk Calculator – CV meaning cardiovascular disease. Another one that I use a lot is the Mayo Clinic Statin Decision Aid. The aid is designed for a doctor to use to go over with a patient, because it talks about the risk – the number of people out of 100 who will be at risk and how treatment would affect that risk. It’s not immediately obvious to people how to understand that, but if you’re a quick starter and can figure those things out, I highly recommend these tools, because they do keep the HDL in that formula for you. Of course, it assumes lots of other things, like it assumes you’re eating a Standard American Diet.

People who use low-carb, high-fat diets can have higher LDLs and higher total cholesterol and I reassure people about that, because the HDL goes up. In these cardiovascular tools, they’re assuming that you’re eating a regular American (higher carb) diet, because that’s where the tool is derived from. If you are following a low-carb diet and you’re doing it for a long time, I would recommend that you do the advanced testing of the arteries directly, because in some cases the blood tests are way out of the bounds of what has been seen before. There’s a group – the “Lean Mass Hyper-responders” – where if you have a really high LDL level, they’re studying themselves; you can get involved in a study where they fly you out to L.A. to get a CT angiogram of the heart. It’s not a coronary score. Dave Feldman, who is the owner of cholesterolcode.com, also has a website called citizensciencefoundation.org and you can see there if you qualify for being involved in this study. I think you have to have an LDL over 250 mg/dl. You can be involved in research to advance the understanding of this kind of cholesterol phenomenon among people who don’t eat carbohydrates or who follow a low-carb or keto diet.

How important is a low triglyceride level in the blood?

It’s extremely important. It’s been known for a long time. There are some studies going back to the 1980s showing that you could reduce recurrent heart attacks by lowering the triglyceride level with drugs. The story of cholesterol and its treatment is a drug story in the medical world. Because there were no drugs that worked really well and were widespread to treat the triglyceride, it now doesn’t get quite as much widespread attention. There are some specialty lipid or cholesterol clinics where doctors take triglyceride very seriously. If you’re a lipidologist you take advanced testing and training to learn how to manage all of the blood components, you’ll take triglyceride seriously. The general doctor has only learned about LDL. You want your triglyceride to be very low. It turns out that the particle that carries triglyceride in the blood (the VLDL) is what leads to the small LDL in the blood. Triglyceride and arterial damage is directly related, because of the particle that it’s carried on. The VLDLs lead to the small LDLs in the bloodstream. That’s the “bad” LDL – there’s a good and a bad LDL; the small LDL is the bad one.

People who follow a low-carb or keto diet tend to have a very low triglyceride level, correct?

Yes. People say it’s counterintuitive—that you eat more fat and the fat level in the blood goes down. It’s because you’re burning it. You may be eating more fat, but you’re burning more fat as well, so your level in the blood goes down, which makes sense. It’s not counterintuitive unless you were taught in a different way. Higher fat diets do two things for the blood that are very good in the cholesterol world: higher fat diets raise the HDL (the good cholesterol), and they lower the triglyceride level.

What levels would you be looking for in the carotid artery test?

Ideally, there would be no evidence of any disease. If you’re young and you don’t have any disease, there should be ‘zero blockage’. These tests usually come back with a semi-quantitative or relative scale. Usually it’s none, mild, moderate, or severe; you don’t get an actual number. If you’re in your 60s, 70s, 80s, and you’ve been living in America and you’ve been eating an American (high-carb) diet, it’s likely that you’re going to have some disease. If it turns out your family history never had any heart disease in it at all or there were no strokes, then you may never develop disease, even if you’re living in the U.S.

Then you wouldn’t want to worry about a blood test if you didn’t even have the disease to begin with. If you’re 70 years old and you’ve eaten a moderately bad diet, like an American diet, and you have no disease, don’t start having a doctor introduce you to worry about a disease that you don’t have yet. The medical world has oversold the idea that everyone’s going to get heart disease and everyone’s going to get atherosclerosis. It’s highly likely you will if you eat a Standard American Diet, but if you haven’t been following that, you don’t have to have someone else make that assumption for you.