How important is fasting? – Adapt Your Life Academy 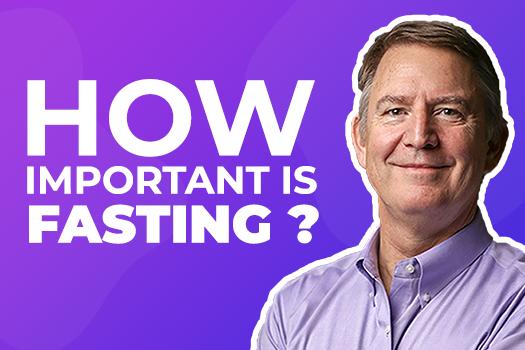 How Important Is Fasting?

Help us define what your interpretation of what fasting actually is.

It’s important to know that there are a lot of different definitions of fasting. You ask one expert, you’ll hear one definition; you ask another expert, you’ll hear another definition. Scientifically, “fasting” means you’re burning fat or you’re in a fat-burning state, meaning ketosis. So, I think this is a good thing. However, fasting in the common world that I hear people talking about is just not eating. Not eating for a long period of time, when you take that to the extreme, is not a healthy thing to do. Somewhere in the middle is where you want to be – where you’re not eating so much, but you’re in a fat-burning state of fasting.

The first thing you want to do is take just a little time to learn just what this person is talking about when you’re talking about fasting and intermittent fasting, which means not totally fasting, you’re eating something every day. Then, what are you supposed to eat? I think that’s the most important thing that people miss out on. I hear people talking about the hours of the day and dropping breakfast, which is fine, but it’s more important to talk about what you’re eating than what you’re not eating.

You have always practiced ‘Eat when you’re hungry; stop when you’re full’. You are also an advocate of fasting to the point of hunger, correct?

We’ve come through a time period where food, for most people, is just so plentiful that we’ve been eating too much. To say you don’t need to eat too much – it’s absurd that I have to tell people it’s okay not to have three meals a day. ‘But, what about breakfast, it’s the most important meal of the day?’ – no. I want people to eat high-quality, great food. Keto is a way to do that. If you’re not hungry, that is a signal that your body is satisfied. You wouldn’t go to the gas station three to fives times a day if your gas tank was full. If someone is trying to solve an obesity problem, basically you have too much energy on your body. It’s stored as fat. You don’t want to consume more energy when you’re trying to get energy off your body.

I think fasting or intermittent fasting in general is a great concept, because it just tells people they don’t have to eat so darn much!

Let’s break this down a little further. When somebody is on a keto diet, they are fat-adapted – in other words, they are using an alternative form of fuel for their energy. (Fat, rather than glucose.) What actually happens, correct me if I’m wrong, is that their body finds the nutrition it needs by using the fat stores on their body, so it’s not actually starving itself at all. It’s feeding off the ‘pantry on board’ – their own body fat?

Right. A common thing to keep in mind is that you’re going to burn what you eat for energy. If you eat sugar or drink sugar and starches (which get turned into sugar), you’re going to be burning sugar in your body, not fat. And if you’re trying to lose the fat off your body, which is the treatment of obesity or overweight, which most people do a keto diet for, the fact that you’re not hungry on a keto diet, means that you’re accessing your body fat stores appropriately.

In my mind, things were messed up before – why is someone still hungry if they could live for six months with the fat on their body? That’s how I got into this, by asking ‘Why is this happening?’ One of the reasons is, when you eat and drink carbs, you have to burn the sugars and starches. And that means you can’t burn your body fat. It’s like an accelerator and brake in a car: if you’re a fat burner, that’s the accelerator, you want that. Every time you eat sugar or starch, you’re putting the brake on the fat burning. Here’s where ketosis comes into it, and it’s known as a keto diet. Because you’re a fat burner, there are molecules you can measure called ketones – those go up a little more than if you were not on a keto diet. Because you can measure them in the urine, the blood, the breath, it’s called a keto diet. But really, it’s a fat burning diet – if you’re trying to lose weight, you’re burning the fat off your body. Not to worry if you’re lean – if you’re not trying to lose weight, your body will just burn the fat that you’re eating. So, you won’t whittle away into nothing! Animals that are carb-avoiding, like carnivores, are basically doing keto diets and they don’t whittle away to nothing. When they’re hungry, they eat.

This was all worked out in my early career, that if you just took the carbs away, and you put people in a research ward, people will eat the protein they need. The fat comes with the protein if you’re eating real foods like meat, poultry, shellfish, seafood, and eggs, so it doesn’t have to be difficult. Fasting comes in when you’re not hungry – don’t eat. Most people end up eating only once or twice a day, automatically, from within, just because they’re not hungry. My teaching doesn’t say, ‘Power through 18 hours, if you’re hungry, just don’t eat, because you’re intermittent fasting,’ – no! I want to do something as healthy as possible for people and treat as many people as I can. When you’re hungry, have something, but just a little bit. What happens over time is that hunger fades away – we say it “normalizes.” You shouldn’t be hungry three times a day with two snacks. This just becomes inconvenient. So, fasting is okay, but I first want you to understand that it has to be great food that you’re having, and if you’re experiencing a lot of hunger, then you’re either not doing it right or it’s not right for you.

In the context of fasting, what sort of liquids should one be having if you are wanting to try intermittent fasting or you are skipping certain meals?

Here’s where the balance and individual customizing or making adjustments for people comes in. It wasn’t long ago when all there was was water. Alcohols came about to keep water clean – when you couldn’t drink water, you purified it. In order to keep people happy and satisfied as they are transitioning, I think any kind of beverage that doesn’t have sugar in it is okay. Oils, and I see people adding butter, coconut oil, MCT oil (medium chain triglyceride oil) – these things overly complicate the idea of fat burning and I want the ketones to come from your body, not from what you eat or drink.

In terms of drinks, there is a wide array of things you can have. In my approach, I think it’s okay to have sweet things – they just can’t be sweetened with sugar. So, yes, ideally water or water with some kind of citrus added, if you like that, would be great. Coffee and tea have no carbs in them unless you add sugar to them – in my experience, people can be very successful drinking coffee and tea, even with cream and (artificial) sweeteners. That’s where I do things that are practical, with advice that is not dogmatic, like, ‘No, you can’t have caffeine’, or ‘You can’t have artificial sweeteners,’ because I want this to be used by as many people as possible and in my experience, these things are not a big factor. They are not a big barrier to having it work.

I would say this is expert advice now, because there are not a whole lot of studies on long-term fasting. You can think about the history and religions of fasting, but I want more than that. Doctors used to suggest fasts to people all the time. This was before my time, in the mid-1900’s. The best weight loss came from getting people to not eat anything. That’s not the healthiest way to do it. What we are concerned about with long-term fasting (which I would say is more than a day or two, three days) – I am not concerned unless you have other medical problems and you’re on medications, I am not concerned if you go a day or two without eating.

I’ve seen people – sick people in the hospital – not eat for a week or two and the body is going to figure it out. But again, I want it to be the healthiest way. That’s where the concerns come in about long-term fasting or doing fasting without regard to having great nutrition. My teaching is that you should consume protein every day, and if you eat animal proteins, you’re going to get fats with the protein. I don’t worry about you getting enough fats. The concern is not getting enough protein, and that your body will start burning its own protein, which is stored in muscle for the most part, so the loss of muscle mass is the concern on long-term fasting. I know there are a lot of pundits (experts), who say ‘Don’t worry about that!’, and yes, you can measure your own muscle mass with techniques that doctors have, which would be a great tool for making sure you’re not losing muscle mass. Your strength is a good indicator, but not perfect. Until the research is worked out about how low you can go on protein without harming the muscle, I am still reluctant to say it’s okay to go more than a day or two without eating.

The other extreme – we know that if someone gets weight loss surgery, which is my world of obesity treatment – I’m president of the Obesity Medicine Association – the ugly truth about weight loss surgery is that weight loss is so fast and so dramatic, that just about everyone loses muscle mass, and in some cases, a lot. So, you might notice someone who’s had weight loss surgery, and they don’t look healthy. The weight loss can be too fast. That’s the concern about long-term fasting. Intermittent fasting – eating one meal, two meals a day when you’re not hungry, because you’re eating great foods on a keto diet – that’s what I have the most experience with and I think the science supports that the most.

Beth says, ‘I eat dinner at around 6pm and the next meal is lunch the following day. Would you consider this intermittent fasting?’

Yes. When I teach someone and they say they’re doing “intermittent fasting,” because they’re doing 18-6 or 12-12 (not eating for 18 hours and consuming your meals within a 6-hour window, or not eating for 12 hours and eating your meals within a 12-hour window) – you can basically do the different types of fasting and if you want to call it that, great. But, really, what’s happening is that you’re not eating because you’re working off your “on-board” pantry – your fat store – and you’re experiencing an appetite reduction automatically.

While you are specifically not eating the nutritional value of food, your body is still finding the food within your body.

Derek says, ‘I have been using intermittent fasting as part of my lifestyle – do you think this is healthy?’

My first question is, ‘What are you eating?’ I’ll cut to the chase, go to the core and say, ‘Write down what you’re eating and drinking for me for three days or just tell me over the phone what you’re eating or drinking.’ The nutrition has to be optimal first before I’ll even say that intermittent fasting is okay. Imagine it’s the college diet, where you just have sugar once a day – this is not healthy. We want this to be as healthy as possible.