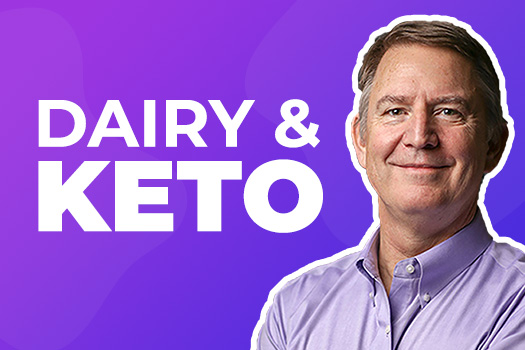 This blog is an adaptation of Dr Westman’s video on ‘The Truth about Dairy and Keto’ which we have included at the bottom of this article.

Most people think that keto and dairy go hand-in-hand. That isn’t necessarily the case, is it?

There is a lot of confusion about dairy and hopefully we can shed some light upon that.

Dairy is anything that has milk, coming from different types of animals – that includes cheese and cream, not eggs, that’s a different subject. The proteins and lactose in milk is where people might have sensitivities or intolerances. A lot of people come to me saying, ‘I can’t have dairy,’ and I teach them the low-carb keto approach, which talks about toal carb reduction, allowing them to eat things they couldn’t eat before without the same intolerances they thought they had before. So, you might think you can’t have dairy, but when you do the Adapt Program, you actually can.

Some dairy products are higher in carbs than others. Can you give us some examples of the different types of high-carb dairies?

Milk itself comes with a combination of fats, proteins, and carbs, with lactose being one of the most prominent sugars. When you milk an animal, the cream rises to the top, because the fats are a little less heavy, less dense. In the old days, what you would do was scrape the cream off the top – the cream of the crop – from which you can make ice cream or simply just drink the cream. What’s left in skim milk (the milk that you’ve skimmed the fat off of), is sugar, the lactose. So, we’ve all been taught that skim milk is the best, because it has less fat, but on a low carb keto diet, skim milk is the worst, because that’s where all the lactose, the sugar is. Cream is in. (Of course, you don’t want to have copious amounts, because the sugar is out.) We say, no sugar. Even one percent, two percent milk still has lots of sugar.

There are all these other types of milks now – almond milk, cashew milk, nut milks – and you have to look at the carbs in there as well. We never studied the unsweetened nut milks, but if you look on the labels, they are low in carbs. I have had lots of people use those unsweetened nut milks and they seem to do fine, because we look at the total carbs and I teach them to watch the total carbs. But, we didn’t use those in our studies, so I can’t guarantee that using those products is okay.

A lot of people like milk, so even if you had a very small amount of real milk, watching the total carbs – that would be fine.

Why are dairies like cheese and heavy cream limited in your program?

The processing of the milk into cheese and taking the cream from the milk means that it’s very low in sugar. This is where I’ve seen some people say, ‘I can’t have dairy, but I’m having cheese now and I tolerate it just fine.’ That is because there’s not much lactose in cheese or cream, so if you’re lactose intolerant and stay away from dairy, it’s actually the milk that you want to stay away from. The cream and cheese is good in terms of just the carbs or in terms of avoiding the intolerance of lactose.

The problem with cream and cheese, when you’re teaching a keto diet to people who want to lose weight, is that there’s a lot of energy density, a lot of calories in cream and cheese. So, our program, which is clinically-based and which we studied over the last 15 years, limits cream and cheese, because there is an abundance of energy. If you’re trying to lose fat weight off your body, you don’t want to be eating and drinking lots of fats like cream and cheese on the keto diet.

Is there a limit on butter?

Yes. Butter is another example of a very low-carb, but high-calorie food. Oils and butters are going to have a limit on them – you can still use them for typical purposes like in a frying pan with your eggs. Butter, cream, cheese, mayonnaise, do have a limit, because in practice, if you don’t limit those things, you are not going to be drawing on your fat stores, which is what you are trying to do on a keto diet when you are trying to lose fat weight.

It has been mentioned that dairy can cause cravings – is this true?

This is an individual thing. You may find foods that cause cravings or that make you want to eat more of them, like nuts or nut milks. Any kind of food can do that. You want to just be careful if a food does make you want it and you can’t stop having it – you want to avoid those types of food.

One of the most common mistakes I see when people learn about keto on the internet is the idea that you can have as much cheese as you want. Cheese is very tasty and you get nice flavors and it’s hard to stop eating that. For a lot of people who read about keto on the internet, that probably is the most common reason they aren’t losing body fat – they are overconsuming cheese and cream (in coffee or tea). There’s a phenomenon out there where you add oils and butter to coffee to prop it up and that can raise ketone levels, but the more fats and oils you drink or eat, the less the fat is going to come off your body.

One person was having oil and butter in coffee and I calculated how many calories there were in there – I think it was something like three hundred calories. I then asked, ‘How many of those coffees are you having throughout the day?’ and it was five. So, five times three hundred… no wonder you’re not losing the fat weight off your body! You really want to be careful about the indiscriminate drinking and eating of foods that have lots of fats and oils in them.

The wonderful thing about a keto diet, when it’s working and you have learned how to do it right, is that the hunger goes away in just a day or two. It’s like giving a pill to someone to cut the hunger out, but you don’t need the pill. This is what I start with as an obesity specialist, I have lots of options I can prescribe – I can prescribe pills and programs that people purchase, but I start with the keto diet for everyone as a default, because if you learn it properly, you don’t need those pills and products that other people use from the get-go.

Do you have any experience with dairy causing skin conditions while on a keto diet?

I have become that doctor who I said I would never become – the one who says that any drug has a list of side-effects. I used to think, ‘Well, this is not on the list, so it can’t be’. With food it can be the same. If you eat something like dairy and repeatedly get a reaction, you may be sensitive to the proteins in it. Although, I have to say it’s not common. It may be common when someone is eating and drinking large amounts of milk, but if you do a properly formulated keto diet with real foods and you watch the total carbs, you’re not going to be getting much of the proteins, fats, or sugars that cause those kinds of reactions. If you limit the amount, you may find that you don’t have that same type of reaction.

If someone who is allergic to dairy goes on a keto diet, is it all right for them not to consume any dairy?