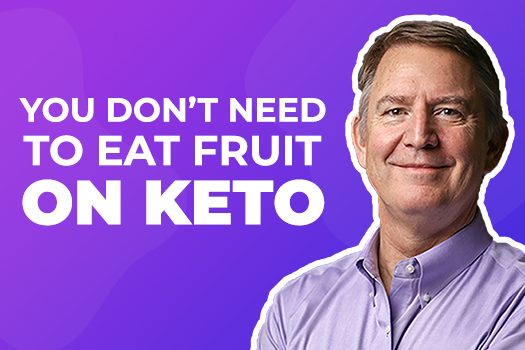 This blog is an adaptation of Dr Westman’s video on ‘Why You Don’t Need To Eat Fruit on a Keto Diet’, which we have included at the bottom of this article.

I came to visit you in your clinic about six years ago. One of the things that was very prominent in your examination room was a sign that said, ‘Fruit is nature’s candy’ – what do you mean by that?

That it should be limited, like candy. Fruit is just sugar with coating and maybe some antioxidants. In the method we teach, a simple way to do keto, fruit and berries are really just too sugary to have on this kind of program. ‘Fruit makes you fat,’ is another sign that I had for a while. We had to clean up the walls and now I have more of a list of foods to have and not to have in the office, so that we can use that as a teaching tool.

“Fruit is nature’s candy” is often an eye-opener to people who have been taught all their lives that they have to have fruit. I mean, why wouldn’t you think that when you see it on advertisements all the time? Commonly people say, ‘But, I thought it was healthy,’ and I say, ‘Well, let’s just explain and learn about the number of carbs in there and why you would want to restrict it.’ No fruit or berries. It works best that way.

We have always been taught, ‘Eat two or three fruits a day to keep the doctor at bay.’ If you break it down, our bodies don’t really understand the difference between fruit or sugar. It all gets broken down into glucose. What actually happens when we take a bite of an apple or eat some fruit?

Our brains and our bodies perceive things differently. The fruit doesn’t look exactly like sugar on the spoon, or like a potato, but it does get digested to glucose and fructose. (Sucrose is a disaccharide, so it has two sugars on it and fructose is one of them). So, if you’ve heard about fructose being bad – Dr. Robert Lustig at the University of California, San Francisco, has a mission to tell everyone about fructose. You may have seen his viral video some years ago with millions of views about fructose!

Fructose never occurs by itself in the environment. Even high-fructose corn syrup is really a combination of fructose and glucose. So, all of this gets digested, and starches will just be broken down to glucose, which gets absorbed into our bloodstream, comes up to the brain and gives the reward of dopamine at the brain’s reward center. That’s why people might feel like they can’t ever give up fruit. In fact, it’s such a good way to deliver sugar, that you might feel like you are addicted to it – addicted meaning you couldn’t think of living without it. ‘What will I do if I don’t have cantaloupe in the morning?!’ Well, actually you’ll be fine. There’s nothing in fruit that is not in other foods. That gets into marketing – we’ve heard, ‘Where would you get your vitamin C if you didn’t have fruit?’ Other foods have plenty of vitamin C for you.

The idea of food getting digested to glucose and fructose is not generally known. Because it tastes different, we don’t think of starches and sugars and fruits as the same thing, but to our body, it is the same thing.

The reading will go up, because a big part of that fruit you had will be digested to glucose. Glucose in the stomach goes into the blood and glucose raises the blood sugar. That type of sugar we call glucose. So, when we say ‘Check your blood sugar,’ we really mean your blood glucose. What’s interesting is that we’re not even measuring the fructose side of things, and fructose goes to the liver, which is one of the key factors in fatty liver disease. Fructose is found naturally in foods like fruit. I’ve seen well-intentioned doctors trying to dissect this down to the detail of precision when all you really need to know is that eating fruit raises blood sugar and we don’t want that.

There is something worse than eating fruit. That is taking fruit, putting it in a blender, and juicing it. What people are not aware of is that a lot of the fiber contains the sugar – when you juice it, the fiber breaks open and releases all the sugar. A lot of people have their orange juice in the morning and they think they are being healthy, when in fact, it’s a lot worse than eating fruit.

Yes. We should say that this is if your metabolism needs you to do a low-carb diet. There are some people who can tolerate that kind of ‘sugar bomb’, so to speak, especially if you’re young and you’re otherwise active. If you’re trying to do a keto diet, then juicing is worse than having the whole piece of fruit.

I was recently looking at other ways to give fruit – fruit plates or cheese plates. What some restaurants do, is they give a wafer thin slice of apple, for example (wafer thin meaning a very thin slice), so that you get the taste of the apple with the crunchiness, on some fat like cheese, but you would never have an entire piece of fruit at one of these fancier restaurants, because they want their clientele to stay skinny. It seems to me that at fancier restaurants, there is less food on the plate, more fat and less sugar, because these are the factors that are healthier. We gravitate towards those sorts of things, although it’s hard to resist orange juice in the morning if that’s what you’re accustomed to.

Some people have to go through a craving on the first day or two, but it’s remarkably quick. I’ve had people lament what they will do without fruit and then a week later they come back kind of embarrassed that they had such drama about something that was so easy to give up. If you never try giving it up, you won’t know.

What about the fiber in fruit?

That’s a whole other story – of fiber getting all this attention. When clinical research is done (meaning, in people), adding fiber to diets really hasn’t been found to be necessary. It hasn’t added any health benefits. When you really do the critically important studies, which are carefully controlled, fiber really hasn’t amounted to much as a medical treatment. You might have bowel movements eased and that can be important, but the fiber in fruit is just a distraction.

There is also fiber in a lot of the vegetables that you advocate on a keto diet.

When you are doing a well-formulated keto approach, you do get vegetables and leafy greens, which have fiber, so you don’t need fruit. If you’re still worried about fiber, you’re not taking my advice. You still do get fiber from leafy greens and non-starchy vegetables that are allowed on a keto diet. It’s not a zero-fiber diet. There are other ways to get things that are in fruit and berries other than having fruit and berries.

Is there any keto-friendly fruit?

Sure. It’s as easy to find out as searching online to see how sweet a fruit is. The sweeter the fruit, the more sugary it is. The more tart a fruit or berry is, the less sugar there will be in it. The joke is that you just want a very small amount of fruit – that’s another way to think of that. As long as you’re not having a trigger food that makes you face-plant into the whole thing of berries, a little bit of fruit will be okay. There are some products that measure out little bits of fruit, like in a yogurt cup, for example. Some people even use a berry or two to sweeten their vegetable smoothie. So, if you can’t give up the idea of having a smoothie – you like it, you bought the juicer – it’s okay to juice vegetables and maybe add a berry or two for the sweetness, because you don’t want to have honey or sugars like that. If someone is really having to fix diabetes and has hundreds of pounds to lose, I highly recommend that you just get the fruit and berries out of your life for a while, because it’s so easy to go back.

There’s usually a seasonal change in fruit availability which brings the nostalgia, ‘We always used to go pick strawberries with the family…’ But, fruit is nature’s candy, so you want to limit it. That’s my best advice, to just get it out for a while and go back to it eventually.

Grapefruit, when you don’t add sugar or sweetener to it, is very tart. You’ve probably noticed that there are grapefruit diets. Back in the day, half a grapefruit was part of the morning routine – with cottage cheese or some other low-carb breakfast. That’s because grapefruit is not sweet. It is larger, so you want to be careful again about the size of the fruit that you have. You also don’t have to have the serving size of the fruit every time – you can halve it or quarter it. I don’t know all the details, but the fruit today is much larger than a hundred years ago. Naturally found apples are very small, but we have, through genetic engineering, changed the size of fruit to be larger, fruitier, more sugary. A lot of people will limit the amount and not totally abstain from fruit, but just have a little bit.

What is your pro-tip for helping folks give up fruit?

I have found that fruit-flavored things will help quite a bit. We do allow for having non-sugary substitutes, like sugar-free jello, sugar-free gelatin, which come in many different fruit flavors. There are even fruit-flavored diet sodas. So, fruit flavoring is a way to give you the idea that you’re having fruit, but you’re not suffering the same metabolic effects of the fruit when you’re having something that is sugar-free. That’s one thing that gets a lot of people over this hurdle of getting off fruit.