The truth about acid reflux – Adapt Your Life® Academy 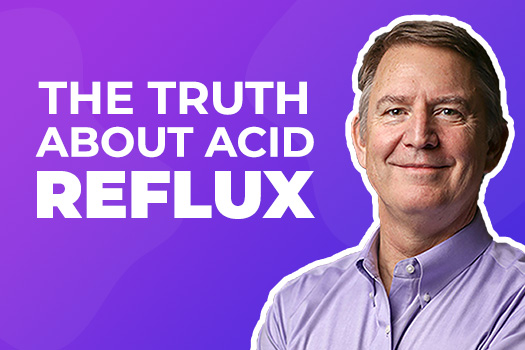 The truth about acid reflux

Acid reflux, heartburn, or ‘GERD’ (gastroesophageal reflux disease) is a very common condition that you see in your clinic. It affects about 20% of the population in the United States. Can you explain what acid reflux is?

Sure. It goes by many different names – heartburn, GERD, which stands for gastroesophageal reflux disease, thus “reflux” is short for GERD, and heartburn is a pretty good descriptor. There’s a burning sensation in the middle of the chest where a lot of people think the heart is (although it’s on the middle left side). It’s an uncomfortable burning sensation. If you’ve never felt it, it’s pretty characteristic. It’s uncomfortable, it might come up into the throat and typically it’ll happen after the spaghetti and meatballs or pizza, which you’re overconsuming. It goes away really fast when you have antacids, like Rolaids or Tums or Mylanta. Heartburn has always been associated with acid in the stomach, because when you take something that blocks acid (now we have pills that block acid production), the symptoms go away for most people.

This is not to be confused with true heart pain or heart discomfort and chest pain from the heart itself. This is usually not called a pain; it’s usually described as an uncomfortable feeling, as if someone’s sitting on your chest. In the medical world, we think of chest tightness as something that would raise a red flag. We would evaluate it differently. Heartburn itself is a burning sensation; I would be more concerned if you told me that you had chest tightness, so don’t confuse those things. As an internist who went through training and as a chief resident and then a fellow in an academic setting, we all know that there are people who misunderstand. They think it’s heartburn, but it’s really not. It’s the heart itself causing the pain. So if what you’re having is not going away with antacids or a keto diet or any of these other pills, that’s a whole other discussion that I would be more worried about. I just wanted to get that out there, because heartburn can go away. You’ll get to know what that is. That’s not life-threatening.

To your knowledge, what causes acid reflux?

The most common cause of acid reflux is too much stomach acid. You feel it at the top junction where the esophagus – the food pipe – comes into the stomach itself. If the acid brushes up against the esophagus, that gives the symptom. If the stomach acid gets into the esophagus, you feel that heartburn sensation. There’s an anatomical issue – hiatal hernia – where the esophagus and the stomach come together and it’s not normally tight. This can be a reason for heartburn where it’s not just the acid; it’s actually an anatomical or a physical reason why you might feel it. The only way to know that is to have a doctor do a test where you swallow something and it lights up the stomach area, or you swallow a tube and they look in to see if there’s that hiatal hernia or not. For most people, though, it’s just excess stomach acid.

If we go one step further back, what causes the excess stomach acid?

This is very interesting. The keto diet can fix heartburn, but you’re going to find that not many doctors know about this. It’s a funny story the way I learned about it. One of my study participants told me as we were doing a keto diet study, after one of the first visits back, that her heartburn was gone. I asked her to tell me more. We weren’t doing a study on heartburn; we were doing a study on weight loss. I told her to go and test this, so she tested the typical spaghetti and meatballs meal and had heartburn. Every time she told me what happened, I would tell her to go back and try it again with this, or without that. It turned out it wasn’t the meatball and the sauce that caused her heartburn – it was the spaghetti! It wasn’t the spiciness of the sauce; it was the bread!

Every time she had a combination of starch and sugar, the thing we always thought was the problem (people are advised not to have spicy foods if they have heartburn) wasn’t the cause at all. It was adding starch to the spicy food that caused the heartburn. As I started paying more attention, another person told me they didn’t have heartburn anymore either. We wrote a case series in the literature about these different people who didn’t have heartburn anymore after they started the diet. This was back when I was learning from Dr. Atkins and Jackie Eberstein. They had a clinic and I went to them and asked if they saw this and they said, “All the time!” Dr. Atkins said he put it in his books and sure enough, it’s in the Atkins books, in a big way.

This is one of the most reliable things that a low-carb or keto diet does: it gets rid of heartburn. As a young researcher trying to figure out how things work and why, we did a study on heartburn. The reason I can confidently say that the keto diet lowers stomach acid is that we have a paper published now. I pulled it up – it was published in 2006. In the study, we used pH probes – a little tube that you put down someone’s nose and throat, into the stomach, which measures stomach acidity all day long. It’s an advanced test that a gastroenterologist will do if they’re trying to figure out a complicated case of heartburn and acidity.

In our study, we put these pH probes in people who had refractory (difficult-to-treat) heartburn. They had excess acid. We put them on a keto diet and within only six days of the next measurement (after being on keto), the pH improved or became less acidic. The acidity in the stomach went down after six days, which correlated with the symptom improvement. So, the keto diet — in the way we tell people to do it — lowers stomach acidity and fixes heartburn symptoms by reducing the stomach acid.

Most people think of heartburn as benign. I have heard that it’s possible that if it goes untreated, that it can lead to a precancerous condition known as Barrett’s esophagus. Is this something people should worry about?

I think it’s a concern. It’s not common, but Barrett’s esophagus is thought to be from this irritation of stomach acid at the bottom of the esophagus, where the esophagus meets the stomach. The only way to know if you have that is if a doctor looks down and takes a sample or biopsy of it. People are given antacids as a routine treatment because most GI doctors don’t know that a keto diet fixes the acidity and the symptoms. If you have heartburn every now and then – once a month or every six months, or over the holidays when you’re indulging in foods you maybe normally don’t eat that often – then I don’t think it’s a big deal. But if you have recurring heartburn – day after day or every week – this is something that you want to take action on.

It’s not just growing older that makes you have heartburn, even though that might be something you saw in your parents, for example. It’s definitely diet related. Through the years since the paper we wrote in 2006, I’ve only seen one other study address a low-carb diet and heartburn. It may be that you can have higher carbs and have the heartburn go away. I recall this study defined a low-carb diet as up to about 50 to 100 grams of carbs a day, but they took away the starches. So, it may be more related to bread and pasta, the refined flour, than the actual grams of carbohydrates.

You have to understand that our method takes away gluten. It takes away the simple sugars, it lowers the total carbs so it takes away things like potatoes and pasta and rice. I really want to see more research here or have people tell me their own experience, because it may be that you don’t have to do a 20-gram diet to get that heartburn relief. It may be that you could be at a different phase, as we talk about in our book, End Your Carb Confusion. You may have resolution of heartburn even though you’re at a higher phase (where your carb intake is slightly higher). The study we did used the first phase (20 total grams of carbs per day or a truly ketogenic level of carbohydrates) and heartburn went away 100 percent. It’ll be interesting to see as people cut out the refined sugars and starches, you may have resolution of the heartburn even at higher carb levels.

Pretty much, but that excludes if someone has one of those anatomic abnormalities, a hiatal hernia being the most common thing – the out-pouching of the stomach. It’s not a hernia like in the groin area, which is the most common type. A hiatal hernia is a stomach and esophagus issue. But even if you have that, the heartburn symptoms may still be reduced because the acidity goes down with the low-carb keto diet.

How long does it typically take for someone who’s suffering from GERD or heartburn to experience relief once they’ve started your keto program?

Only a few days. If someone comes to me and they’re on a boatload of medicines, I don’t always cut them all out at the first visit. If they have other doctors they’ve trusted for years who have them on all these medicines, the art of doing this is that I don’t say, “Okay, stop all these.” I let people who are on medicines figure it out for themselves. If you’re on one of these medicines for weeks, it’s not a big deal. Health-wise, there’s very little toxicity to them. Some people don’t even notice that their heartburn is gone after a month. They didn’t even realize.

I’ll ask, “Are you still taking the medicine?” If they say yes, I’ll say, “Why don’t you wake up one day, skip the medicine and see if you get heartburn. If you do, then go back on the medicine.” This is called a trial to get off the medicine. Do a trial off the medicine and if the heartburn doesn’t come back, there you go! What’s fascinating is that it can happen very fast. Again, that study we did showed that in as little as six days, there was symptomatic improvement. When I look back, we didn’t have oodles and oodles of people in the study. I think we had five or six people, but this is a clinical signal of thousands of people who come in telling me they’re no longer needing their medication for heartburn or they no longer have the heartburn. It’s pretty amazing.