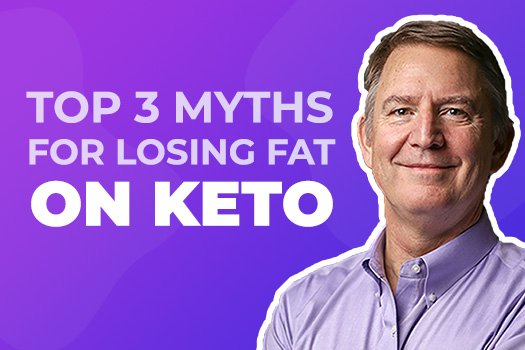 Why do you think that fat loss stalls on a keto diet is such an important topic?

I think it’s important to talk about losing fat on Keto and the dreaded fat loss stall, because a lot of people come into a ketogenic or low-carb diet thinking that weight loss is magical, or it’s effortless. They believe they’ve found the holy grail and all they have to do is cut back on their carbs and the weight is just going to fall off of them. For some people that’s true and it happens that way, but more often, weight will come off and then you hit a roadblock. You think you’re doing everything right and you’re doing what a lot of other people out there are telling you to do, but unfortunately, there are some people out there who are giving advice and information that may not be that helpful, depending on people’s situations. The food news is, most fat loss stalls are pretty easy to get over once you have the right information.

What is your number one myth relating to a fat loss stall on a keto diet?

It’s hard to narrow it down! The stumbling block that I see for most people is simply too much fat in the diet. People think of keto as a high-fat diet and they might be eating more fat than they were before, but the truth is, if you eat more fat than your body needs, you will not lose body fat. In fact, it’s possible to gain fat on keto if you eat enough fat. When you keep your carbohydrate intake really low, it allows your body to switch over from burning mostly glucose and carbs to burning mostly fat. So, great, now we’re burning fat, we definitely want that, but if you’re eating too much fat from your food, then your body has no need to tap into all its stored fat to use for fuel. That’s really all body fat is – it’s extra fuel and food to use when you’re not getting enough.

When people think that they have to hit some kind of “fat macro” or that they have to have a certain percentage of fat in their diet, that can definitely get in the way. We’re definitely not afraid of fat – we love to eat fat on keto, but you don’t have to go out of your way to add lots and lots of extra fat, especially if you don’t even want to. Some people are putting butter in their coffee or drowning everything in oil, because they think they’re supposed to; they don’t even really have a desire to do that, they just think that’s what keto is. Overdoing the fat is probably number one on the list.

Where did this misconception come from? Why are people thinking that they need to hit these fat macros?

I think it’s from a couple of different places. The first is that this is what they’re hearing from lots of other places out there; they’re being told to do this, so they think they’re following someone’s instructions. I think it’s also partly based in the origins of the ketogenic diet as a medical treatment versus as a weight loss strategy. The ketogenic diet was originally developed as a treatment for children with epilepsy. They very often do need much more fat than the average person and much lower carbs. The way you construct your keto or low-carb diet really needs to be a little bit different depending on your goal. If you’re trying to lose weight or reverse type 2 diabetes, it’s different from somebody with epilepsy or someone with some other severe medical condition that really needs a very targeted strategy. Also, the abbreviation “LCHF” has become very popular the last few years – low-carb, high-fat. People assume that the high fat is part of that, whereas when I was brand new to all this over 15 years ago, we all just called it “low-carb,” nobody called it low-carb, high-fat.

Is it possible that the high fat could be the fat that comes from our own body as opposed to nutritional fat that we eat?

As Dr. Westman calls it – your onboard pantry! What is your second big one to add to this topic?

The second one is too many carbs. Like I said, when I was new to this, we all called it low-carb. Keeping your carbs really low is what makes the diet a ketogenic diet. Ketones don’t come from eating lots and lots of fat or doing anything special; ketones come from keeping your carbohydrates really low. Just because you eat a lot of fat, that doesn’t mean you become what Dr. Westman calls a “ fat-burning machine.” You become a fat-burning machine when your body doesn’t have enough carbohydrates coming in, so it needs to shift over to burning something else for energy – it’s going to burn fat. When people are eating a little bit too much carbohydrate to make that happen in their own body, then they’re not going to get the results they want.

Everybody’s carbohydrate threshold differs. Some people can eat a fairly generous amount and still have a healthy metabolism and be burning fat; many others really need to keep things very strict. If you’re eating too many carbs, that’s a very easy thing to adjust to to start getting things going again.

Some people may be using the net carb method instead of the total carb method and inadvertently think they are limiting the carbs, but in fact they’re not.

Right. You said a very helpful word: “inadvertently.” Net carbs – for those who don’t know – is the total carbohydrate in a food minus the fiber and minus any sugar alcohols that are used to sweeten things, including maltitol, erythritol, xylitol, and some others. Sugar alcohols are not without any glycemic impact at all. They differ – there are a lot of different kinds of sugar alcohols. Many of them do have a substantial impact on blood sugar and insulin. If that’s happening, you’re not getting the metabolic effect you think you’re getting by keeping your carbs low.

Counting net carbs also sometimes goes hand-in-hand with people eating too much fat. I’ll give you one example. In the U.S., there are a lot of ice creams being advertised as ‘keto ice-cream’ or ‘keto-friendly’. When you look at one serving, it has maybe 20 or 30 grams of total carbs, maybe only 2 or 3 net carbs, but it’s loaded with these sugar alcohols that some people might be responding to. Not only that, but they’re very high in fat. The same would hold true for keto cookies and keto brownies – things that have a lot of coconut oil or almond flour, which are very high-fat items. You don’t realize what you’re doing to yourself. It’s like you said: it’s inadvertent. You think, “Oh, two net carbs; this is really low in carbs.” But you don’t realize the effect that those things are having.

What is your third and final biggest myth when it comes to fat loss on a keto diet?

I hate to say this one, believe me, but it goes hand-in-hand with fat and that’s calories. I hate the ‘c-word’; we all hate the ‘c-word’ on low-carb and keto diets, but calories do matter. You cannot eat an unlimited amount of food. Even if you’re in ketosis, even if you are burning fat, if you are taking in too much food energy, your body doesn’t have to turn to all this beautiful stored energy on your body. That can come from carbs, or fat, or alcohol, which is a biggie. Biochemically, it’s very hard to gain fat by eating more protein, but excess calories from anything can be an issue. I’ll borrow a line from Dr. Westman, and I’ve read it in other people’s books too: “Calories count, but that doesn’t mean you have to count them.” If you keep your carbs low enough, your appetite self-regulates. You’re just not as hungry anymore. You naturally eat less, so you end up eating fewer calories without having to force yourself to go hungry because you’ve reached your limit or something. Just simply overdoing the total amount of food, not honoring your hunger, and not paying attention to the fact that you aren’t as hungry is the problem.

Check out the full video about losing fat on Keto here.