Are you new to keto? – Adapt Your Life® Academy 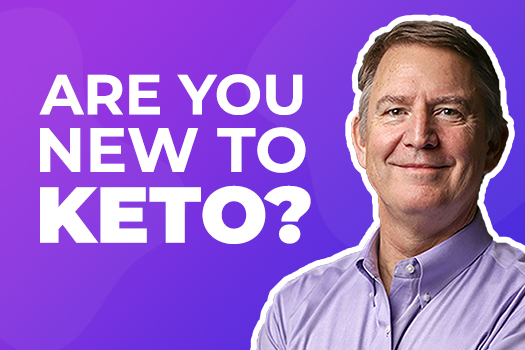 Are you new to keto?

How long have you been in your clinic treating obesity, type 2 diabetes, hypertension, and other conditions by using a ketogenic or ‘keto’ diet?

If you count the original research studies we did, then 24 years. We started the research in 1998 and then I opened the clinic at Duke University in 2006. Our clinic opened about 16 years ago.

Yes. I’m trained in internal medicine, which is the discipline in medicine that treats diabetes, high blood pressure, all these chronic medical problems. In the medical world we’re taught to use medications to treat these diseases. I became an obesity medicine specialist, which means you target the underlying or root cause of diabetes and high blood pressure. Using the low-carb or keto diet specifically, I practice better internal medicine than I could by using medications. By changing to a keto lifestyle you fix the diabetes, the high blood pressure, the heartburn, the arthritis – you don’t just “manage” them. It’s actually a great job to have! I created my own job, my own clinic, and we’ve been teaching other doctors how to do this for the last 10 years now.

What is a ketogenic diet?

It’s actually very simple. “Keto” may not be the best thing to keep in mind, although the name is very popular, because it might make you think you have to do something with keto products and all that. You really don’t. The most important thing to keep in mind is to keep the carbohydrates in the diet low. You can do it in a difficult way, you can do it in a simple way. I’ve been in a clinic in North Carolina where I treat people from all walks of life. If it’s not working, I have to help them figure out why it’s not working. I choose a simple approach. A keto diet really is a low-carb diet that lets you harness the beneficial effects of ketones. A keto diet is an ultra-low-carbohydrate diet.

What is it about the keto diet that is able to help fix a lot of these problems?

The shift from worrying about fat in food to worrying about carbs or sugars and starches in food is scientifically sound. For most people, there’s an automatic reduction in hunger when you start a keto diet. You don’t have to count calories or be too mindful about how much you eat because it automatically reduces the insulin and reduces hunger. That’s why a keto diet is most known for its use as a weight loss or obesity treatment diet: as the hunger goes down, you get access to the fat store on your body and you lose weight automatically.

So, from 2006 you have refined this, you’ve got a specific protocol that is easy, sustainable, and works on just about anybody – is that correct?

Yes. It’s important to note that I didn’t make this up. This is science. What our group did at Duke with Dr. Will Yancy, is that we did the research to validate this, to publish papers showing that not only does it help with weight loss, it helps with all sorts of metabolic problems like diabetes and PCOS.

I learned from doctors who had used this approach for the last 150 years. It starts back in 1860 in London, England. And then, doctors used this approach for diabetes 100 years ago, it’s in all the textbooks. There were a few doctors, like Dr. Atkins, Dr. Eades, Dr. Bernstein, Dr. Rosedale, who were using these diets when I got interested in doing research in the late 1990s. I picked their brains. I tried to make very simple systems that had been around for a long time. The approach we use has stood the test of time and went through the validation studies and publications. When someone says, “What about this and this diet?” then I say, “Well, show me a research paper in a good journal, looking at 50 people over six months and I’ll comment on it.” Our study with that level of information was published in 2002. Now people who do PhD theses can’t study it because it’s too old!

What we’ve been using has been around a long time. We’ve tried to make it simple and easy. That’s what people tell me when they come back; they had no idea that it could be so easy. We want to lower the threshold of people worrying about doing something like this because it doesn’t have to be hard, and if all you’ve done is a low-fat version, low-calorie, you were probably fraught with hunger and that makes it very difficult. A low-carb keto diet cuts the hunger out for just about everyone in a day or two. It’s almost effortless and the science is there to back it up, so if you’re worried about long-term effects, don’t worry.

How robust is the science that we’re seeing now, regarding the ketogenic or low-carb diet?

Our role at Duke was to begin the research. Our first paper was published in 2002, about the same time Dr. Jeff Volek at the University of Connecticut (now at Ohio State University), started researching it as well. The first studies between 2004 and 2008 were all low-carb versus low fat, because the low fat diet was the prevailing champion at the time. All of the research teams said, well, we’re going to put the low-carb to the low fat, and pretty much the score was 31 to nothing that the low carb diet won in terms of obesity treatment. There’s even an infographic on a website – it’s hard now to teach all this information, but in a graphic form the score is basically 31 to nothing, low-carb wins.

It’s not that low fat can’t work. That’s an important point. It can, but low-carb is better. We try to make that distinction, that there are many ways to go about things. This one is just particularly effective, especially if you have insulin resistance, diabetes, or some other metabolic problem. The science is so solid now that if, for example, there’s a level of studies that is required for a drug to get FDA (Food and Drug Administration) approval in the US, these are called phase three trials, there’s enough research now for obesity and keto diets that this would be approved like a drug. It’s safe and effective for the use of obesity as shown in a growing number of studies, and for diabetes, too. It’s been used for 100 years to treat diabetes. You just need medical monitoring for that.

Jane asks: “I’ve heard that a keto diet can help with fertility. I have PCOS (polycystic ovary syndrome). Is this true?”

Yes. Our paper was published some years ago and I see that repeatedly in my clinic today. I’m still in practice, seeing people with the concerns and issues that are happening today and recently one of my patients came back and was very happy to announce that her menstrual cycle had returned. That may seem like a strange thing to be excited about, but because of PCOS (polycystic ovarian syndrome), she had not had a menstrual cycle for years. The metabolic changes that occur with a keto diet can bring back ovulation or menstrual cycles and it can actually become a risk that you might get pregnant! We often will tell people who are of reproductive age to be careful; they may not have been very worried about getting pregnant, but when you change the food, you might actually be able to become pregnant. If you don’t want to, take some precaution!

That just demonstrates the power of changing the food. This can happen without any weight loss at all. That’s one of the advantages of a keto diet—just changing the food has all of these improvements because you’re not burning sugar, and sugar-burning is the root cause of so many problems. So you basically turn into a “fat burning machine,” and you don’t have the same hormonal signals as you would from eating and burning sugar. Getting fertility back is one of the benefits of changing to this way of living.

Damian asks: “Should I worry about my cholesterol when embarking on this type of lifestyle?”

No. Don’t worry about it. If your doctor is worried, well, they just haven’t read the research, so don’t worry about it. We don’t check your cholesterol while you’re losing weight. As an obesity specialist, we know that cholesterol can temporarily go up while you’re losing weight. It doesn’t matter how you’re losing the weight (this is not specific to keto). A lot of doctors will falsely think that that’s a bad thing. There’s a small number of people who have lost all their goal weight and their cholesterol goes up, sometimes massively high. It’s very uncommon and actually those people have banded together to do a research study to question whether it’s harmful at all.

Amanda asks: “How much weight can I expect to lose?”

One of the first things I mention is, don’t worry about the weight at first. The first thing that has to happen is that the hunger has to go away. I’ll explain to patients that when you start this all at once, it’s a simple approach. We’ll teach you how the hunger will be gone in a day or two. That shows that you’re doing it right. Then the weight comes off, about one to two pounds per week. If you multiply that by four weeks, that’s four to eight pounds per month. You multiply that out to a year, that’s 50 to 100 pounds per year – no pills, no products, no surgery.

If what you’re doing isn’t working by two weeks into it, I ask my patients to email me or to come back to see me, because it should be working by two weeks. Sometimes there’s a water weight elevation, or sometimes you’re on a medicine that makes the hunger persist. It’s so fast. Hunger is gone in a day or two and you can lose one to two pounds per week, which is really unbelievable, just changing the food.

PrevPreviousIs a low-carb diet bad for your heart?
NextAre you addicted to sugar?Next