Does type 2 diabetes increase the risk of heart disease? 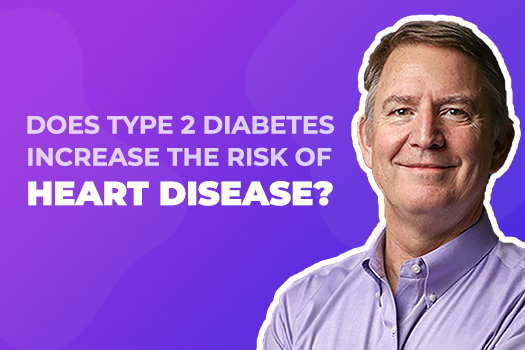 Does type 2 diabetes increase the risk of heart disease?

The evidence is clear – people with type 2 diabetes have an increased risk of cardiovascular disease. Can you explain why this is so?

Cardiovascular disease means heart attacks and strokes, which are the number one cause of mortality and disability. It’s a major, chronic disease that you don’t want to get, but it is common in modern society. The reason cardiovascular disease happens has been thought of in the past as a single-minded dietary issue. We were always taught that fat in the diet was something that caused fat accumulation in the arteries. That hypothesis or belief is fading away. When atherosclerosis (cardiovascular disease) hits the heart, it’s called cardiac disease. It could be in the aorta, the big artery of the abdomen, or the carotid, the artery going to the brain and causing a stroke if there’s narrowing and atherosclerosis there. It’s important to get all of the language correct. Atherosclerosis is the natural process of disease on the arteries that leads to narrowing and blockages; it’s the lack of blood flow because of these blockages that causes damage when the heart or the brain can’t get oxygen for a period of time.

What is the biggest risk factor that you see in your clinic today?

It’s not just my clinic, it’s in the research publications that are being done now with the hindsight that it’s not the cholesterol or fat in the food that’s the problem. When you look at independent factors counting towards the risk of heart disease and stroke, it really turns out that type 2 diabetes is the major risk factor. You can say that it’s the cause, because we know that excessive sugar can lead to damage to the arteries. Inflammation starts the damage process in these arteries.

Diabetes starts many years before, by a process called insulin resistance. If your doctor says you have insulin resistance or you have pre-diabetes, this means that you’re on that pathway toward type 2 diabetes. There is risk at these levels, even if not quite as high as type 2 diabetes. If you have elevated blood glucose, you have an increased risk of heart disease, stroke, and cardiovascular disease. You don’t want to go down that path where a doctor is talking about pre-diabetes and putting you on medicines like metformin. Most doctors today see it so commonly, they don’t like crying alarms. They say, “Don’t worry, we’ll just put you on medication.” I would rather have it be alarming and say that there are other things you can do other than medication. It’s time to take it seriously now. When the doctor says ‘pre-diabetes’, ‘insulin resistance’, or ‘metabolic syndrome’, your ears should perk up and you need to take action.

You have a solution that would mitigate these risk factors. Tell us a little bit more about that.

It’s been known for a long time that when you remove carbohydrates from the diet, the blood sugar goes down. Carbohydrates raise the blood sugar, so when you take them away, the blood sugar comes down. You can reverse, treat, and cure insulin resistance, metabolic syndrome, pre-diabetes, and type 2 diabetes with the low-carb keto diet. It was used a hundred years ago for diabetes and that was just forgotten in the ‘fat is bad’ period. Since the 1970s, everything has gotten jumbled up and confused.

A keto diet is excellent for lowering the blood glucose, lowering insulin, and reducing the risk of heart disease by addressing metabolic syndrome. Metabolic syndrome is where triglycerides are too high in the blood, HDL is too low, you have an increased abdominal circumference, increased blood glucose, and increased blood pressure. All of these things together are thought to be the cause of atherosclerosis. The keto diet addresses all of those.

How long would it take someone to reduce their risk profile?

There’s a range of time for fixing these things, but I’m struck by how fast it can happen. For example, recently I had someone who had been taking insulin for 20 years and was able to stop it in just four weeks. Whether the benefits for heart risk starts right then, I don’t know for sure, but we can actually fix type 2 diabetes very quickly. I would say most people in my clinic and in the studies that have been published, will be on less insulin or off all of their insulin by 10 or 12 weeks. Of course, the stricter you are on a keto diet, the faster it will happen.

Papers like the Virta Health Study, which has all the different staff and support, show this to be true. That Virta Health Study used an app and checked ketones. In Dr. Sue Wolver’s clinic in Richmond, Virginia, she also published a paper showing that she could reverse type 2 diabetes in the clinical practice with just the staff that they normally have. We have good evidence now published that shows you can reverse type 2 diabetes – of course, also reversing pre-diabetes, insulin resistance, and metabolic syndrome. That’s what the keto diet focuses on.

So, if you address your diabetes, pre-diabetes, and metabolic syndrome by a lifestyle change, can you expect to see your cardiovascular risk profile improve?

It can improve immediately, within three weeks off of this insulin. It’s the elevated blood glucose and elevated insulin that are the pro-inflammatory problems. A lot of people have thought insulin is a good thing to take for type 2 diabetes, but I don’t see it as a good thing. The insulin levels are already high in the blood if you have type 2 diabetes. You won’t fix it by giving more insulin. What you want to do is fix diabetes by addressing your lifestyle. There are many helpful lifestyle changes, the low-carb keto diet being one of the best, because it lowers that glucose and insulin immediately and to very low levels, often within the first few days.

Assessing how fast the risk goes down is a little harder. I’m not saying that this is going to fix your clogged arteries overnight. I’m saying that the inflammation causing the risk will go away very quickly. We don’t have great evidence yet that you can reverse the damage in the arteries, but it’s really exciting to see the process change so fast on a keto diet.

What is the take-home message?

Type 2 diabetes, pre-diabetes, insulin resistance, and metabolic syndrome are the main risk factors for atherosclerosis, which leads to heart disease, stroke and are the major causes of death and disability today. The keto diet can improve and even reverse these.