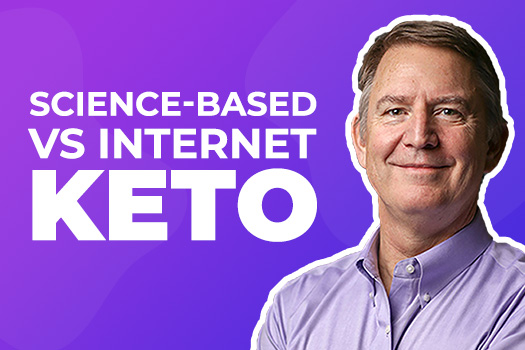 This blog is an adaptation of Dr Westman’s video on ‘Keto: Science-based versus Internet-based ’ which we have included at the bottom of this article.

Where did all this keto confusion come from?

I spend so much time these days in my office helping to get rid of the confusion from the internet. People come in saying, “It’s too complicated!” “I don’t know how to calculate my macros!” “I have to use all these apps that I don’t even know.” “It’s too expensive because I’m buying all of these keto drinks and products!”  That’s not the science-based keto; that’s the internet-based keto and it’s causing a lot of confusion.

Let’s go back 20 years when I first learned how to use a keto diet. (It was called low-carbohydrate keto then) – the approach I used was called Atkins Induction, which was used by a prominent doctor in the 1970’s, 80’s, and 90’s in New York City. We studied an approach that had been around for over 100 years. It had been used for obesity and diabetes and then just forgotten. Our role here at Duke was to formalize the science behind something that had been used by clinical doctors for a long time, and that was just changing the food so that you ate fewer carbs. There were no products, no apps, no oils, no keto brownies! You had to use just food, like ribeyes, filet mignon, and lobster – you don’t need all these other kinds of internet things. In evidence-based keto, the studies that have been done and published have good, solid science behind them, it was based on real food, not adding products.

What robust science is there? How many papers have you co-authored in terms of comparing this diet with others?

Our first paper was published in 2002. Our follow-up paper, probably the most important one in terms of getting credibility for a low-carb diet, was published in 2004. Since then, Dr. Yancy and I have about 50 papers to our names. Around the world, there are at least 100 papers – these are mostly randomized trials, meaning it’s not just hearing about someone’s experience. You recruit from the community or from a clinical practice, like at the VA Hospital (Dr. Yancy has done a lot of work there), and you bring them in, you study them, you have them fill out forms, there are pretty rigorous measurements that you go through to make sure of the certainty of your findings, so that the weight results or blood tests are complete.

These studies have now been done all around the world. It’s hard to summarize all the ones that are done now! In fact, there are now studies of studies being done – those are called “meta analyses.” So, I would say there are dozens of studies with thousands of people in those studies. These studies mainly compare the low-carb diet to the low-fat diet, because the low-fat diet is what everyone thought was best.

What sort of results came out of those studies?

When you put low-carb in a competition, a football game or a soccer game, the low-carb diet did better than the low-fat diet in almost every instance. It’s not that the low-fat diet can’t work – it certainly can work in some people – and that’s what’s confusing to a lot of people. They just want one thing that works for everyone. But, low-carb diets work as well, or better, every time these two diets were studied head-to-head.

So, it irks me when a doctor asks me if I “believe in” low-carb diets – well, yes, I believe in them like I “believe” in gravity! I mean, it’s scientifically proven! It’s settled science now that low-carb diets work as well or better than calorie-restricted low-fat diets.

Are there different types of ketogenic diets based on people’s end-goals?

When you look at a keto diet, it’s defined by lowering the carbohydrate enough so that your body starts to burn fat. You really can’t be on a keto diet by drinking ketones and eating carbs at the same time. It’s a diet change that you have to do.

You can do different types of keto diets, meaning that the carbohydrate is very low, but you have different types of proteins. I met a doctor once who told me he was doing the salmon keto diet – this was very early in my research where I thought it was all about meat and steak, but he said, “No, keto really just means keeping the carbs low,” so he was doing a fish-based keto with salmon. I’ve learned from doctors like that who use their diets and give me feedback at research meetings. So, we have not only done the science, but we present at meetings. We teach other doctors. A growing number of doctors are using this in their own practice around the world now.

Are there situations where a high-fat keto diet is necessary?

This is a common source of confusion in terms of internet-keto.

There are some relatively uncommon conditions. Many people don’t come to me to treat their epilepsy, although there is a ketogenic diet for epilepsy. It is a very strict version of a keto diet in which one needs to be careful about the macros at every meal (meaning the fat and protein balance), because in some children, if you get that out of kilter, they might have a seizure. Being careful about keeping the carbs low and monitoring the keto level can prevent seizures or reduce them significantly in this specific keto diet for epilepsy. For diabetes and obesity, you don’t have to be that strict, thankfully. So, the low-carbohydrate keto, meaning real foods, where you don’t have to worry about every meal, you don’t even have to eat every meal – you can drop meals, which leads to intermittent fasting (which is a keto diet if you keep the carbs sufficiently low).

You can see why it’s confusing for people – that there are all these different sources of information. First it was counting macros, now it’s the food quality – the idea that you have to have grass-fed beef or organic types of foods, which is a relatively minor thing. What I teach has been around for 150 years, before there were these organic sorts of things. Although, you might argue that this is just going back to what was available all that time, but food quality is another source of confusion. I’ve had patients who only ate McDonald’s and they would lose weight using a keto diet. When you think about it, you’d have burgers and no bun, no fries… while that wasn’t my first choice for the type of food to use, it’s possible to even do it with that sort of situation, if those are the tools you have.

What would you say to the folks following internet keto who feel they have to “hit their fat macros” for the day?

This is the number one problem today with internet keto – the overconsumption of fat. I think the teaching comes from people who didn’t even need keto in the first place – i.e., for weight loss or diabetes – the young people, those who are exercising. You want to be careful who you’re learning from. If they haven’t ever gone through a weight loss history or journey themselves, they may get focused on adding fats and oils and making sure you hit a macro. But, when you think about it, fat is actually a high source of calories, so if you’re trying to use a keto diet as a calorie reducing diet, you don’t want to be adding fats in drinks or foods. You want the fat that you burn to come from your body fat. This is probably one of the main sources of confusion today.

People come to me saying, “But, it had no carbs in it and you told me just to stay low on the carbs.” And I say, “No, my teaching also includes a restriction on the high-fat, high-calorie items,” because my method actually came from a clinic that had used it for 30 years (we’ve now used it for 20), and they learned by the daily practice of using this sort of diet that you had to have a limitation on the fat intake if you were trying to reduce your own body fat.

Internet keto tells us that keto is a moderate protein diet. Your science-based teachings tell us that protein is not limited – why is that?

When you use an ad-lib type of approach, meaning you let people have free access to a certain set of foods, the protein is limited automatically by the absence of hunger – hunger goes down and you eat less. For just about everyone, it’s automatic. There are a lot of eating habits or medications that might interfere with this process, but we don’t limit or worry about protein, because there’s an internal limitation on the amount that you eat. It’s pretty much automatic and you won’t believe that the hunger will go away in a day or two unless you try it. You have to go all-in when keeping the carbs low. I don’t worry about the amount of protein and I don’t have people hit a protein level or a fat level.

There may be some specific instances like epilepsy, or if someone is exercising and they’re trying to be an elite athlete – there may be these special circumstances where you want to worry about that. Again, consider the source of information that you’re getting from the internet: who’s giving it? What’s their experience? I prefer people who are teaching from a clinic background. People who have used it in their practice for 10 years and know the most important things to focus on and not to be too worried about these minor things that sometimes knock people off.

Is keto safe for folks of any age?

If you define keto as real food-based keto, it’s just food. I don’t know how I can hurt someone by having them eat eggs and steak and chicken and vegetables.

There is actually a double-edged sword using a term called “keto,” because it’s new. But, it doesn’t focus on the real aspect of evidence-based keto, which is based on real food, not products or adding fats and ketones. Protein is the most important macronutrient to consume. You get fats with protein and there’s an automatic limitation for just about everyone. So, yes, I think keto is safe for everyone, if you think of it in that way.

I’m noticing in our area that the stores now have many keto products and they’re not good for a keto diet. Be careful with the new products coming out that don’t limit the fats and the oils. If they give you an upset stomach and gas, that’s not the diet doing it; it’s those darn products!

NextWhy My Method of Keto Has to WorkNext