How to get rid of skin tags – Adapt Your Life® Academy 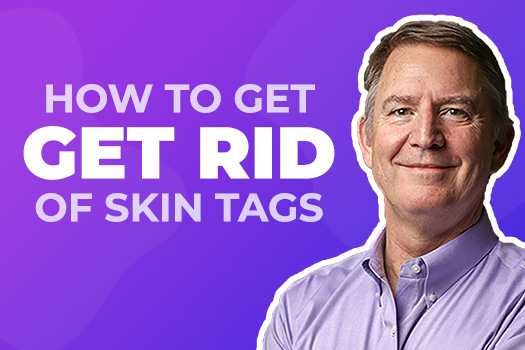 How to get rid of skin tags

Skin tags are non-cancerous growths on the skin. It has been said that high insulin or insulin resistance in the body may be the culprit. What say you, Dr. Westman?

That’s right. You might wonder why we talk about skin tags. Well, they can be bothersome and worrisome. They are a telltale sign of internal metabolism, of what’s going on inside. It’s pretty interesting. You can use that as a physical diagnosis tool when you look at somebody and you start seeing these growths.

Skin tags also go along with a velvety, black or brown growth, called acanthosis nigricans. These are two skin issues that are a result of high insulin levels. While we can’t prove that in a petri dish, the proof of it is that they go away for most people when you change the diet, especially when you do a keto type of diet.

What success rate do you see in your clinic with helping people get rid of skin tags?

I’d say it’s not 100%, but maybe about 50% of people will have resolution. Some people even have them fall off.

You have to understand what insulin does. Insulin is a growth hormone that pushes the systems in the body toward growth, like during adolescence and puberty, where you’re growing fat cells. Growing obese is the same phenomenon. Insulin also helps cancers grow. One of these little known things that also is very popular is to think of doing a keto diet with cancer, because the keto diet is one of the best dietary approaches to lower insulin levels. The mechanism is pretty simple. Dietary carbohydrates (sugars and starches) raise the blood sugar (blood glucose) and insulin lowers the glucose. The body doesn’t like glucose to be high, so it sends out insulin to lower it.

One of the unintended side effects of high levels of insulin being around to lower the blood glucose is excessive growth, including skin tags.

So many things are a result of high insulin levels, over a period of years, generally. The good news is that you can reverse these chronic complications of too much insulin by doing something like a keto diet, because it lowers the insulin levels by changing the food.

What percentage of acanthosis nigricans reversal do you see?

With that one I see a little bit of a higher rate of reversal. It’s where you see a velvety skin appearance; some people even think it’s dirt, so they try to wash it off, but it can’t wash off.

Some of the tragic stories we hear is that parents try to scrub it off their children. It’s not dirt, so you can’t scrub it off. It forms when too much insulin is going around the body and in just about every case, it’s because of too much food, too many carbs. You need to just track back and lower the insulin by lowering the carbs by doing something like a keto diet. It’s a pretty simple fix.

What timeline could one expect for reversing these skin conditions after starting a keto diet?

There are some things on a keto diet that get better overnight – in some children seizures go away overnight, which is amazing. In other people the diabetes medicine has to be reduced overnight, because the blood sugar comes down so fast. Acanthosis nigricans or skin tags (formally known as acrochordon) takes maybe weeks to months. I don’t think of it as something that’s going to go away overnight, not like cravings and hunger, which can go away literally overnight. That’s what’s so phenomenal about a keto diet for weight loss—the hunger and cravings go away so fast. It’s unlike any other dietary approach that we have, because the fat burning that you start generating cuts your hunger out really fast. It usually takes only a day or two, unlike these skin conditions. Be patient with it. It’s a phenomenon of long-term insulin levels, so it takes a longer period to go away.

Are there any other negative medical side effects of skin tags?

I don’t think so. They’re a benign skin growth, unlike cancer. (“Benign” except that they indicate that you may have chronically elevated insulin.) If you have them on the neck or face (it is common to have them on the neck), they are more of a cosmetic thing. You can have them surgically removed but they’ll tend to come back if you don’t resolve the underlying condition. I might add that other skin conditions get better as well, things like eczema and psoriasis, which are probably from the inflammation caused by food.

Acne is another skin condition that can be improved on a keto diet, correct?

Absolutely. That’s huge. It turns out that this excessive growth also affects the pores of the skin and acne can be exacerbated or even brought on by carbohydrates and insulin and inflammation. One of the curious professors I’ve met came up to me after a lecture that I gave at a university and said that he visits a remote area of South America where they’ve never had sugar. He told me that in that community they didn’t have acne during puberty. It wasn’t something that they never saw, because it is sugar that causes acne.

We don’t have, that I’m aware of, randomized trials to show that, but it’s one of these phenomena that’s very common. When you read books that dermatologists write, generally they recommend no sugar in the diet, because the skin does better without it. If you have difficulty with acne, I would say give keto a try. I think this is a healthy diet – not “internet keto,” but food-based keto – is healthy for anyone, any age, including teenagers. The only time I worry is if someone is on medication and the medication might become too strong while on the diet. What we really are promoting with a keto diet is healthy foods, minus the sugar starch.